VAERS data released Friday by the Centers for Disease Control and Prevention included a total of 1,168,894 reports of adverse events from all age groups following COVID vaccines, including 25,158 deaths and 203,888 serious injuries between Dec. 14, 2020, and March 4, 2022.

The Centers for Disease Control and Prevention (CDC) today released new data showing a total of 1,168,894 reports of adverse events following COVID vaccines were submitted between Dec. 14, 2020, and March 4, 2022, to the Vaccine Adverse Event Reporting System (VAERS). VAERS is the primary government-funded system for reporting adverse vaccine reactions in the U.S. 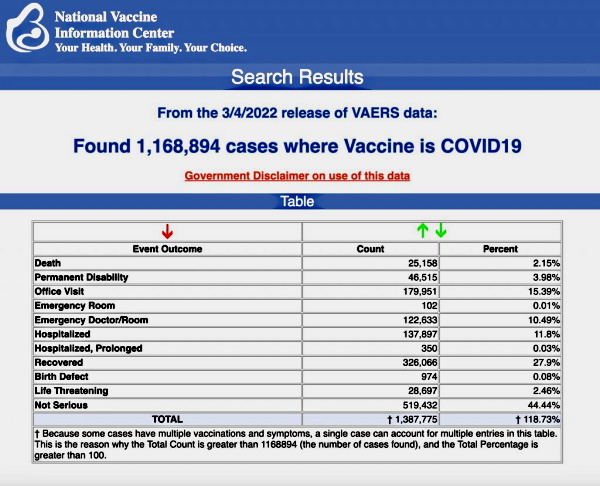 The most recent death involves a 7-year-old boy (VAERS I.D. 2152560) from Washington who died 13 days after receiving his first dose of Pfizer’s COVID vaccine when he went into shock and suffered cardiac arrest. He was unable to be resuscitated and died in the emergency department.

The CDC uses a narrowed case definition of “myocarditis,” which excludes cases of cardiac arrest, ischemic strokes and deaths due to heart problems that occur before one has the chance to go to the emergency department.

The most recent death involves a 14-year-old boy (VAERS I.D. 2148498) who experienced a cerebral aneurysm leading to death one day after receiving his first dose of Pfizer’s COVID vaccine.

A study funded by the CDC and published Monday in The Lancet concluded most COVID vaccine-related adverse events reported during the first six months of the rollout in the U.S were “mild and short in duration,” despite thousands of deaths reported to VAERS.

For the study, researchers analyzed data captured between Dec. 14, 2020, and June 14, 2021, by VAERS and v-safe, both of which are overseen by the CDC. Nearly 300 million doses of COVID vaccines were administered during the study period.

The authors found that of the 340,522 adverse events reported to VAERS, 27,023 (8%) were serious, 4,496 were deaths. The authors said the cause of the increased reporting of deaths during the first few days after vaccination might represent “reporting bias.”

The authors suggested that deaths occurring soon after vaccination were more likely to be reported than deaths that occurred later. This, they believe, is why the number of deaths asymptotically approaches zero as more time elapses since vaccination.

Florida’s surgeon general on Monday said he will issue guidance formally recommending against COVID vaccines for healthy children. Florida is the first state to break with official guidance from the CDC, which recommends all children over age 5 get the vaccine.

Dr. Joseph Ladapo made the announcement at a roundtable, hosted by Gov. Ron DeSantis, featuring physicians and other medical experts who criticized CDC and government policies, including mask mandates and lockdowns, which they said were ineffective and harmful.

Ladapo and DeSantis said the new guidance had to do with lingering questions about the vaccines’ potential health risks for young people and the fact that children are in a low-risk category for severe COVID.

COVID vaccines may be enhancing disease

COVID vaccines may be causing enhanced disease because they target an old version of the coronavirus, Dr. Robert Malone told the Epoch Times in a recent interview.

“The data are showing that vaccination can actually increase the risk of being infected with the Omicron version of this virus,” Malone said, referring to how in some areas, including Scotland and New Zealand, patients hospitalized with COVID are more likely to have received a COVID vaccine.

Some adverse events reported following COVID vaccination “could indicate” VAED, according to a CDC team.

“Given that these enhanced responses are triggered by failed attempts to control the infecting virus, VAED typically presents with symptoms related to the target organ of the infection pathogen,” they added.

Dr. Gregory Poland, director of the Mayo Clinic’s Vaccine Research Group in Rochester, Minnesota, developed life-altering tinnitus, or ringing in the ear, after receiving his second dose of a COVID vaccine.

“It was like someone suddenly blew a dog whistle in my ear,” Poland told MedPage Today. “It has been pretty much unrelenting.”

Poland then received a booster, after which his tinnitus briefly disappeared but then returned at a slightly higher pitch. Poland realized his life may never be the same and says he has received emails from people across the world struggling with the same condition to the point they’re considering taking their own lives.

Poland, who said he supports COVID vaccines, believes there may be tens of thousands of people affected in the U.S. and is calling for more research to be done to provide help to people desperate for relief.

Tatum Strieter-Byron is asking the federal government to compensate her for the death in April of her mother Sandra Jacobs. An autopsy confirmed Jacobs died from a blood-clotting disorder caused by J&J’s COVID vaccine.

Strieter-Byron received confirmation Monday her claim to the Countermeasures Injury Compensation Program (CICP) had been received. The program was established to give pharmaceutical companies blanket liability protection from harm caused by their COVID vaccines.

The only exception under the PREP Act is if a plaintiff can prove a vaccine-related death or serious physical injury was caused by “willful misconduct.” The protections, unless amended or rescinded, extend through Oct. 1, 2024.

Claims to the CICP must be made within one year of the date the vaccine was received.

Jacobs died on April 21 of “complications of cerebral venous sinus thrombosis,” a type of stroke caused by the vaccine.