India is currently witnessing a COVID-19 surge of unprecedented proportions, with an allegedly triple-mutant strain stretching the nation’s healthcare infrastructure to the limits.  The uncertainty hanging over the nation is compounded by viral despatches of dead bodies piling up in morgues; of people dropping dead in the streets; of despondent souls jumping off their balconies; and of funeral pyres all over the country. There will be no public service-minded Big Tech censorship in this instance.

This is supposedly Wuhan 2.0. Any social media addict would be forgiven for thinking that India’s population of 1.3 billion might suffer a dip before the year is out.

Amidst the toxic miasma of fear-mongering, coherent explanations over this surge are hard to come by. Therefore, one needs to resort to correlations and proxies in order to gauge causations and effects. For starters, one should compare the yearly death tolls (from all causes) before and after the advent of COVID-19 in India, particularly for the year 2021. But relevant data will only be available a year from now. Many will die as a result of continued lockdowns which generally weaken the immune system. Essential medical procedures will be deferred as hospitals are compelled to focus on COVID-19.  Rising socioeconomic despair will naturally lead to a surge in suicides. In the end, not all coronavirus deaths can be directly attributed to the virus no matter how “experts” add them up.

Other correlations must also be explored in the Indian context. India was rather late in joining the mass vaccination bandwagon. Throughout 2020, its COVID-19 mortality figures were moderate by global standards due to the efficacy of low-cost treatment protocols. Hydroxychloroquine (HCQ) was sanctioned for early stage treatment from March 2020 onwards; while a few months later, India’s most populous state of Uttar Pradesh (population 231 million) replaced HCQ with ivermectin (an anti-parasitic drug).

The results were highly encouraging. As the TrialSiteNews (TSN) reported on Jan 9 2021:

By the end of 2020, Uttar Pradesh — which distributed free ivermectin for home care — had the second-lowest fatality rate in India at 0.26 per 100,000 residents in December. Only the state of Bihar, with 128 million residents, was lower, and it, too, recommends ivermectin.

Despite having the coronavirus situation under control, New Delhi was under immense pressure from various international lobbies and their local proxies to roll out a mass vaccination campaign. It can be argued that India’s ongoing oxygen shortages are the direct result of prioritizing foreign-curated experimental vaccines over local necessities.

While the initial mass vaccination launch was pencilled for Jan 16, the campaign effectively took off only in late February. With uncanny timing, the New York Times hailed India as an “unmatched vaccine manufacturing power” that could counter China in the area of vaccine diplomacy.

As the goal of vaccinating 300 million people by August 2021 neared the midway mark, however, the number of COVID-19 cases surged accordingly. The graph below broadly charts this anomaly. 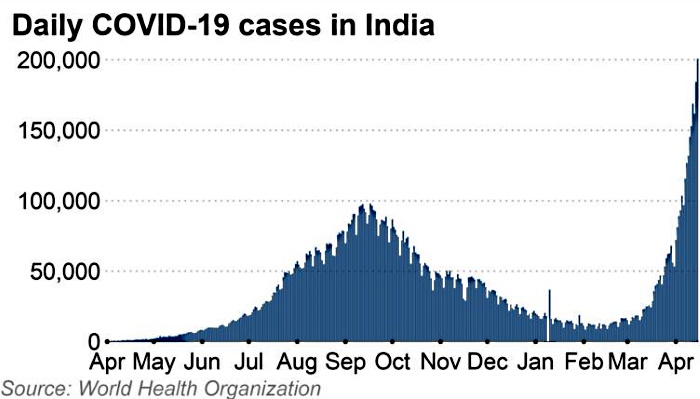 Not only has India’s COVID-19 cases surged in tandem with increased vaccination, the trajectory of infections and inoculations can be neatly superimposed as the following graph suggests. 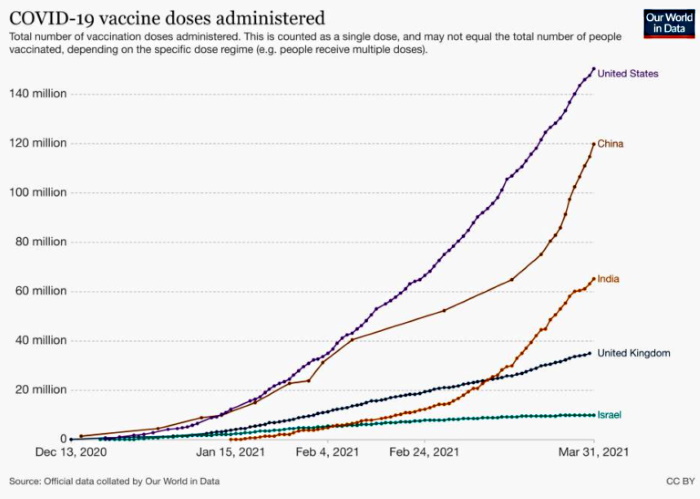 Can one infer that there may be a correlation between increased vaccinations and infections? This is not the first time that gene-based therapies ended up creating new viral chimeras. The World Health Organisation (WHO) recently admitted that a Bill & Melinda Gates Foundation (BMGF)-backed vaccine program was responsible for a new polio outbreak in Africa.  The usual suspects were also behind a vaccination-linked polio surge in Pakistan and Afghanistan.

Vaccines causing deadly outbreaks of the very diseases they are supposed to eradicate happen to be a 21st century phenomenon – brought to you by an unholy alliance of Big Tech and Big Pharma. In the process, new mutant strains or “vaccine-derived viruses” emerge, necessitating even more potent vaccines which deliver greater profits and levers of global control to Big Tech. This is how the Davos cabal tries to stay relevant in a century that should otherwise be dominated by Asia. India may end up being the first Asian victim of Big Tech’s Great Reset against the East.

A recent study by Tel Aviv University may shed further light on India’s bizarre surge. It seems those who have been vaccinated with the Pfizer-BioNTech vaccine are 8 times more likely to contract the new South African variant of COVID-19 than the unvaccinated.

The Covishield (Oxford University-AstraZeneca) and Covaxin (Bharat Biotech) vaccines used in India may have produced a similar effect. Dr. Harvey Risch, a professor of epidemiology at Yale University, has estimated that over 60 percent of all new COVID-19 cases seem to occur among the “vaccinated.” Dr Michael Yeadon, former vice president and chief science officer for Pfizer, fears a more alarming outcome which includes the possibility of “massive-scale depopulation”. These are not your average basement-dwelling conspiratorial kooks!

“The vaccine,” to paraphrase Francis Bacon, “is now appearing to be the worse than the disease itself.” Gene-based vaccines open up a Pandora’s Box of what systems theorists call “emergence”. The human body is a complex system that may react unpredictably to interferences at its most substrate (or genetic) levels. As a result, mutant virus strains may emerge alongside unforeseen side effects. This is what we are witnessing worldwide.

But as the virus mutates, so does the official narrative. The Indian Medical Association (IMA) now claims that mass vaccinations in densely-packed stadiums and halls are “superspreader” events. Is the IMA suggesting that new vaccine delivery systems, as lobbied by Big Tech, will solve this problem? Let us wait and see. Furthermore, is close proximity the prime culprit behind the super-surge in India? India is a nation where trains, buses and all forms of public spaces teem with human bodies. Yet, it did not lead to mass casualties in 2020 as many had feared.

In the absence of a watertight scientific explanation from mainstream gatekeepers, a more plausible narrative may be sought from peripheral sources. The Daily Expose offers one such graphic-laden narrative to explain the correlation between mass vaccinations and the rising death toll in India. 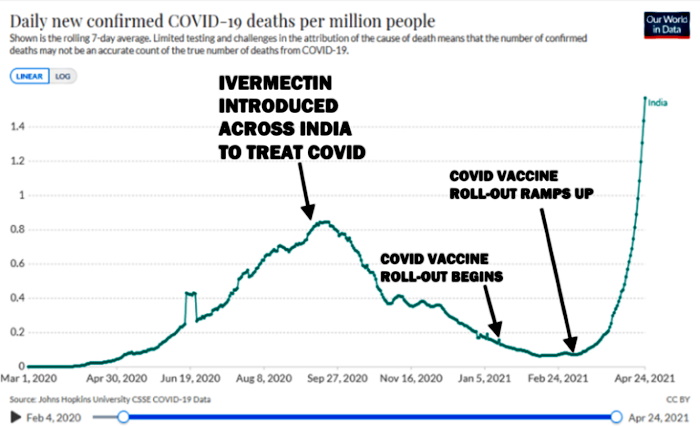 While the Daily Expose concedes that correlation does not always equal causation, a similar pattern was noticed in other nations. The vaccination-mortality graph for Mongolia, for example, is particularly eye-popping. 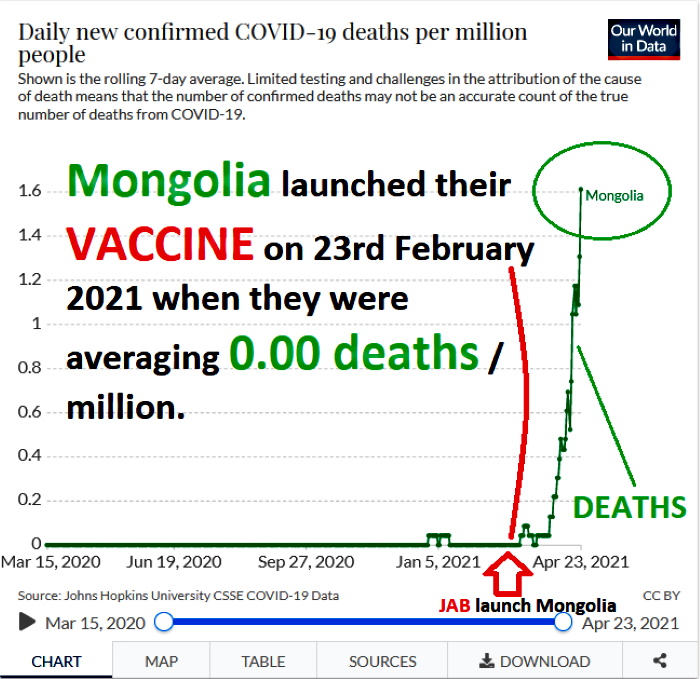 Did Mongolia witness a near-zero to mutant COVID-19 surge just when mass vaccinations rolled out? How coincidental can that be?

The Case of America: Red vs Blue States

One may scientifically argue that India’s surge had nothing to do with ramped-up vaccinations. A new mutant virus may also somehow explain the vaccination-mortality correlations in Mongolia.

Therefore one should resort to another layman-friendly proxy to see whether similar correlations exist elsewhere. How about a comparison within the most coronavirus-affected nation on earth – the United States of America?

Reports thus far suggest that US states which have been resisting mass vaccinations and/or mandatory masking, at least in relative terms, are generally faring better than those adhering to draconian COVID-19 guidelines. Just weeks after Texas lifted its public mask mandate – featuring full crowds at bars, restaurants and concerts  no less – COVID-19 cases as well as hospitalizations dropped to its lowest levels since October 2020. The current White House occupant, who continues to make a buzz over his mental acuity, nonetheless panned the move as a symptom of “Neanderthal thinking”.  In the meantime, South Dakota Governor Kristi Noem, a prominent opponent of mandatory masking, is using COVID-19 restrictions elsewhere to lure businesses to her state. Other red states such as Florida and Arizona have moved to ban the so-called vaccine passports.

Rather coincidentally, the annual flu has virtually disappeared in the United States since the onset of the pandemic. It must be a modern medical miracle!

How will India fare?

With the surge affecting the nation badly, the CEOs of Google, Microsoft and Apple, among others, have pledged heartfelt aid to India. With friends like these, one wonders why Indians cannot question the global COVID-19 narrative on Twitter, Facebook or YouTube without being summarily banned or censored. If India can concede the digital rights of its own citizens and the digital sovereignty of the nation to Big Tech, then how is it going to crowdsource solutions for COVID-19? Or deal with any other future crisis for that matter? An Indian scientific paper which tentatively explored a laboratory origin for COVID-19 can be summarily removed after concerted condemnation from Western academics but a similar claim made by the former head of the US Centers for Disease Control (CDC) appears relatively palatable. Isn’t this a textbook example of neoliberal racism?

Indians should also question why Africa has not been badly affected thus far, despite a South African variant hovering in the region. This is a continent mired in conflicts, poverty, serious healthcare deficits and other Third World-related woes. It lacks world-class scientists and institutions which India admittedly has. Is it because Africa does not pose an economic threat to the Western oligarchy the way Asia does? Or maybe, mass vaccinations haven’t yet taken off in Africa?

For the time being, India cannot reverse course on its vaccination drive and adopt measures similar to the one employed by the Eisenhower administration during the 1957-58 Asian Flu pandemic. The fear genie is already out of the bottle. Big Tech controls the digital narrative in India as it does elsewhere. Even if New Delhi manages to tame the COVID-19 crisis within the next few weeks or months, Big Tech will still be around to stifle India’s destiny.

Ultimately, this game is much bigger than COVID-19; it is about global domination through perennial mass-manufactured crises until a Great Reset is achieved.