The Justice Centre represents close to 100 individuals who have been ticketed for allegedly breaching public health orders in BC, AB, SK and ON for allegedly participating in peaceful protests, not wearing a mask, providing services during lockdowns, not complying with public health guidelines on signage, and other issues surrounding the Charter freedoms to move, travel, assemble, associate, worship and express themselves. So far, all COVID-related tickets issued to rally demonstrators in Alberta that the Justice Centre has defended have been withdrawn by Crown Prosecutors before trial. 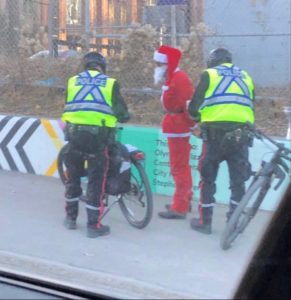 Ryan Audette (pictured at right) is a Calgary man who was issued a $50 ticket at the end of November, for allegedly not wearing a mask, while exercising his Charter rights to attend a peaceful protest against lockdowns. An estimated one thousand people were at the rally in downtown Calgary.

The ticket for not wearing a mask in a “public premise” was first issued to Mr. Audette under the Calgary Face Covering Bylaw. Calgary Police Service Constable L. Clarke seemed confused about whether the Bylaw mandated mask-wearing outdoors or only indoors. The Bylaw defines “public premises” as “all or any part of a building, structure or other enclosed area to which members of the public have access as of right or by express or implied invitation[.]” On March 2, 2021, Calgary Crown Prosecutor Maggie Burlington notified the Justice Centre that the ticket will be withdrawn. 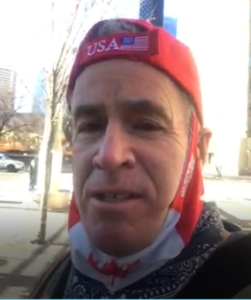 Trevor Marr (pictured left) was issued a $1200 ticket under the Public Health Act after getting off a C-train and noticing a protest rally on December 19 in downtown Calgary. After noticing the large crowd, Mr. Marr decided to make a spur of the moment decision and go and listen. Says Mr. Marr, “I agreed with what the Speaker was saying, the restrictions resembled Communist China more than freedom-of-speech-Canada. It felt good to live in a Democracy where I thought we were free to protest!”

Calgary Police officers subsequently ticketed Mr. Marr $1200 under the Public Health Act, for allegedly contravening an order of the Medical Officer of Health. On February 25, 2021, the Justice Centre was advised that the Crown was withdrawing the ticket. 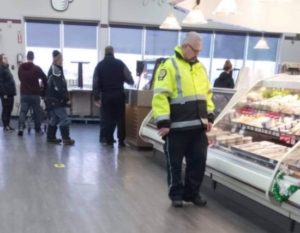 Bernie Driedger (pictured at right) is a primary care paramedic who was issued a $1200 ticket on December 22, 2020, for not wearing a mask while buying a turkey and ham in a small Co-op grocery store in La Crete, Alberta. He was photographed, he believes, by a “nosy out-of-towner going around town taking pictures of La Crete residents and businesses because the majority of people refuse to wear masks.” “I believe the photo was sent in to the provincial snitch line,” he explains.

Mr. Driedger says he has lost trust in his fellow citizens and has since moved out of the community. He received a three-day suspension from work because of the photograph. “On a personal level, I believe wearing a mask is unnatural, unsanitary, and predominately anti God… I believe it to be symbolic. Wearing a mask shows the world I am easily compliant and am a willing participant in orders unsubstantiated by proper science or reason. This also shows that if I give a little on my convictions here, maybe I will give more in the next rollout of unjust violations of our freedoms,” he explains.

Mr. Driedger’s ticket has been withdrawn by the Provincial Crown Prosecutor. 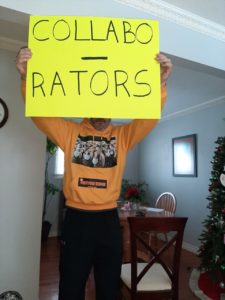 Trevor Simpson (pictured left) is a Calgary man who was ticketed $1200 for allegedly not practicing safe social distancing, at a lockdown protest in Calgary on Boxing Day. He says police waited until he was three blocks away from the rally and alone, and was blocked by four Calgary Police Service officers on bicycles. “It was really outlandish to me that they would wait until I was no longer breaking the law to actually fine me!” says Mr. Simpson. “I told the police as they were writing the ticket that it went against my Charter rights and I did not believe the ticket was legal and fair.”

Mr. Simpson’s ticket has been withdrawn by the Provincial Crown Prosecutor.

“Public health officials are not the supreme law of the land – the Constitution is,” noted Jay Cameron, Litigation Director for the Justice Centre.  “A significant portion of the arbitrary and confusing public health orders which have so oppressed Canadian society are, on their face, unconstitutional and cannot be justified.  As a result, many of the tickets issued for the supposed violation of such orders will never be prosecuted.  We expect the mass withdrawal of Covid tickets to continue as prosecutors across the country correctly decide to stay charges.”