Brnovich describes the mandate as “one of the greatest infringements upon individual liberties, principles of federalism, and separation of powers ever attempted by an American President.”

Arizona Attorney General Mark Brnovich announced he is suing the Biden administration over the COVID vaccine mandate on federal employees and businesses with over 100 employees.

Brnovich describes the mandate as “one of the greatest infringements upon individual liberties, principles of federalism, and separation of powers ever attempted by an American President.”

I promised Arizonans that we would not stand for the Biden Administration's egregious federal overreach on vaccine mandates.

Today, we have filed the first lawsuit in the nation against the unconstitutional mandates. Arizona will not tolerate this assault on our sovereignty. pic.twitter.com/1eHAUX8GYs

Brnovich states in his press release: “The federal government cannot force people to get the COVID-19 vaccine. The Biden Administration is once again flouting our laws and precedents to push their radical agenda. There can be no serious or scientific discussion about containing the spread of COVID-19 that doesn’t begin at our southern border.”

The administration has not written or clarified the mandate’s rules. Brnovich said his “lawsuit is valid because it seeks to declare that the federal government doesn’t have the authority to create such rules.”

A reporter asked about Brnovich’s office recognizing federal safety regulations regarding hard hats at construction sites. The AG told the reporter, “Stay tuned for the next lawsuit.”

Um, hard hats don’t inject a substance into your body. But don’t get me started on federal safety regulations because a libertarian could go on forever about them.

Let’s get to the brief.

Brnovich cites the Equal Protection Clause in his brief due to the Biden administration exempting illegal aliens from the vaccine mandate.

The Equal Protection Clause falls under the 14th Amendment, Section 1: “No state shall make or enforce any law which shall abridge the privileges or immunities of citizens of the United States; nor shall any state deprive any person of life, liberty, or property, without due process of law; nor deny to any person within its jurisdiction the equal protection of the laws.”

Brnovich explains in the complaint why the mandate violates the clause:

7. Although the precise contours of the federal vaccination mandates are not yet clear, the violation of the Equal Protection Clause is already evident and egregious. In a nutshell: unauthorized aliens will not be subject to any vaccination requirements even when released directly into the United States (where most will remain), while roughly a hundred million U.S. citizens will be subject to unprecedented vaccination requirements. This reflects an unmistakable and unconstitutional—brand of favoritism in favor of unauthorized aliens.

8. This discrimination in favor of unauthorized aliens violates the Equal Protection Clause. Notably, alienage is a suspect class that triggers strict scrutiny. More typically (and almost invariably previously), this discrimination was against aliens rather than for them. See, e.g., Graham v. Richardson, 403 U.S. 365, 371, 375-376 (1971); Application of Griffiths, 413 U.S. 717, 721 1973). But the same principle applies to favoritism against U.S. citizens in favor of aliens. Defendants’ actions could never conceivably pass strict scrutiny.

“Because Defendants’ respect for individual rights vis-à-vis vaccination mandates appears to extend only to unauthorized aliens, and not U.S. citizens, their actions violate the Equal Protection Clause and should be invalidated,” continues Brnovich. “American citizens should be entitled to treatment at least as favorable as what Defendants afford to unauthorized aliens. This Court should accordingly declare this preferential treatment unlawful and enjoin actions taken pursuant to it.”

Remember when Biden’s Chief of Staff Ronald Klein retweeted this? 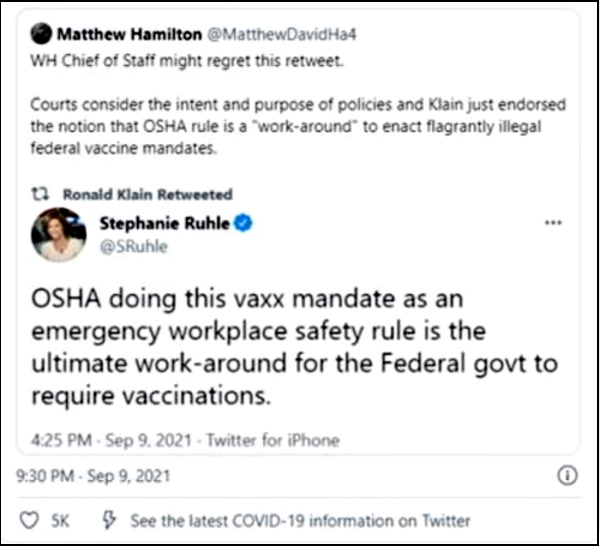 Lawyers said the retweet would cause problems for Biden. Well, it has because Brnovich brings it up in the complaint:

13. Recognizing that the Federal Government lacks the authority to directly impose a mandate, even the President’s own Chief of Staff retweeted that what the administration was planning for citizens (but not unauthorized aliens) would be the “ultimate work-around.”

14. The inadvertent admission in the preceding paragraph makes all of the administration’s actions constitutionally suspect. These other violations will be the subject of future challenges. Courts will have an opportunity to review and invalidate those forthcoming mandates as to private employers, federal contractors, federal employees, and health care workers. But this particular component—i.e., the unconstitutional discrimination against U.S. citizens, lawful permanent residents, and aliens lawfully residing and working in the U.S.—is ripe for judicial review and invalidation now.