Did you know that atmospheric viricides are being deployed into the air we breathe? They are being used in public spaces and in public schools. These products claim to stop the spread of viruses and other airborne pathogens, but could they be making our air more toxic? The EPA doesn’t think so.

Grignard Pure has deployed their atmospheric viricide in St. Simons Presbyterian Church in Georgia. They claim it is making the air safer. 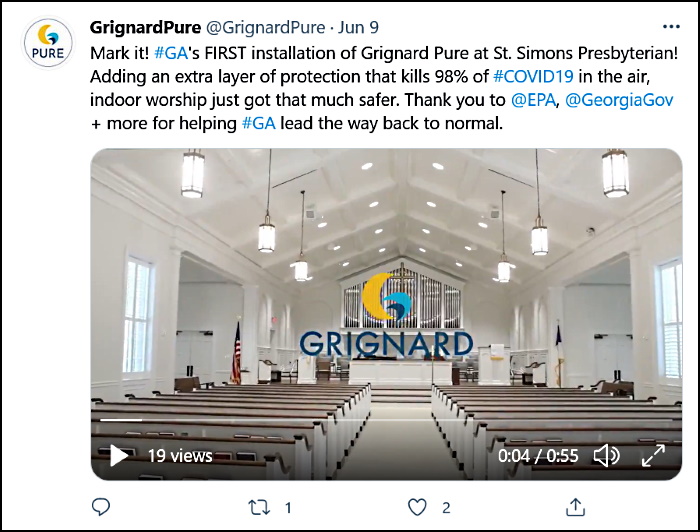 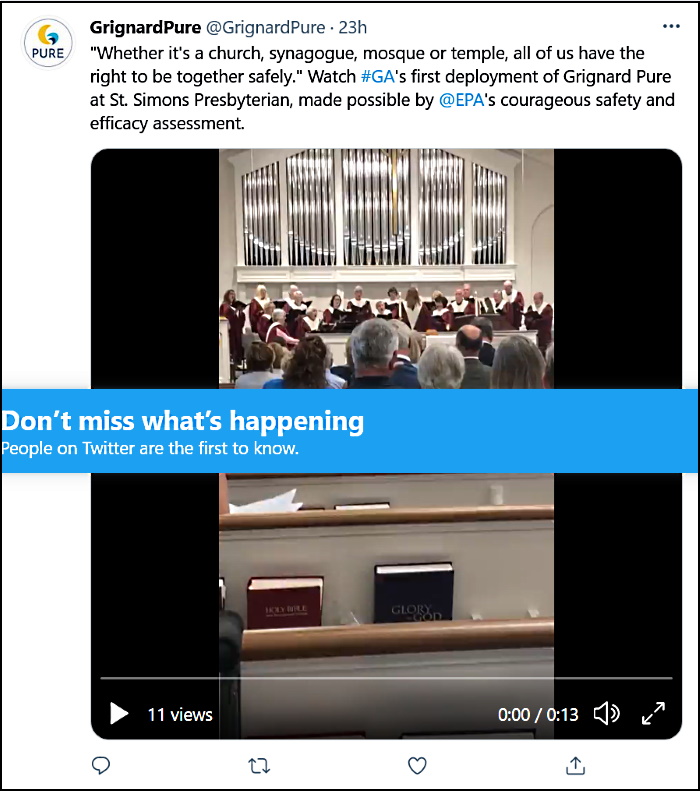 Grignard Pure’s viricide will also be deployed soon at a Major League Baseball stadium, Cincinnati’s Great American Ball Park. “The Cincinnati Reds have agreed to serve as a beta site for the viricide as the club looks forward to a shortened MLB season possibly beginning in July.”

How does Grignard Pure kill viruses, including COVID-19? According to their website:

How does Grignard Pure kill the Sars-CoV-2 virus?

Grignard Pure delivers what is called “continuous intervention,” which simply means that the air treatment solution is constantly working to fight against the virus. The Grignard Pure solution is aerosolized and forms a vapor in the air that actually condenses on virus particles and permeates into it, disrupting the protein and membrane structure of the virus with its amphiphilic properties. What this simply means is that Grignard Pure can kill the virus as the pathogenic particles leave the person from talking, coughing, sneezing – significantly reducing what is the primary cause of infection.

This vapor may kill the viruses as they “leave the person”, but what happens when this aerosolized vapor is inhaled, or comes into contact with our eyes or skin? Grignard Pure’s active viricide ingredient is Triethylene Glycol (TEG). TEG’s safety data sheet indicates it can be an eye, skin, and respiratory irritant. However, the EPA has approved its use under Section 18 of the Federal Insecticide, Fungicide and Rodenticide Act (FIFRA).

According to the Grignard Pure’s website, “The EPA reviewed all available data on this product’s safety and concluded that it does not pose any health risks of concern. We have put Grignard Pure through rigorous safety testing. Government and other third party testing have shown the active ingredient in Grignard Pure to be safe.”

Children’s Health Defense has reported that there are some concerns regarding this EPA approval:

In an example of the revolving regulator-industry door, a four-decade veteran of EPA pesticide regulation is now a leading consultant for Grignard, helping the company market the anti-COVID fluid as the solution to a “critical challenge.”

“Meanwhile, outgoing EPA Administrator Andrew Wheeler touted Grignard Pure as a “first-of-its kind” tool to “help fight the spread of the novel coronavirus,” vowing in the agency’s press release that “There is no higher priority for EPA than protecting the health and safety of Americans.”

Should we be concerned about these EPA approvals? Would the EPA approve something that might be toxic? A few things come to mind: asbestos, pesticides, and lead. There are currently almost 400 Notices of Intent to Sue the U.S. Environmental Protection Agency (EPA).

Synexis has a strong demand for its system and has recently formed a strategic partnership with Trane® (Trane Technologies). Grignard Pure is currently “in discussions with the EPA to pursue a national approval which would cover all indoor activities”.

Atmospheric viricidals could soon be deployed in a public space near you.

Alicia Green is an instinctive researcher and writer, with BA in Psychology and BS in Advertising. She gained her first experience as an investigative news reporter while working for a student-run news publication, providing breaking news and information on issues affecting the university and local community.

Alicia Green is a contributing writer at Truth Comes to Light.

Alicia Green welcomes your comments and feedback on her articles. If you have a topic or issue you would like her to investigate, please reach out to her here: