by Nelleus, Contributing Writer at Truth Comes to Light
October 27, 2021

It’s hard to keep up with all that’s happening throughout Australia. Governments continue their push for total control  of every aspect of our lives.  At the same time, large numbers of Australians are waking up, standing up and speaking out against this assault on their freedom.

Most know by now that the Victorian government has made vaccination mandatory for “authorized workers“.  Read  Victoria’s COVID-19 vaccine mandate for authorised workers explained.

Woolworths and Coles supermarket chains have announced mandatory vaccination for all staff. They will sack employees who fail to comply.

Police in Victoria are making the news because more than 40 police were recently stood down from duty for failure to get the jab.

I haven’t been able to find information related to Australian Federal Police and vaccine mandates. The fact that it’s so hard to find makes me suspicious.

Australia’s bureaucrats have created a “special” list of people who don’t have to obey the “no jab, no job” rule.

We can confirm that among the exempt from mandatory vaccination are security guards and lawyers — all of whom have more physical contact with the public, by far, than the average citizen. Criminal lawyers not only interact with the public and courts regularly but also visit clients in jail. Yet they are exempt and the average person is not.

Then there is the exemption for court staff who have contact with all the people entering the courts each day.

This is “the elephant in the room” that no politician, nor any person enforcing these mandates on others, is prepared to address. Why aren’t they asking? Is it not  bleeding obvious? We would all love to hear Daniel Andrews’ rationale and reasoning behind this.

As if to prove there is no limit to this tyrannical insanity, Victoria’s Premier Daniel Andrews announced that people who are “fully vaccinated” against Covid-19 will only remain as such if they agree to receive all existing and future booster shots. See the article Daniel Andrews gives Vaccine Mandate EXEMPTIONS, but only for his mates by The Expose: 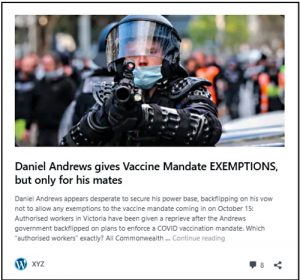 Many of us have wondered why the state of Victoria seems to be leading the way along the path to total tyranny.  However, after learning that Victoria has been sold out to the globalist Strong Cities Network and China’s Belt and Road Initiative, the dots are starting to connect. Melbourne is the only city in Australia that has this “strong cities” classification. (Somehow the whole state of Victoria is included on the strong cities list.)

Is this a clue as to why Victoria is experiencing a “special treatment” — a faster transformation than the rest of Australia into a full police state?

See Has Australia’s State of Victoria Sold Out to the Soros-Backed Strong Cities Network (SCN) with PRIVATISED POLICE? by Constitution Watch. 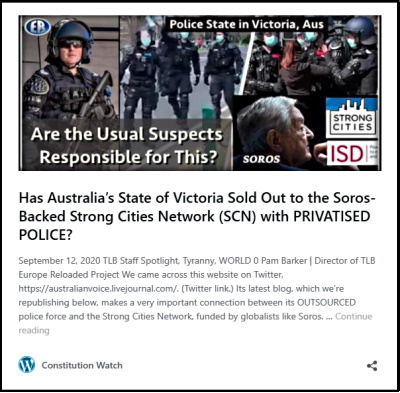 More globalist control madness is hitting Australians in the form of drafted legislation which will force a Digital Identity onto all Australians by the end of 2021.

Meanwhile, Victorian Police are no longer reserving their bash and assault operations just for protestors. They are now attacking ordinary citizens who are just going about their everyday business (who the police suspect may be committing a crime because they are, “God forbid”, sitting on a park bench). The crime here, which resulted in a woman being pinned to the ground by police, was that she did not want to give her name and address. See
Avi Yemini steps in for woman violently arrested in Melbourne,

Division by Tyrannical Design — The Vaxxed vs the Unvaxxed — (Hunger Games Revisited?)

We get a glimpse of that dynamic at the recent peaceful protest in St. Kilda, Victoria — an inner seaside suburb of Melbourne.  As some protestors walk together through the streets, others picnicked on blankets outside of restaurants where they are not allowed inside unless they are vaccinated.

In the video of this event by Real Rukshan —  at 00:45 timestamp — the camera pans to an outdoor café area beneath the Woolworths Supermarket sign. A presumably “vaxxed” man leans over his segregated eating area to yell at the passing protestors. When approached by police, he makes a hasty and cowardly retreat back to his chair behind the safety of the awning.

When caught up in the division psyop, people appear to share a common trait — a belief that they are entitled to verbally denigrate, insult and attack anyone who dares to hold a different opinion to theirs. Another common trait I’m observing in these “righteous souls” is COWARDICE.

In the video below, reporter Avi Yemini of Rebel News is covering a protest on Oct. 22nd, attended primarily by nurses and teachers.  He is filming on Spring St., opposite Parliament House in Melbourne’s Central Business District. As he passes a segregated outdoor dining area, a man yells insults at him. As Avi approaches the man to give him a chance to express his views to a wider audience, the man becomes very aggressive and hostile. Of course, those in support of medical tyranny have reported that the irate man is the victim in this situation.

Taking a Stand Against These Crimes Against Humanity

Australians are rising and pushing back in greater numbers every day. There are many examples, including lawsuits, protests and individuals standing up to employers and bureaucrats. Here are just a few examples:

“Senior Constable Belinda Hocroft, who is attached to the Dog and Mounted Police unit, has filed civil proceedings in the Supreme Court of NSW against the health minister seeking a declaration that the government does not have the power to pass orders which essentially coerce people into being vaccinated.” 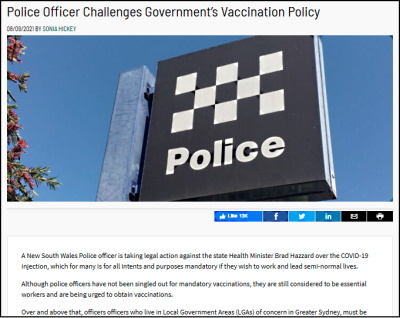 Australia’s ‘Advocate Me’ Pushes Back Against New World Order and Digital ID.

“So if it’s public consultation they want, let’s give it to them. We have under a week to do it, but it is critical we do, because this legislation is a further attempt to remove our sovereignty as they are doing with our bodily autonomy through forced vaccination. Again, it is up to us to say NO!” 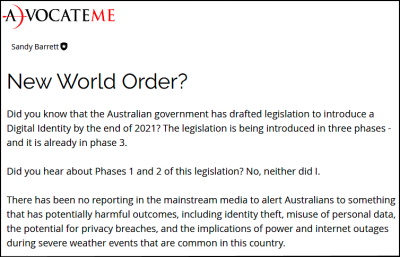 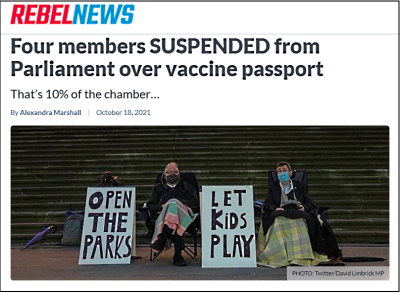 Brisbane rallies against the ‘health tyranny’

“On the 16th of October, thousands marched through the streets of Brisbane in a “stand against tyranny”.

Chants echoed through the streets, bringing the city to a standstill for an hour and a half. This crowd had a lot to say and had one dominant message of ‘freedom’.”

Nelleus is an independent reporter, dedicated to freedom, and committed to revealing the truth about unfolding events in Australia, .

“There is no compromise, we will always stand with you for the truth.”

Nelleus is a contributing writer at Truth Comes to Light.