A year after the start of the Covid crisis, the fault lines of major social conflict are becoming apparent.

On the one side, authorities are ramping up the repression as they seek to push us all permanently into their New Normal of techno-fascist global slavery.

On the other side, as the Great Reset agenda becomes more widely noticed and understood, resistance is growing, albeit largely under the radar of corporate media subservient to the dictatorship.

“Europe is in revolt against lockdown. Protests, riots and civil unrest have broken out across the continent. People are starting to reach breaking point,” says this February 2021 report by Paddy Hannam of Spiked Online.

Dutch people reacted angrily and courageously against a police-state curfew imposed on their country for the first time since it was occupied by the (original) Nazis.

Youths torched a COVID-19 testing center and threw fireworks at police in the fishing village of Urk, reports DW.

“Police in the capital of Amsterdam also used a water cannon to disperse an outlawed anti-lockdown demonstration on a major square ringed by museums,” adds AP.

John Jorritsma, mayor of Eindhoven, where major riots broke out, warned: “We’re on our way to civil war”.

The Dutch love of vrijheid (freedom) was considered worrying by US pro-system propagandist Frida Ghitis, who described how “political extremists, hoping to shake up and undermine the system, blended into the crowd, turning the protests into an explosion of violence”.

In Copenhagen, Denmark, “crowds of black-clad protesters have taken to the streets, launching fireworks, torching an effigy of Prime Minister Mette Frederiksen, and clashing with cops”.

There have also been big protests in Denmark’s second biggest city, Aarhus.

In Brussels, Belgium, hundreds of people defied a police-state ban on protesting, with nearly 500 arrests.

Meanwhile, some 10,000 people marched through the centre of the Austrian capital, Vienna, to protest against “Covid” restrictions and to demand the resignation of Chancellor Sebastian Kurz.

There were reports of police removing their helmets in apparent solidarity with the crowds.

In France, resistance has been focusing on opposing the Macronist regime’s fascistic Global Security legislation, a cause which has mobilised part of the traditional left as well as Covid dissidents.

The brutal way in which protests have been attacked by riot cops has caused widespread outrage and fuelled concerns over the direction in which the country is being taken.

On Saturday February 13 protests continued all across the country (Brest, Strasbourg, Montpellier, Chapelle-en-Vercors…)

There is a call for angry citizens from across France to descend on Versailles, symbol of the pre-revolutionary ruling elite, on Saturday February 27 to demand the restoration of freedom for the people and the end of the Macronist regime.

And in London, UK, the first anniversary of lockdown, on March 20, is set to be greeted with a huge protest in the capital, with a target of 50,000 people in London at a location yet to be announced. 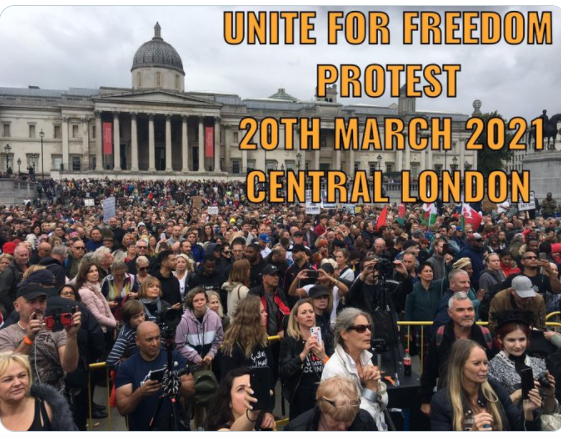 All the time, all across the world, people are standing up to the global tyranny, often on a very local level.

For instance, on Monday February 15 “anti-lockdown protesters clashed with police” at Eaton Mall in the Oakleigh area of Melbourne, Australia.

On the same day, a group of protesters “representing a range of different ethnicities” gathered outside New Zealand Prime Minister Jacinda Ardern’s offices in Auckland to protest against lockdown tyranny.

In Jerusalem, “ultra-Orthodox” Jews have been at the forefront of lockdown resistance.

Reports The Times of Israel: “Some demonstrators blocked traffic, burned trash bins, damaged vehicles and heaved stones and other objects at officers.

“Police used water cannons to disperse the protest and arrested at least one person on suspicion of disturbing public order”.

In Lebanon, people took to the streets of Tripoli, Beirut, and Sidon for several nights to protest against the two-week extension of curfews and lockdown.

In Vancouver, Canada, protesters rallied to demand an end to PCR testing.

When the system’s mouthpieces warn of bad omens and dangers, we know that there is still hope that we can win this great battle for our freedom.

Winter Oak is a not-for-profit organisation dedicated to spreading information and ideas on social, environmental and philosophical issues. Connect with them at https://winteroak.org.uk/