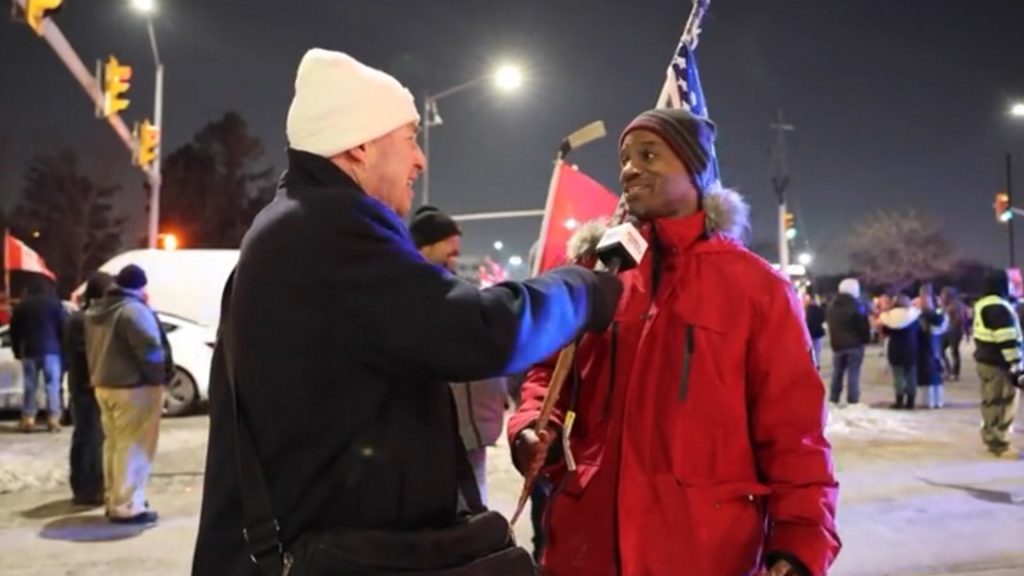 How Long Will This Off-Ramp Blockade Be Tolerated by the Authorities?

As Justin Trudeau and his useful idiots in the mainstream media continue to vilify and demonize the Freedom Convoy truckers and their supporters in Ottawa, the line is being held. Indeed, other trucker demonstrations are now popping up all over our great dominion.

From Toronto and Quebec City to Alberta, truckers have assembled, demanding an end to the myriad useless COVID-19 lockdown mandates that are making all our lives miserable.

On Monday evening, truckers parked their big rigs on the Ambassador Bridge, eventually forcing an entire bridge closure. Several hours later, the trucks moved off the bridge, but some of the 18-wheelers and several cars, pickup trucks and campers blockaded the offramp to Windsor.

That means vehicle traffic coming from Michigan into Ontario is currently completely shut down (the bridge is still open to traffic going from Ontario to Michigan.)

When we arrived at the Windsor side of the Ambassador Bridge on Tuesday evening, we were greeted by a downright surreal site: a multi-lane stretch of asphalt that is normally extremely busy with truck and car traffic had become a place where demonstrators were protesting and dancing the night away. While it was a festive atmosphere on the Canadian side, an Ambassador Bridge employee told us that traffic on the Michigan side was backed up by some 20 miles.

Alas, the question arises: how long will this ramp blockade be tolerated by the authorities?

After all, the Ambassador Bridge is the most important conduit between Canada and the U.S. More than 40,000 vehicles and more than $300 million in goods cross this bridge on a daily basis.

Indeed, rumours abound that a major police operation is imminent, with the goal of dismantling the blockade.

The Windsor Police Service has already reached out to the RCMP for reinforcements.

Granted, the blockade is a major inconvenience when it comes to Canada-bound traffic from the U.S. (those hoping to make the crossing are being advised to go to the Blue Water Bridge near Sarnia) but despite the narrative being manufactured by the Trudeau Liberals and their bought-and paid-for henchmen toiling in the mainstream media, the Freedom Convoy protesters are not racists, bigots and haters.

Rather, they are peaceful protesters — patriotic Canadians who simply want their freedoms restored. Imagine that.