The government-media-pharma gang is lying, and they will never stop lying to cancer patients specifically and the rest of us in general. Do a Google search on Cancer and COVID vaccines, and you will see the number of organizations all saying the same thing.

As far as the eye can see, we have pronouncements that COVID vaccines for cancer patients are safe, even though we know they are not. They are not safe for adults, children, and especially not for cancer patients who need the most healthy immune system possible. Always remember Vitamin D  is the key to immune health not genetic vaccines.

It has been shown that in up to 50% of vaccinees, COVID vaccines can induce a temporary immune suppression or immune dysregulation (lymphocytopenia) that may last about a week or possibly longer. Not good for cancer patients.

In addition, COVID mRNA vaccines have been shown to “reprogram” (i.e., influence) adaptive and innate immune responses and, in particular, to downregulate the so-called TLR4 pathway, which is known to play an essential role in the immune response to infections and cancer cells. More bad news for cancer patients but don’t mention this to your doctor, for they will play stupid and try to sell you on the idea of getting vaccinated.

“My daughter has a close friend who got colon cancer several years ago, supposedly in remission since then. She got doubled vaxxed back in April or May, and then a booster in Sept. In October, her cancer was back with a vengeance and spreading to other places. She is currently on chemo but not doing well.”

Is it best to talk with your doctor before getting any vaccine? No, almost all doctors who want to keep their licenses to practice medicine will favor you getting your COVID shots no matter what your cancer status is.

Dr. Brett Parkinson (MD of Intermountain Healthcare’s Breast Care Centre) said, “When one receives a vaccination, there is an inflammatory response in the arm.” As a result, doctors have observed swollen lymph nodes on screening mammograms of recently vaccinated women for COVID-19. “Whenever we see these on a normal screening mammogram, we call those patients back because it can either mean metastatic breast cancer which travels to the lymph nodes or lymphoma or leukemia.”

In a video produced by the Idaho state government in March, Dr. Ryan Cole, who runs the largest independent testing laboratory in Idaho, said that since the rollout of the vaccines, he had seen a staggering increase in cancers among those who have received the abortion-tainted jabs.

“Since January 1, in the laboratory, I’m seeing a 20-times increase of endometrial cancers over what I see on an annual basis,” reported Cole in the video clip. “I’m not exaggerating at all because I look at my numbers year over year, I’m like ‘Gosh, I’ve never seen this many endometrial cancers before.’” Listen to Dr. Cole here.

Cole explained that the COVID-19 vaccines seem to impact the immune system function responsible for combatting the growth of cancer cells and other viruses, referring to the phenomenon as a “reverse HIV response.”

Cole explained that the vaccines cause suppression of a person’s “killer T-cells,” similar to how HIV suppresses a person’s “helper T-cells” and how both types of cells are integral to fighting off cancer cells and other damaging viruses.

In addition to endometrial cancer, Cole reported an “uptick” in melanomas, herpes, shingles, mono, and a “huge uptick” in HPV, which he attributes to the damage done to the immune system by the experimental shots.

Of course, every doctor who has anything different to say than the public narrative that COVID vaccines are safer than mom’s apple pie is censored, and it’s no different with Dr. Cole, who is an official member of Idaho’s public health board. The government-media-pharma gang is not interested in listening to the many professionals speaking out and is ignoring the adverse drug reaction systems completely.

The Profile of Safe COVID Vaccines 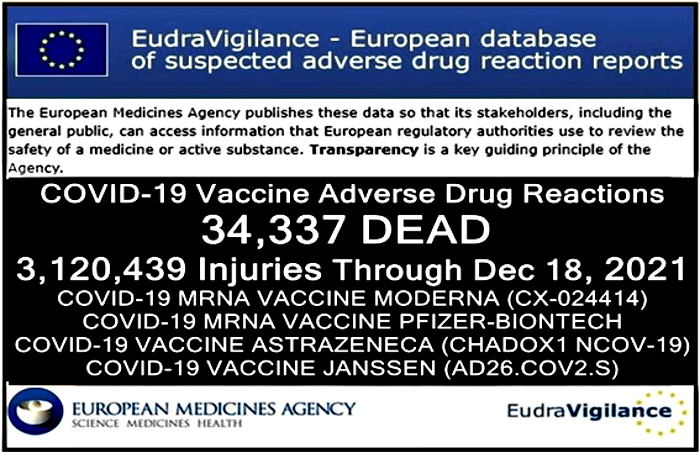 Fifty percent of the more than 3 million injuries are reported to be serious. In the United States, the official number in the VAERS vaccine reporting system is 20,622 deaths. The FDA, the CDC, and the president of the United States, present and former, are potent magicians and can reduce these numbers to zero.

Of 1,200 patients and survivors surveyed by the American Cancer Society in the first two weeks of May, 87% said the pandemic has affected their health care. That’s compared to 51% in April.

There are many ways the over-reaction of health officials is hurting cancer patients. One of the most potent cancer-fighting weapons is exercise. Several studies have shown that physical activity is linked with decreased risk of some cancers, particularly breast and colon cancer. People who followed healthy lifestyle habits, including exercising for more than 30 minutes daily, lowered their risk of colorectal cancer, according to a study published online in October in the British Medical Journal.

Modern Medicine Has Forgotten About Light

Keeping people indoors instead of exercising and being out in the sun is not a good idea for cancer patients. I bet world health officials did not consider that a lack of sunlight can also cause cancer. Vitamin D deficiencies (lack of light) can lead to the development of prostate and breast cancer, memory loss, and an increased risk for developing dementia and schizophrenia. The surest way to die of COVID is to be vitamin D deficient. We could say the same for cancer.

“It seems clear that light is the most important environmental input, after food, in controlling bodily function,” reported Dr. Richard J. Wurtman, a nutritionist at the Massachusetts Institute of Technology. “Sometimes I get the impression my dermatologist colleagues would be happiest if we lived in caves,” continues Wurtman, who recommends daily 20-minute walks at noon to get the Sunlight we need.

“Cancer is helped by sunbathing. Those who get more sunlight have less cancer. Sunbathing heals cancer by building up the immune system and increasing the oxygen in the tissues. Sunlight does not cause skin cancer unless one suffers through chronic sunburn,” writes Dr. Zane R. Kime, author of Sunlight Could Save Your Life.

Dr. Mark Sircus, Ac., OMD, DM (P) (acupuncturist, doctor of oriental and pastoral medicine) is a prolific writer and author of  medical and health-related books. Dr. Sircus’s methods are based on medical science and long years of clinical experience, not only his own but experiences of doctors from around the world who have been practicing brilliant medicine.

His books are heavily referenced, but the layperson finds little difficulty in understanding his presentation of medical topics. For many years Dr. Sircus has been researching into the human condition and into the causes of disease; he has distilled many of the divergent medical systems into a new form of medicine that he has coined Natural Allopathic Medicine.