China Sees… Well… “Something” on the Moon

Home / Inspiration & Insight / China Sees… Well… “Something” on the Moon

CHINA SEES…WELL… “SOMETHING” ON THE MOON

Once upon a time there was a big country of lots of talented and brilliant, but very oppressed, people called China.

The people doing the oppressing came from a very long and ancient tradition of oppressors, but then they decided to become more modern and up-to-date, and they quit calling themselves war lords and emperors, and decided to call themselves things like “central committee” and “politburo” and “communists” and “general secretaries.” But they didn’t quite shed the oppressor image, because their paper money still had pictures of The Great Oppressor, a loathsome and murderous man by the name of Mao-Tse-Dung (emphasis on the dung), whose picture also hangs in the World Villains Hall of Fame along with a bunch of other folks by the name of Castro, Pol Pot, Hitler, Stalin, and so on.

Nevertheless, to show the world how modern and up-to-date they were, they decided to import and steal a lot of foreign technology and food so their people wouldn’t have to eat things like bats, but could eat things like GMOs instead. While all of this was going on, the oppressors decided to make everyone feel better and good about themselves, so they decided to have a space program. Using their bought, borrowed, and stolen technology, they managed to stun the world with a feat of space engineering and operational complexity: that of sending a landing robotic probe to the Far Side of the Moon.

But then, Something Happened, because the Oppressors crawled into bed with Harvard chemists and the world’s top computer man who designed the world’s worst operating system, who just happened to be experts in nano-technology and vaccines, and who wanted to vaccinate everyone. Well, you won’t believe what happened next! The Oppressors decided to open a big laboratory in one of China’s biggest cities, called Wuhan, where the Harvard professor occasionally worked. And then someone ate some bat stew or soup or something, and came down with a virus that the local laboratory just happened to be researching, and all sorts of people suddenly became sick and it spread all around the world, and became a plandemic the likes of which Dr. Anthony Fauci and the computer expert who designed the world’s worst operating system could only have dreamed of, while many people outside of China wondered about the irony that the computer guy, whose operating system was easily riddled with viruses, was presuming to speak out about how to protect people from viruses.

Meanwhile, many doctors inside of China who weren’t part of the oppressors heroically risked their lives to warn everyone about what was happening, but they disappeared for some reason, and then were never heard from again, while doctors elsewhere were challenging the numbers behind the Fauci crisis, and were being ignored by what was called the Propatainment “media”.

While all of this was going on, T.M. spotted an article in an American newspaper and passed it along, that indicated that the robotic probe the Oppressors had sent to the far side of the Moon had spotted something back in September 2019, just as the Fauci crisis was getting underway, that was just a little problematical and “sticky”:

What the article said was truly astonishing, and momentarily made everyone forget the Fauci crisis:

Earlier this month, the Chinese space agency revealed that the Yutu-2 rover it sent to the far side of the moon months back found something it didn’t expect. The rover’s handlers spotted something strange in a crater just as the rover was preparing to power down for the lunar night.

It was a strange, glossy substance that Chinese researchers said had a “gel-like” appearance. Nobody can say for certain what it is, but early theories suggested it may be lunar glass created by whatever impact created the crater itself. Now, China has released some additional images of the crater and the material inside, but the mystery is no closer to being solved.

But what was really unusual and had everyone – including the oppressors – scratching their heads, was that there was a picture which went along with the article: 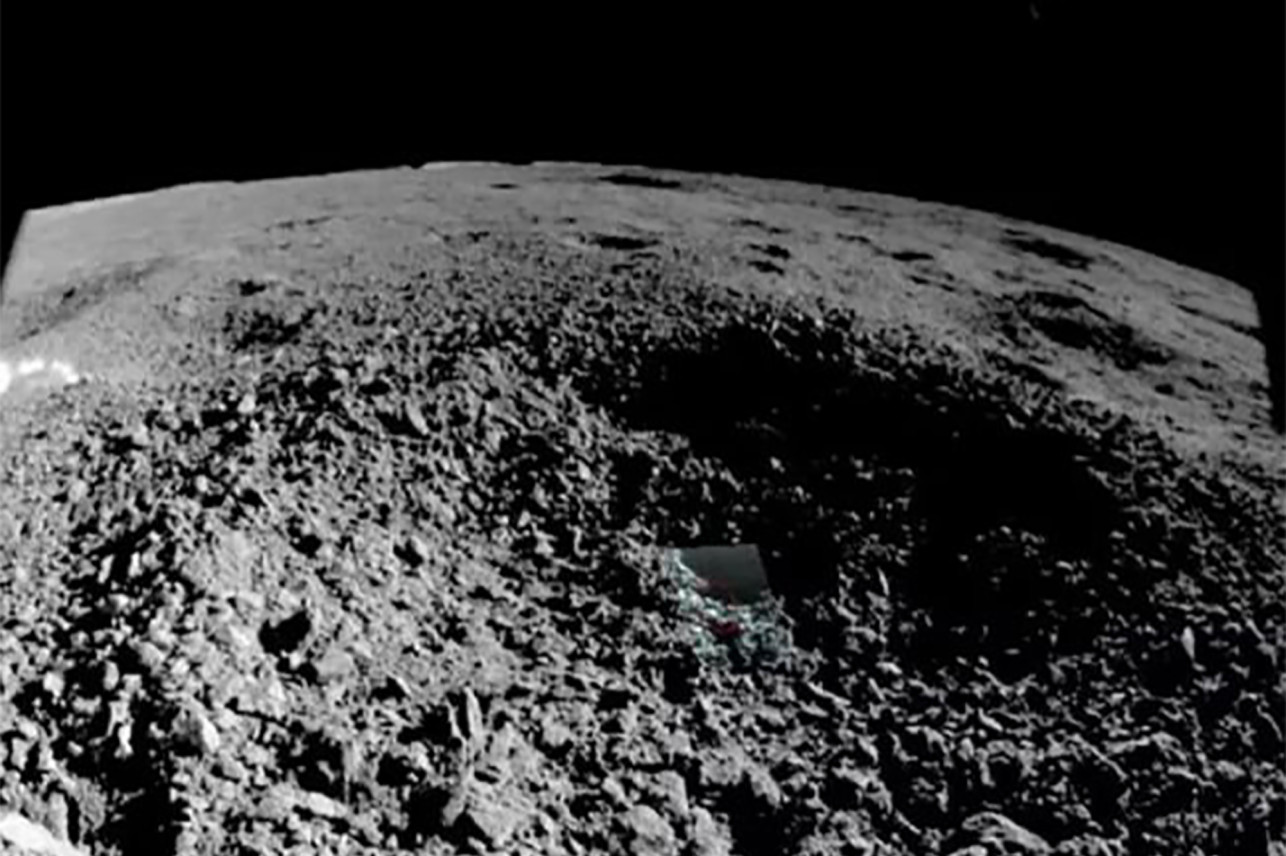 And there in almost the center of the picture was the sticky problem, an almost perfectly rectilinear feature that was presumably the glassy or gel-like substance, that had everyone snickering and chuckling at the explanation being offered, that it was the result of the rover’s scanning tools, or a glassy substance created by an impact.

But the Oppressors felt good about that explanation, because they had finally caught up with their chief rival, a strange agency well-known for its fabrications, obfuscations, and explanations that made no sense, called NASA, which had once called a Face a Trick of Light and Shadow. But after NASA took some pictures of a moon of Saturn called Iapetus, with three parallel ridges on its equator, and which looked uncomfortably like objects called the Death Star from the movies, no one was buying that explanation either. But everyone quit questioning narratives when the Propatainment Ministry came along, and sponsored a new TV show called “Corona Virus, starring Dr. Anthony Fauci,” and everyone stayed home, wore masks, and was entertained by the doctor and his amazing feats of sleight of hand with numbers.