A primary objective of ongoing geoengineering operations is to mask the true severity of climate collapse from potentially powerful populations who could oppose climate engineering if awakened to the reality. The majority of the US population is in the eastern half of the country. By consistently engineering cool-down zones over the same heavily populated regions, the power structure and the climate engineers are able to further fuel division and confusion in regard to the actual state of global temperatures. The GISS departure from normal high temperature map below is the most recent case in point. Where was the only anomalously cool region in the world for the entire month of April? The eastern half of the North American continent. This anomaly was not an act of nature, it is a direct result of massive climate intervention operations. For the record, though April, 2018, was the 400th consecutive month of above normal global temperatures (3rd warmest April ever recorded globally), the US was miraculously below normal temperatures with the coldest April in more than 20 years. 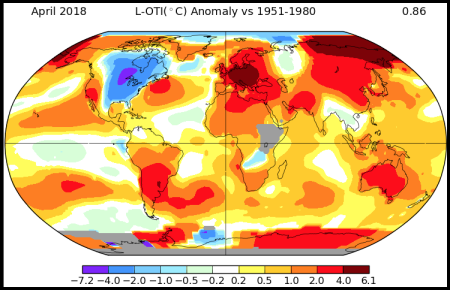 For the entire month of April, 2018, the bullseye of below normal temperatures was maintained over the most populated regions of the US. It is important to remember and consider that the eastern half of the US is only 1/200th of the Earth’s surface area (1/2 of a percent). Conditions in such a small percentage of the Earth’s surface, of course, do not provide an accurate picture of overall planetary temperatures and conditions.

Global departure from normal high temperature anomalies have remained similar for an extremely long span of time as next GISS map reveals (April, 2017, through April, 2018). Again, as already stated, such anomalies are not an act of nature, they are the result of climate engineering operations. The country with largest military by far (The US military is larger than the next 10 largest militaries combined) is the most capable of carrying out unimaginably extensive climate engineering operations. It must be remembered and considered that the materials utilized in these operations are highly toxic. 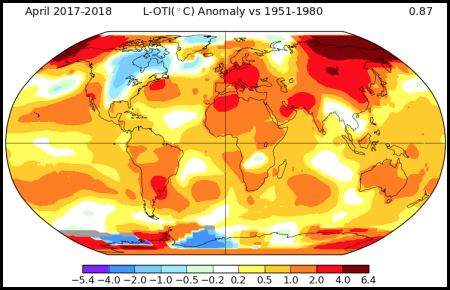 For an entire year (April, 2017, through April, 2018) below normal temperatures were maintained over the eastern half of the North American continent.

Climate engineering can and is creating short term highly toxic cool-downs at the cost of a worsened overall planetary warming. GeoengineeringWatch.org has repeatedly documented the ongoing engineered winter / engineered cool-down component of climate engineering. The article links below should be reviewed and considered by any that truly want to comprehend the totality of impact geoengineering operations are having on regional temperatures and thus public perception. Sharing credible and referenced information is essential in the fight to expose and halt climate engineering, all of us are needed to help sound the alarm.