COVID-19: The Spearpoint for Rolling Out a “New Era” of High-Risk, Genetically Engineered Vaccines

COVID-19: The Spearpoint for Rolling Out a “New Era” of High-Risk, Genetically Engineered Vaccines 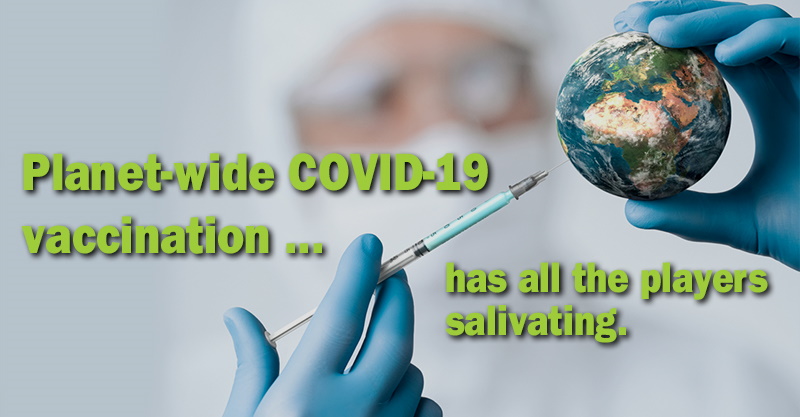 [Note: This article represents Part I of a two-part series examining COVID-19 vaccine technologies and their implications.]

For weeks, talking heads have been promoting the liability-free vaccine(s) that will save the world—so Bill Gates and Tony Fauci proclaim—from what Gates has now dubbed “Pandemic I.” As Microsoft News peddles self-congratulatory stories about the Gates Foundation’s reorientation of its priorities to devote “‘total attention’ to the pandemic,” Fauci—making the rounds of talk shows—pledges that a vaccine will make its debut in January 2021. Not to be outdone, the White House has now unveiled “Operation Warp Speed”—a joint pharmaceutical-government-military effort aimed at “substantially shrinking the development time for a vaccine”—and President Trump promises one by the end of the year.

Planet-wide COVID-19 vaccination—the overt objective that has all of these players salivating in anticipation—ignores a number of irrefutable obstacles. For one, the RNA virus being targeted, SARS-CoV-2, already “has mutated into at least 30 different genetic variants.” The variants include 19 never seen before as well as “rare changes that scientists had never imagined could happen.” Knowledge about these mutations may prove useful to clinicians wanting to better tailor their COVID-19 treatments, but the proliferation of mutations makes the chances of developing an effective vaccine immensely more uncertain.

Not to worry, say the entities funded by Gates (and also the Pentagon). Scientists working in the burgeoning field of synthetic biology are confident that they can “outdo” and outsmart nature using next-generation vaccine technologies such as gene transfer and self-assembling nanoparticles—along with invasive new vaccine delivery and record-keeping mechanisms such as smartphone-readable quantum dot tattoos. Does it matter that the researchers who have been experimenting with these approaches have never been able to overcome “nasty side effects”? Apparently not. Aided and abetted by the generous Gates and military funding, high-fanfare COVID-19 vaccine planning is proceeding apace.

Researchers reiterated this point …  that for most emerging virus vaccines, the main obstacle is not the effectiveness of conventional approaches but the need for more rapid development and large-scale deployment.

From a manufacturing standpoint, vaccine makers—and particularly those making viral vaccines—have long chafed at the limitations of traditional vaccine technologies, which rely on processes that necessarily entail “a considerable lag time between antigen production and vaccine delivery.” Researchers reiterated this point again in 2018, writing in Nature Reviews Drug Discovery that “for most emerging virus vaccines, the main obstacle is not the effectiveness of conventional approaches but the need for more rapid development and large-scale deployment.”

In the 1980s, manufacturers were elated when scientists developed new genetic engineering techniques (recombinant DNA technology) that—through the use of “expression systems” (bacteria, yeast, insect cells, mammalian cells or plants such as tobacco)—made it possible to jumpstart vaccine production and produce so-called “subunit vaccines.” The hepatitis B vaccine was the first to employ this “entirely new” vaccine production approach, and a number of the COVID-19 vaccines currently in the works are deploying these techniques. However, a complicating factor of subunit vaccines is that they must be bundled with “immunopotentiating” adjuvants that tend to trigger an imbalanced immune response.

Desirous of streamlining vaccine technology still further and enabling vaccine stockpiles in an even shorter time frame, researchers began tinkering in the mid-1990s with nucleic acid vaccines, which include DNA vaccines and messenger RNA (mRNA) vaccines. As a form of gene therapy, both represent a significant departure from classical vaccines. Whereas the latter introduce a vaccine antigen to produce an immune response, nucleic acid vaccines instead send the body instructions to produce the antigen itself. As one researcher explains, the nucleic acids “cause the cells to make pieces of the virus,” with the goal being that the immune system then “mounts a response to those pieces of the virus.”

Researchers quickly learned that both the DNA and mRNA vaccine options have serious downsides, and as a result, vaccines of this type have never been licensed. Nonetheless, almost one-fourth (20/83) of the vaccines listed by the World Health Organization as COVID-19 “candidate vaccines” as of April 23—including two of the leading contenders—are DNA (Inovio) or mRNA (Moderna) vaccines (see table).

DNA vaccines, by definition, come with the risk of integration of exogenous DNA into the host genome, which may cause severe mutagenesis and induced new diseases.

DNA vaccines are intended to penetrate all the way into a cell’s nucleus. According to one biotech scientist, “This is an incredibly difficult task given that our nuclei have evolved to prevent any foreign DNA from entering (Think viruses!).” Not surprisingly, then, when some DNA vaccines made it into clinical trials in the late 2000s, they were plagued by “suboptimal potency.” Scientists then came up with the idea of solving this problem by augmenting vaccine delivery with “electroporation”—electric shocks applied to the vaccine site (using a “smart device”) to make cell membranes more permeable and force the DNA into the cells. The improvements in vaccine efficacy were significant enough that electroporation remains a key design feature of some COVID-19 vaccine candidates today, including the Moderna vaccine that is now speeding toward Phase 2 clinical trials.

A second aspect of DNA vaccines—their gene-altering properties—is even more troubling and remains unresolved. DNA vaccines, by definition, come with the risk of “integration of exogenous DNA into the host genome, which may cause severe mutagenesis and induced new diseases.” Framed in more understandable terms, “disruption from DNA is like inserting a foreign ingredient in an existing recipe, which can change the resulting dish.” The permanent incorporation of synthetic genes into the recipient’s DNA essentially produces a genetically modified human being, with unknown long-term effects. Speaking of DNA gene therapy, one researcher has stated, “Genetic integrations using viral gene therapies . . . can have a devastating effect if the integration was placed in the wrong spot in [the] genome.” Discussing DNA vaccines specifically, the Harvard College Global Health Review elaborates:

Potential side effects could include chronic inflammation, because the vaccine continuously stimulates the immune system to produce antibodies. Other concerns include the possible integration of plasmid DNA into the body’s host genome, resulting in mutations, problems with DNA replication, triggering of autoimmune responses, and activation of cancer-causing genes.

Because mRNA vaccines are “particularly suited to speedy development,” it is perhaps unsurprising that they are attracting attention as the “coronavirus frontrunners.” mRNA vaccines can reportedly generate savings of “months or years to standardize and ramp up . . . mass production.” Making lemonade out of lemons, insiders casually state that “while no mRNA vaccine has ever been licensed, the threat of a pandemic is a great incentive to accelerate their progress.”

Companies are enamored of the mRNA approach despite observations that the large mRNA molecules are “intrinsically unstable,” “prone to degradation” and may overactivate the immune system. On the plus side, from vaccine scientists’ standpoint, mRNA vaccines need only reach the cell cytoplasm rather than the nucleus—an apparently “simpler technical challenge”—although the approach still demands “delivery technologies that can ensure stabilization of mRNA under physiological conditions.” Formulations such as Moderna’s mRNA-1273 vaccine tackle these challenges by using “chemical modifications to stabilize the mRNA” and liquid nanoparticles to “package it into an injectable form.”

mRNA approaches seem to attract researchers with a highly mechanistic view of human beings. One such individual praises mRNA for its “inherent ‘programmability,” stating “Much like [a] computer [operating system], mRNA therapy can reprogram [one’s] body to produce its own therapies” [emphasis in original]. The CEO of Moderna describes mRNA approaches—which use “custom-built” strands of mRNA to “turn the body’s cells into ad hoc drug factories”—as being “like software: You can just turn the crank and get a lot of products going into development.” Likewise, the journal Nature (commenting on mRNA technology from “a biotech and industrial perspective”) enthuses that the approach “allows rapid refinement with almost limitless combinations of derivatives.”

Vaccine researchers familiar with both DNA and mRNA vaccines like to play up mRNA vaccine safety, citing the fact that the vaccines do not have to penetrate the cell nucleus. However, with years of mRNA vaccine experimentation behind them, none of these researchers has yet achieved licensure. Why? One answer may be that in preclinical studies, mRNA vaccines have displayed an “intrinsic” inflammatory component that makes it difficult to establish an “acceptable risk/benefit profile.” mRNA enthusiasts admit that there is, as yet, an inadequate understanding of the inflammation and autoimmune reactions that may result. This raises many questions about what will happen if regulators grant the manufacturers of COVID-19 mRNA vaccines their wish for “a fast-track process to get mRNA vaccines to people sooner.”

The hijacking of nearly all economic, social, artistic and religious activity by SARS-CoV-2 is disturbing on many levels, not least because of what it reveals about the public’s uncritical acceptance of official spin and its yearning for medical silver bullets. As a vaccine researcher at Sweden’s Karolinska Institute has stated:

When China quarantined an entire megacity in January, People said “only China can do that.” Then we saw similarly drastic measures in several democratic countries. I think it says something about our trust in medical solutions. Today, we expect to be able to develop medicines and vaccines against different diseases in a way we didn’t in the past.

The rush to develop gene-tampering COVID-19 vaccines is also accelerating the conjoined-twins fusion of pharma and biotech. The lucrative biopharma sector is now the fastest-growing segment of the global drug industry, currently representing 20% of the worldwide market and displaying an annual growth rate that is more than double that of conventional pharma. And COVID-19 vaccines are helping rescue some biopharma companies’ shaky bottom lines. In 2017, for example, Moderna was struggling to “keep afloat its brash promise to reinvent medicine” after an experimental therapy that it was counting on proved too unsafe to test in humans. Fast forward to 2020, when “bad news about the coronavirus is good news for Moderna stock.” Other biopharma companies formerly on the skids are likewise poised to make record profits from COVID-19.

As biopharma pursues its unfettered, medical-ethics-be-damned race toward a COVID-19 pot of gold, the public needs to take a critical look at the industry’s disincentives for safety and also take a firm stand against the horrifying prospect of coronavirus vaccine mandates. Otherwise, genetically engineered COVID-19 vaccines are likely to start permanently altering genes, triggering autoimmunity and serving as the catalyst for other vaccine injuries or deaths, and—unhampered by any legal liability—none of the commercial or government actors responsible will likely care. 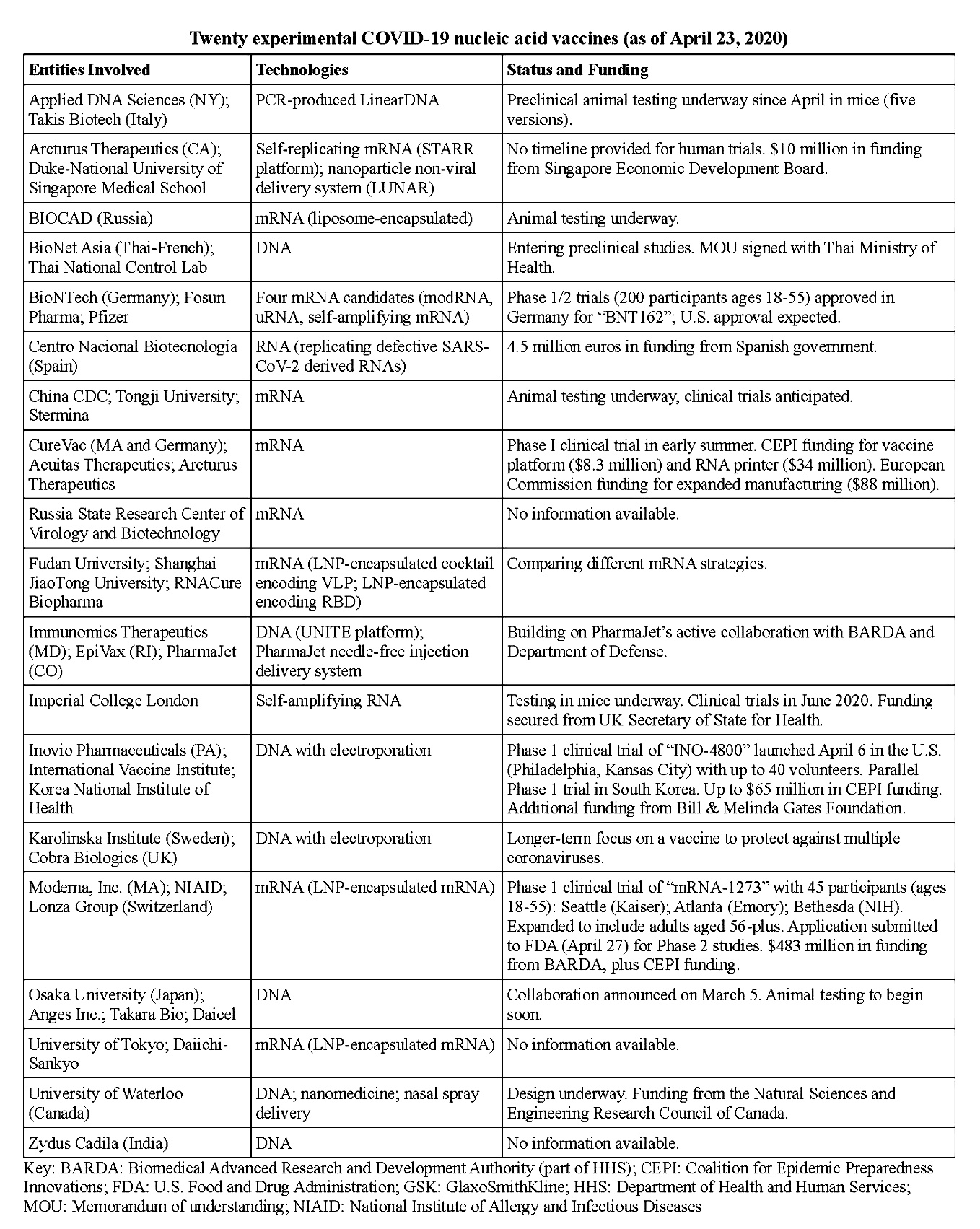