Demos in Parliament Square – Photos, Videos and Speeches in Support of a Real “Freedom Day”

Demos in Parliament Square – Photos, Videos and Speeches in Support of a Real “Freedom Day”

Thousands gathered in scorching heat in Parliament Square on Monday 19th July to demand the ending of all lockdown restrictions in the UK on the day that the British government had promised to be Freedom Day.

The restrictions have not been lifted completely, and indeed in his speech on Freedom Day, Boris Johnson linked the opening of some leisure facilities to vaccine status. He even said:

“We reserve the right to mandate certification at any point, if it is necessary to reduce transmission”.

Those in the anti-lockdown resistance communities have lost all faith in the government led by Boris Johnson.

People were gathering in Parliament Square from 9am, taking over the green, the pavements and the adjacent roads, but the biggest numbers arrived at midday. As before, an ever-growing variety of placards, t-shirts, banners and leaflets reflects the passion and sincerity with which people communicate their frustration. And as in the previous protests people often strike up conversation by commenting and appreciating each other’s slogans and t-shirts. There were many people with megaphones making local ad-hoc speeches. 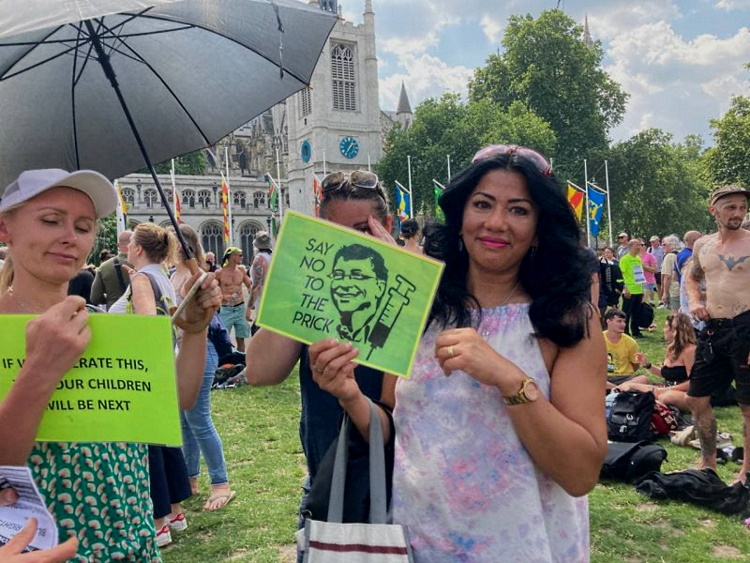 This kind of heat is unusual in London and protesters had to endure temperatures of over 30C and much higher in the full sun. The only respite was at the north end of the square which offered some shade from the canopy of the trees. There, by the statute of Mahatma Gandhi, Piers Corbyn gave a speech whilst other people were congregating nearer the Houses of Parliament.

The main address came from Mark Sexton, a retired Police Constable well known in the resistance communities for his recently circulating video recordings in which he is seen serving evidence of crimes committed by the UK government delivered to his local police station. Mark Sexton’s speech, lasting about 20 minutes, was delivered next to the Houses of Parliament protected by a row of policemen on duty.

Sexton revealed that the Covid pandemic, based on the inappropriate use of PCR tests, was fraudulent, and called upon the police present to enter Parliament and arrest Boris Johnson, Matt Hancock, Nadhim Zahawi, Priti Patel, Patrick Vallance, Chris Whitty and Michael Gove. He said:

He then went on to detail the charges:

“The crimes that these people are responsible for committing unabated since March 2020 […] against you and me are: misfeasance in public office, misconduct in public office, murder, genocide, terrorism, crimes against humanity, fraud, conspiracy to commit murder, torture, false imprisonment, administering a noxious substance or poison with intent to cause harm of death , multiple breaches of the human rights act, child abuse, kidnapping, blackmail, theft, attempted murder, corporate manslaughter, and conspiracy to commit all of the above.”

Sexton then went on to say that the pandemic regulations and the introduction of the vaccines are not about public health but about ‘controlling us and we will not let that happen. The vaccine programme is a disaster and must be stopped’.

He also said that the double standards shown by the powerful who continue to travel without quarantine which ordinary people are denied shows that “Covid is of no concern to the rich and powerful.” Sexton also addressed the police, reminding them that they had all sworn an oath to protect the public from injury or loss and that they have failed us. He repeated his call to the police to act on the knowledge of the committed crimes – which was echoed by the crowds chanting to the police: ‘do you job, do your job!” 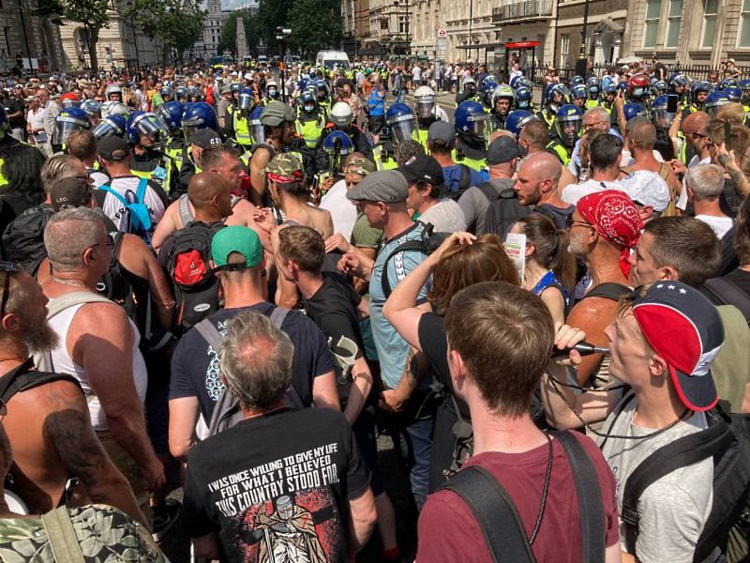 Finally, Mark Sexton turned to the protestors and informed them that it is within the law for them, the people, to arrest those who commit crime. His speech was finished by calling the people to realise their right and powers.

He said that as the people we are the higher authority and we would not accept the curtailment of our God-given rights. He said that all government buildings, all state property, all court buildings are owned by the people. “We own it!” he said.

Finally, he called on the people present to use their right and vote in 12 new laws there and then. These laws were all to be voted in by those present by shouting either YES, YES, YES, or NO, NO, NO. “Today we will vote in our own laws. They come from the people and are voted in by the people”:

After Max Sexton, Kate Shemirani, recently struck off from the register of the Nursing and Midwifery Council for ‘promoting conspiracy theories and claiming Covid 19 is a hoax’ and who calls herself a natural nurse in a toxic world, delivered a passionate speech about medical abuses committed against children in care, the elderly and those in care homes.

The atmosphere during the Freedom Day protest was much more serious and tense than in recent protests.

Although there was some music and the place was buzzing with authentic, engaged conversations, there seemed less joy and optimism. Many people left after the afternoon speeches, around 3pm, yet people continued to arrive. Some stayed sitting on the grass and near the statues for much of the day.

More speeches were delivered near the Churchill statue. A woman talked about her experiences of child trafficking and ritual abuse. These protest encounters are more and more about getting to the core of what is broken in the West: the corruption of the elites, the powerful and many important public institutions.

Today, the people met in the square, took over the public space, the modern-day Agora and spent a hot London day, much like Athenians did in ancient Greece, putting their polis to right. It was an exercise in democracy. The intent of the assembly was peaceful and assertive.

Yet, predictably the power pushed back.

Although in the afternoon a video emerged showing some policemen taking off their helmets in front of a group of protestors, later on scenes of a handful of violent encounters, with some police provoking the people, showed a few brutal arrests, followed by scuffles with some angry protestors.

This will no doubt be the only news of the day in mainstream media.

This is not the end.

Video is available to view directly at OffGuardian Odysee channel.