This interview with Tamir Turgal took place on January 22, 2021 in Berlin, Germany as part of Corona Investigative Committee Session #36.

Tarmir Turgal is an Israeli attorney, specializing in medical law, and also an IT (“high technology”) business man.

[As a service to protect truth from censorship and to share widely, mirrored copies of this video are available at Truth Comes to Light BitChute, Brighteon, Lbry/Odysee channels. All credit, along with our sincere thanks, goes to the original source of this video. Please follow links provided to support their work.]

Excerpts from the interview:

This is about how we are lacking moral competence. And that is the basic problem why so many people are getting fooled. Because they haven’t learned over the last 20 or 30 years — they haven’t learned to use their brains, to think about things and to discuss matters. It’s easier for some of us to not discuss problematic situations, but just pull out a gun and shoot.

As we have learned yesterday, a lot of people in Israel are — or that is the appearance that the mainstream media give — are not critical, but rather obedient, as far as the vaccines are concerned.

Unfortunately it seems that history is repeating itself time and again. And we can see lack of education but also using a very vicious tactics to pull people to wherever the regime or the so-called governments wants to take…

Now what we see is that there is something going on for a long time. So as long as time is passing, people — more people and more people — are waking up. Because you cannot fool all of them…

We’ll go back to the question about the media — mainstream or so-called . This is not a media — this is a propaganda channel…

Obviously, there is an agenda. And that agenda is being pushed over the population — and, unfortunately, with a lot of success in the state of Israel.

It’s kind of, I would say ‘symbolic’ that I’m here in Germany getting help of people like you guys — and all over the world — that are saying a different… giving different information and having a different conversation…

I represent many people in Israel right now that feel that the country, in terms of consciousness, has been hijacked. And that people are being full and maneuvered to believe that we are — they are –leading the world.

Now the irony is that you’re an Israeli. This country is the country that is responsible for six million people’s deaths. And the irony is that you’re here now and we’re talking about how we are worried — us here are worried — that something very similar to what happened back then is happening again in your country with your people. With a lot of people being completely unaware of the dangers of these vaccinations.

The thing is, why is it that Israel got — obviously got — the first truckloads of vaccines when the rest of the world was still hoping that they would get it? Why is that?…

The push into Israel may have something to do with the fact that Pfizer has access to long-term medical records of people in Israel. Have you heard about this?

Of course, of course. We know for sure that the government agreed that they will send the data…

I’m saying.. it makes me very sad that my country represents now how a society can be hijacked by bad guys. 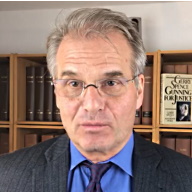 Dr. Reiner Fuellmich is a consumer protection trial lawyer in Germany and California. He is one of four members of the German Corona Investigative Committee who are now working with an international network of lawyers who will argue this biggest tort case ever, the Corona Fraud Scandal, which has meanwhile unfolded into probably the greatest crime against humanity ever.