Dr. Tom Cowan: Challenging the COVID-19 Narrative — A Call for Debate About the Myth of Contagious Disease

Dr. Tom Cowan: Challenging the COVID-19 Narrative — A Call for Debate About the Myth of Contagious Disease

The Book Born of the Biggest Intellectual Challenge of My Life

We are living in an unprecedented and perilous time in history. Never before that I know of has the full fury and power of “science”, “medicine” and technology been unleashed to control the lives of so many people.

As many of you know, I have somewhat reluctantly been thrust into a role of examining the facts behind the “science” and “medicine” surrounding the COVID-19 crisis. This examination has been the intellectual challenge of my life.

Although I don’t pretend I have all the answers or the full truth, I do believe I have something important to contribute.

It is in that spirit of contribution that some months ago my dear friend and colleague Sally Fallon Morell and I decided to write a book detailing the history of the real science of contagious disease, including COVID-19. It will be published September 15.

What we found might be shocking and even hard to fathom for many, but I can assure you that our findings are based on meticulous research, not the dogma of germ theory.

We want the information in this book to become part of an open, honest, public debate, an integral part of the serious and scientific dialogue.

To that end, we are asking everyone we know to purchase a copy of our book, The Contagion Myth.

Read it yourself, read it again, send me your feedback, comments and questions. Give a copy to your friends, family members, health-care providers and government officials.

I will continue to speak out, but I need your help.

We are at a turning point in history. Like the mythical Phoenix, we can rise up and create a more beautiful world, one based in trust, compassion, mutual aid and a profound connection to the needs of all life.

But, this more beautiful future will be born only from an intentional and collective effort to see and think clearly and to act with confidence and courage.

[**September 26, 2020 Update: The Contagion Myth has been banned on Amazon. It is available at Barnes & Noble, Books-a-Million & Target]

The official explanation for today’s COVID-19 pandemic is a “dangerous, infectious virus.”

This is the rationale for isolating a large portion of the world’s population in their homes so as to curb its spread.  From face masks to social distancing, from antivirals to vaccines, these measures are predicated on the assumption that tiny viruses can cause serious illness and that such illness is transmissible person-to-person.

It was Louis Pasteur who convinced a skeptical medical community that contagious germs cause disease; his “germ theory” now serves as the official explanation for most illness. However, in his private diaries he states unequivocally that in his entire career he was not once able to transfer disease with a pure culture of bacteria (he obviously wasn’t able to purify viruses at that time). He admitted that the whole effort to prove contagion was a failure, leading to his famous death bed confession that “the germ is nothing, the terrain is everything.”

While the incidence and death statistics for COVID-19 may not be reliable, there is no question that many people have taken sick with a strange new disease—with odd symptoms like gasping for air and “fizzing” feelings—and hundreds of thousands have died. Many suspect that the cause is not viral but a kind of pollution unique to the modern age—electromagnetic pollution.

Today we are surrounded by a jangle of overlapping and jarring frequencies—from power lines to the fridge to the cell phone. It started with the telegraph and progressed to worldwide electricity, then radar, then satellites that disrupt the ionosphere, then ubiquitous Wi-Fi. The most recent addition to this disturbing racket is fifth generation wireless—5G.

In The Contagion Myth: Why Viruses (including Coronavirus) are Not the Cause of Disease, bestselling authors Thomas S. Cowan, MD, and Sally Fallon Morell tackle the true causes of COVID-19.

On September 26, 2019, 5G wireless was turned on in Wuhan, China (and officially launched November 1) with a grid of about ten thousand antennas—more antennas than exist in the whole United States, all concentrated in one city. A spike in cases occurred on February 13, the same week that Wuhan turned on its 5G network for monitoring traffic. Illness has subsequently followed 5G installation in all the major cities in America.

Since the dawn of the human race, medicine men and physicians have wondered about the cause of disease, especially what we call “contagions,” numerous people ill with similar symptoms, all at the same time. Does humankind suffer these outbreaks at the hands of an angry god or evil spirit? A disturbance in the atmosphere, a miasma? Do we catch the illness from others or from some outside influence?

As the restriction of our freedoms continues, more and more people are wondering whether this is true. Could a packet of RNA fragments, which cannot even be defined as a living organism, cause such havoc? Perhaps something else is involved—something that has upset the balance of nature and made us more susceptible to disease? Perhaps there is no “coronavirus” at all; perhaps, as Pasteur said, “the germ is nothing, the terrain is everything.”

Mentioned by Dr. Tom Cowan in the video above: 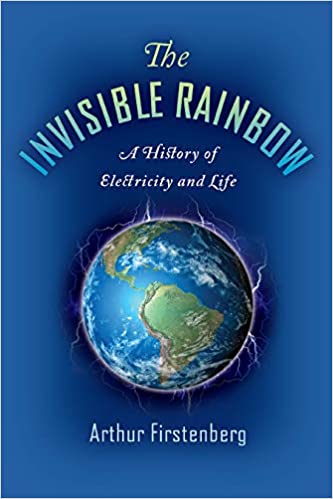 Electricity has shaped the modern world. But how has it affected our health and environment?

Over the last 220 years, society has evolved a universal belief that electricity is ‘safe’ for humanity and the planet. Scientist and journalist Arthur Firstenberg disrupts this conviction by telling the story of electricity in a way it has never been told before―from an environmental point of view―by detailing the effects that this fundamental societal building block has had on our health and our planet.

In The Invisible Rainbow, Firstenberg traces the history of electricity from the early eighteenth century to the present, making a compelling case that many environmental problems, as well as the major diseases of industrialized civilization―heart disease, diabetes, and cancer―are related to electrical pollution.

Thomas Cowan, M.D., has studied and written about many subjects in medicine including nutrition, anthroposophical medicine and herbal medicine. He is the co-author  (with Sally Fallon Morell) of The Contagion Myth – Why Viruses (including “Coronavirus”) Are Not the Cause of Disease.

He is also the principal author of The Fourfold Path to Healing and co-author (with Sally Fallon) of The Nourishing Traditions Book of Baby and Child Care.

Dr. Cowan has served as vice president of the Physicians Association for Anthroposophic Medicine and is a founding board member of the Weston A. Price Foundation®.

He also writes the “Ask the Doctor” column in Wise Traditions in Food, Farming, and the Healing Arts (the Weston A. Price Foundation’s quarterly magazine) and has lectured throughout the United States and Canada.