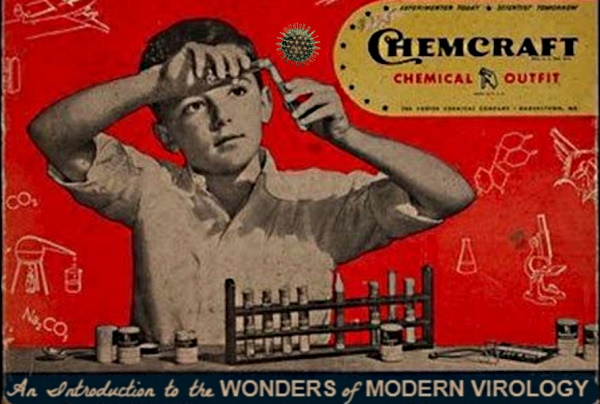 To those of us that know that virology’s “isolation” and genomic sequencing methodologies are anti-scientific, it is still interesting to see the proponents of the nonsense offer official explanations about what they are up to.

Here in New Zealand, the Institute of Environmental Science and Research (ESR) is responsible for some of the alleged isolation experiments and genomic sequencing of the imaginary “SARS-CoV-2” particle, that they claim is responsible for the clinically undefined illness “COVID-19”.  On the 9th of February 2022, they responded to questions surrounding the methodology of their cell culture and genomic sequencing experiments in relation to an Official Information Act request (which is analogous to a Freedom of Information request).

Once the cells are 90 – 100% confluent, they are inoculated with 500 uL of diluted clinical sample (sample is diluted 1:10 in Infection media),10 mL of Infection Media is added to the flask.  Infection media is made up of DMEM with 1% pen/strep/gentamycin, 1% Nystatin, 1% Glutamax, 1.5% Hepes plus 4ug/mL TPCK added.”

The “clinical sample” will be something like a crude nasopharyngeal sample taken from a patient.  These specimens contain human tissue (from the host and other individuals in close contact with them), various bacterial and fungal elements, and whatever other material was in the patient’s mucosa.  Amongst all this biological soup is the alleged SARS-CoV-2 virus, which of course, has never been directly found in any person.  Apparently there can be 200 million copies of the virus in a sneeze but strangely they can’t find any in an “infected” individual.

Instead they resort to tissue culture experiments, as the ESR continues to explain…

“The flasks are then placed into an incubator and monitored for cytopathic effect (CPE) A SARS-CoV-2 N gene PCR is performed on the diluted 1:10 clinical sample and on the supernatant of the flask after 1 week of incubation (or sooner if 100% CPE is evident). CT values for both specimens are used as well as the CPE observed in the flask to determine if viral culture has been successful.”

Cytopathic effects are non-specific and are simply the observation that cells being stressed in a test tube eventually break down and die, with some cells producing vesicles.  However, in the world of virology it is seen as evidence that a virus is at work and is somehow destroying the cells from within.  “SARS-CoV-2 N gene” is a misnomer because there has never been a demonstration of a viral particle that contains this genetic sequence.  Even more problematic is that there’s never been a demonstration of any viral particle.  However, here we see them claiming “successful” viral culture if they detect a single short genetic sequence by PCR amplification.  Note to virologists: detecting genetic sequences of unproven provenance does not equal virus.

Then we get to another interesting part…

The method above is also used for the negative control and the flask undergoes the same conditions as the flasks used for viral culture, however we use Infection media only.”

How on earth is this a comparable control experiment? – they added no control sample to their culture brew.  In their first experiment they added a veritable biological soup containing human tissue along with various microorganisms and other organic fragments (everything present in a respiratory tract sample), and their alleged virus of course.  Examples of valid control experiments would be:

Ironically, both of the above become meaningless in the case of “COVID-19” as it has no specific symptoms, signs, or investigations outside of the PCR result – a PCR result that has never been validated to a clinical condition.  In fact, a priori the PCR could never be validated in this application as it is simply a tool to amplify selected genetic fragments, not determine their origin or the significance of their presence in mixed biological samples.  So, in the case of (1) above, many well people are said to have “COVID-19” and in the case of (2), there is no way to distinguish a novel clinical condition.  Dr Sam Bailey explained these problems back in 2020 in “What is a COVID-19 Case?” – a video banned by Big Tech after several hundred thousand views but still available here.

The wheels really fall off the ESR’s response when they are asked to explain how they purify the alleged virus sample for genomic sequencing and compare this to a control:

[• The degree of purity of the “virus” sample used in the sequencing experiment.]
The protocols used for amplification of the SARS-CoV-2 virus consists of primers that specifically and selectively amplify the viral material, any remaining host or bacterial material is filtered out programmatically prior to data analysis.”

Either they don’t understand the question or are being disingenuous here.  Their response doesn’t provide any evidence that they have a virus, let alone have attempted to purify it, in the analysis of its purported genome.  They are simply using a process that amplifies sequences they have artificially selected but as it is a mixed sample they cannot demonstrate the origin of them.  There is no way to claim this is “viral material” because no one has ever demonstrated that these sequences come from inside a virus, let alone belong to “SARS-CoV-2”.  They are simply building on the nonsense that has spun out of control on GISAID.org where not one of the millions of deposited “genomes” has been shown to come from inside a viral particle.  It’s turtles all the way down with these contrived “genomes”.

And with regards to the ESR’s “controls”?…

“[• All details of the control group that was used when comparing the results of sequencing:

o the total nucleic acid extracted from the “viral lysate” (from the experimental group), versus

o the total nucleic acid extracted from the non-viral lysate (from the control group).]

The protocols used to extract RNA from clinical samples do not yield a uniform quantity as this depends on the viral load within a sample. Details about the ranges obtained and used for further analysis are published in detail in several scientific peer-reviewed publications and can also be found on the publicly accessible protocols.io website, link provided below as requested.”

They appear to have dodged the question and the protocols provide no evidence of valid control experiments.  The ESR have been asked to clarify this but we can already see they are not adhering to the scientific method.   I also looked at the four publications that they suggested but these simply confirmed the problem: there is no evidence of any virus and the world is being duped in this war on humanity.

In fact, by definition, there has never been a demonstration of any disease-causing virus ever, full stop.  Even if the ESR performed valid genomic control experiments there would still need to be further experiments to demonstrate the existence of a replication competent, obligate intracellular parasite that causes disease in a host.  In other words, the actual existence of a virus.  It makes me wonder whether the virologists are going to change the very definition of a virus soon in order to keep the whole façade afloat.  However, once people realise that virology has never fulfilled its own postulates, they can take a major step away from this health misconception and ignore any of the related damaging measures and “treatments” coming from the medical-pharmaceutical complex.