Families & Communities Take a Stand Against Microwaves, 5G & RF/EMF That Are Destroying Our Health

Families & Communities Take a Stand Against Microwaves, 5G & RF/EMF That Are Destroying Our Health 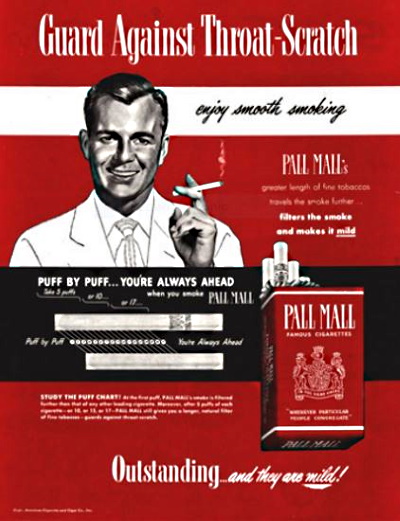 When I was living in Northern California from 2008-2010, the state was rolling out wireless smart utility meters.  I was one of the individuals who became disabled as the result of exposure to the pulsed microwave radiofrequencies.  California held a number of hearings where individuals who were concerned about billing fiascos, privacy, security, cost, green-washing, surveillance, and health damages gave testimony.

I remember the testimony of one father whose young son had been in a serious accident and was being sent home to convalesce and heal . . . and it reminded me that any of us, in this point in time, might believe that smart meters are safe. But our circumstances can change in a moment. Many of us were already losing ground due to lack of sleep and constantly being induced by the frequencies – what would the experience be for a child with a metal plate in the head?

For those of us already recognizing that the meters and infrastructure installations were capable of causing tremendous disruption to normal, healthy brain function, it was a terrible experience to be in the presence of unresponsive, detached, autocratic decision-makers who ignored the early warnings for whatever reason, whether they did not believe what was happening, or didn’t care.

The posture of not believing and/or not caring has grown worse over time, with the unsubstantiated claims and prevailing beliefs that increased wireless telecommunication (including “fixed wireless broadband” and 5G) is safe, sustainable, and necessary. But as the industry spin and surveillance has increased, so has the dawning of reason.

Many mothers, fathers, and children have been recognizing risks, and taking action, throughout the country and around the world, and the numbers continue to increase.  Many communities, neighborhoods, and families are seeking to prioritize wired, rather than wireless options.

In our series at Natural Blaze counting down to Mother’s Day, we learned about:

Godelieve Richards, the new mother who co- founded the Piti Theatre Group with her husband Jonathan, in Massachusetts and Switzerland, on her experience of the acute onset of EHS, her journey to receive an accurate diagnosis, and the efforts she has to make to protect her home environment.

Kirstin Beatty, a young mother and teacher forced to leave her profession, whose daughter is her advocate, who despite isolation due to EHS, works actively on legislative efforts on a number of environmental fronts.

Courtney Gilardi, whose community is opposing a macrotower, with many neighbors and her family experiencing adverse health effects when the tower was “turned on” after being installed without the knowledge and consent of the community, questioning outdated and inaccurate exposure standards and lack of legislative response.

Virginia Hines, a psychotherapist, noting the opportunity for cognitive coherence as society adopts health-protective choices; for examples, speaker phone, wired ear buds, and a chiropractic office that hardwired to protect the safety of their patients (after measuring the RF emitted from an iPad being used, unquestioningly, to check in patients.)

In interviewing the women for Mother’s Day, a theme emerged: nearly everyone had some kind of experience or had been affected by the work of Peter Valberg. Because the product defense firm Gradient is located in Massachusetts, and the articles were based mostly around New England contacts, this pattern may not have seemed surprising. But in fact, Peter Valberg provided “expertise” to utilities promoting smart meters in many states, and provided testimony for regulators in many others – from Texas, Florida, Maryland, Arizona, Florida, Oregon, Pennsylvania, to Iowa.  The exorbitant fees for his brand of science come from ratepayers. He served as the primary health expert for the defunct, pro-industry. Smart Grid Consumer Collaborative, which had no consumers, and was comprised of both industry and regulators. 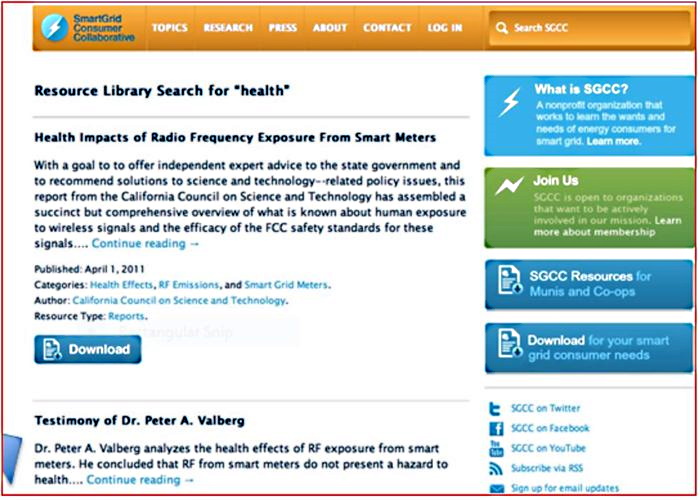 In fact, in 2012, the National Conference of State Legislators shared a report with decision makers nationally from the Utilities Telecom Council that relied on Valberg’s opinion (along with mercenary scientists from another notorious product defense firm.) 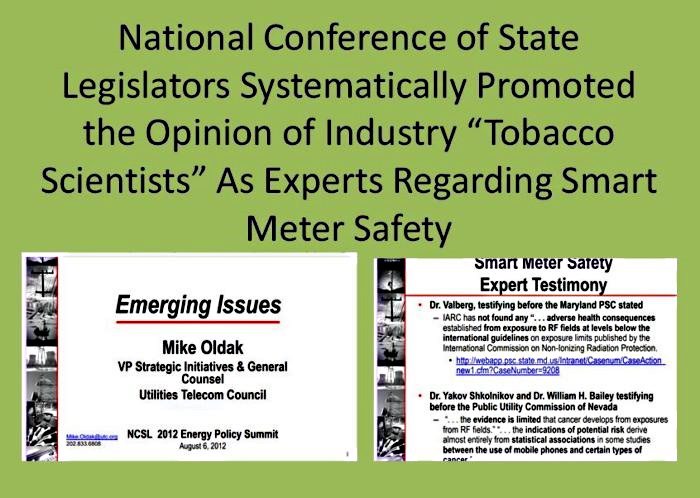 In a testimony submitted in Minnesota regarding magnetic fields and power lines, Valberg was asked, “Describe how you maintain your expertise in the area of health effects related to radiofrequency fields and EMF.” 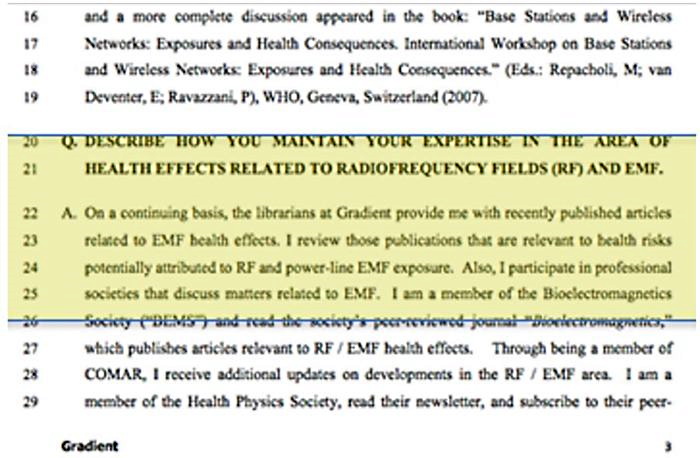 He responded, “On a continuing basis, the librarians at Gradient provide me with recently published articles related to EMF health effects. I review those publications that are relevant to health risks potentially attributed to RF and power-line exposure.”

Given that these firms that work for the wireless industry also work for the tobacco industry, including Valberg’s continuing work for Philip Morris Light cigarettes, I can only imagine a scene from the TV show Mad Men, with the cast sucking on cigarettes and the secretaries like Joan Holloway, “Now try not to be overwhelmed by all this technology. It looks complicated, but the men who designed it made it simple enough for a woman to use.”

No regulatory scrutiny of health concerns and complaints has been forthcoming, other than from engaged citizens.   The industry, regulators, and electeds, in most cases, with a few exceptions, checked off the box – “get a tobacco scientist to sign off on the safety!” and have kept going, while running over a portion of the population.

This denotes that we are operating at a time in history reflected by treacherous collaborations between powerful entities.  It is one level of evil to see tobacco science applied in a courtroom regarding adult consumers who unwittingly smoked and destroyed their health.   It is another level of evil to see tobacco science underpinning federal infrastructure agendas that will extend to every neighborhood, under the banner of “Endless Frontiers,”  “addressing the digital divide,” and “telehealth access.” The wireless agenda is being forcefully imposed on every man, woman, child, and nature environment, from land to sea to space, not only in the U.S., but worldwide.  The implementation has been weaponized by enabling legislation that abuses human rights, including property rights.

This week, we begin our countdown to Father’s Day, featuring fathers, sons, brothers, uncles, husbands, and friends who are engaged in the 5G/EMF/RF issue, whether due to smart meters, like Paul; or cellphone towers next to school, like Jeff; or WiFi in school, like David. We also highlight some of the researchers, scientists, and physicians working earnestly on the issue of the EMF/RF environmental stressor and pollutant.

None of them rely on “secretaries to provide recently published articles.”

Some treat actual patients, some conduct peer-reviewed scientific research.  They don’t talk about “blue ribbon panels,” or “prepare an in-depth analysis,” using their intellectual gifts to protect harmful industries and to sustain harm and injury by irresponsible industries.

Elected and unelected officials who are not ready, willing, and able to practice discernment regarding the integrity of the experts they reference cannot be trusted to safeguard communities, human health, and the environment.  This is malfeasance. The product defense firm industry must be removed from the driver’s seat of technological innovation, because the products the industry promotes are not safe. It’s not rocket science.

It’s time to require that the tech industry’s “get of jail free” card for health and environmental damages be revoked.  It’s time to hold ourselves accountable, as a species, for rejecting consumer products that pose health risks, and to require the industry to develop safe products and infrastructure.

It’s way past time to move the needle on the RF/EMF science.

In honor of Father’s Day, as we start our countdown, here are “a few good men.”

“Stop cell towers on Schools” by a Flint Michigan Father

Patricia Burke works with activists across the country and internationally calling for new biologically-based microwave radio frequency exposure limits.She is based in Massachusetts and can be reached at [email protected]