As Coronavirus fears have gripped the world for months, a litany of scientific scandals, inconsistencies and frauds have drawn the public’s attention to an underbelly of our agenda-driven scientific community.

From the flimsy Imperial Model that kicked off lockdowns in the U.S. and UK, to the Lancet’s hydroxychloroquine study retraction, corporate science is being scrutinized like never before, and with excellent reason.

And while the medical establishment community has experienced one egg on its face after another, and corporate media grasps at straws to report on whatever can amp up ratings and fear to “11,” you probably missed a BIG story.

On June 8, a lawsuit demanding that the Environmental Protection Agency (EPA) ban fluoride chemicals from U.S. water supplies went to trial in the U.S. District Court for the Northern District of California in San Francisco.

The case, Food & Water Watch, Inc. et al v. EPA, is the first in which plaintiffs have succeeded in going to trial after EPA denied their petition for regulating the substance under the Toxic Substances Control Act section 21.

Three groups brought the case against the EPA to court: Fluoride Action Network, Food and Water Watch, and Moms Against Fluoridation. The plaintiffs are requesting a prohibition on fluoride in U.S. water supplies under the Toxic Substances Control Act of 1976, which warrants the EPA to stop the usage of a chemical to protect public safety.

Those who’ve challenged this view in the past, whether from academia or the general public, have been quickly labeled quacks, conspiracy theorists and other PR industry terms. But gradually, over time and experience, attempts to distract away from inconvenient truths surrounding the fluoridation of public drinking water supply have failed.

A landmark shift in the dogmatic science of water fluoridation occurred in 2019. The highly respected Journal of the American Medical Association (JAMA) Pediatrics published a study: Association Between Maternal Fluoride Exposure During Pregnancy and IQ Scores in Offspring in Canada.

Funded by the Canadian government and the U.S. National Institute of Environmental Health Science, the study examined the association between fluoride exposure during pregnancy and the IQ scores of the children at ages 3 and 4 years of age. It concluded

“…maternal exposure to higher levels of fluoride during pregnancy was associated with lower IQ scores in children aged 3 to 4 years. These findings indicate the possible need to reduce fluoride intake during pregnancy.”

Plaintiffs in the current EPA lawsuit called expert witness Dr. Bruce Lanphear, a professor of health sciences at Simon Fraser University in Canada, and author of the JAMA Pediatrics IQ study. He testified that higher exposure to fluoride during pregnancy “was associated with diminished IQ scores in children at 3 to 4 years of age.”

Lanphear testified that he was not being compensated for his work in the legal case, but that he believed it was part of his public service duty to participate in it. “We’ve allowed children with rapidly growing brains to be exposed to toxins,” Lanphear told the court.

JAMA Pediatrics Editor-In-Chief Dimitri Christakis stated during an episode of Editors Summary podcast, “For me, before there were ‘anti-vaxers’ there were sort of ‘anti-fluoriders.‘”

He shared that while he was going through residency, the traditional teaching he received was that “fluoride is completely safe. All these people that are trying to take it out of the water are nuts.” He commented about the recent study’s findings saying they were “sizable” and “on par’ with the IQ drops seen in children exposed to lead.  When Christakis was asked what he would recommend as a pediatrician if a pregnant mother came into his office he replied “I would advise them to drink bottled water.”

Studies on fluoride’s effect on the brain include 65 IQ studies, 156 human studies, 286 animal studies, 36 cell studies and 40 review studies. Those who have questioned water fluoridation are regularly labelled anti-science, accused of ‘cherry-picking’ scientific studies to fit a narrative. A comparison below of agencies who oversee regulation and promotion of water fluoridation vs the grassroots organization Fluoride Action Network paints a different picture. 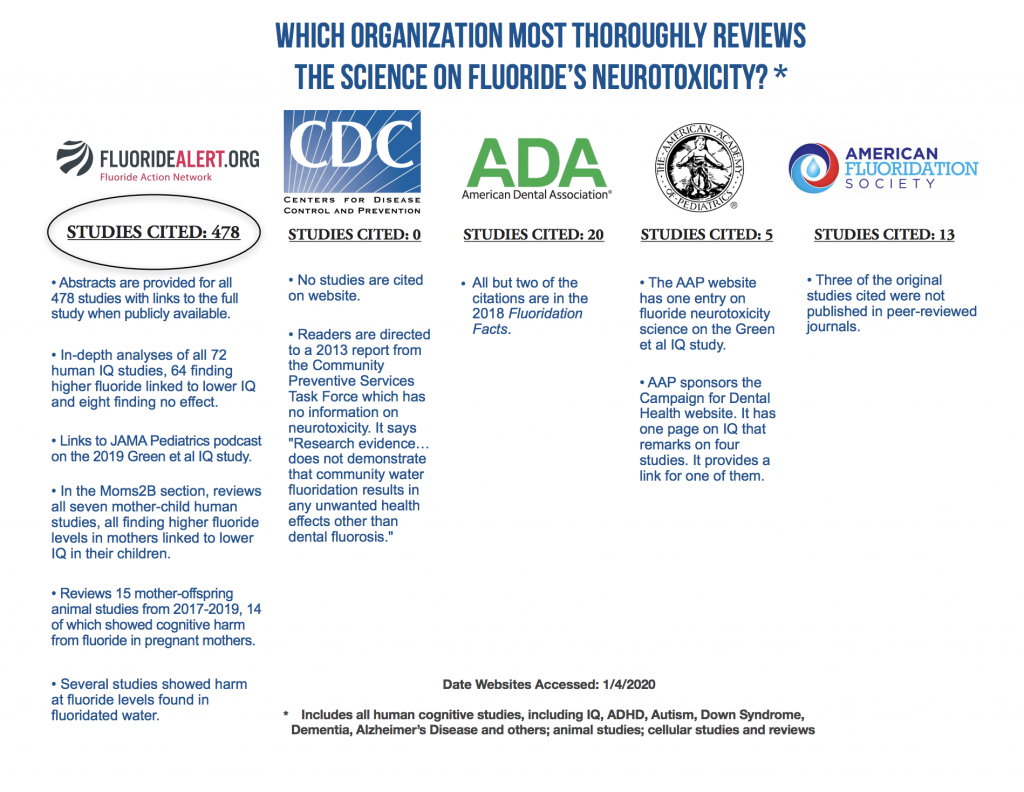 The trial has seen three days of testimony and is slated to restart Monday. Plaintiffs’ witnesses include four decorated and well-respected academics who have been used in the past by the EPA as go-to experts on the neurotoxicity of lead and mercury.

In the trial’s opening statements, plaintiffs lawyer Michael Connett said it ”will be undisputed in this case that babies who are bottle-fed with fluoridated water receive the highest doses of fluoride of any age group.” At the time of “their greatest vulnerability, we are exposing infants, often from the poorest, most disadvantaged communities, to a very high burden of fluoride,” Connett said.

Day two saw five hours of testimony by Philippe Grandjean, MD, ScD, an epidemiologist at the Harvard School of Public Health and head of the Environmental Medicine Research Unit at the University of Southern Denmark. Dr. Grandjean found “no reasonable doubt that developmental neurotoxicity” was “a serious human health risk associated with elevated fluoride exposure.” That exposure, he said, is “occurring at the levels added to drinking water in fluoridated areas.”

Reporting on the trial, LAW360.com writes:

Dr. Kris Thayer, director of the EPA’s Chemical and Pollutant Assessment Division, testified by video Wednesday that while there are limitations to the data collected in studies of the impact of fluoride exposure on animals, the animal studies support the conclusion that fluoride causes neurotoxic effects in humans. Thayer, who previously worked at the National Toxicology Program, said the human brain is more vulnerable to toxic agents at infancy than adulthood because infants don’t have fully developed blood-brain barriers.”

The court also watched the deposition video from Casey Hannan, director of the CDC’s Oral Health Division who confirmed that his agency agreed with the National Research Council’s 2006 findings that fluoride “interfere with the function of the brain and body by direct and indirect means…”

Another key piece of testimony came from Kathleen M. Thiessen, Ph.D., who was pivotal in creating the landmark 2006 National Research Council’s consensus study report ‘Fluoride in Drinking Water: A Scientific Review of EPA’s Standards‘. Dr. Thiessen admitted that sodium fluoride, the same version the EPA regulated as a pesticide, is being added to water supplies. She also conceded that the EPA has failed to assess the risk of fluoridation based on neurotoxicity.

From glyphosate to opioid painkillers. From talc to Risperdal. From vaccines to masks. Science is on trial in America and the public is taking notice. The outcome of the current fluoride trial has sweeping implications socially, culturally and scientifically too vast to cover in one article.

The trial is currently scheduled out through June 19. Follow The Fluoride Action Network’s Twitter page for live tweets during the trial proceedings. To listen or watch directly, use the links outlined by Fluoride Alert HERE.