The weather makers continue to manufacture winter weather whiplash in an ever more desperate attempt to confuse and divide populations regarding the true state of the climate disintegration. “Winter Storm Dylan”  is the latest creation of the climate engineers that is being orchestrated to coincide with the Christmas holidays. How much of a “storm” will “Winter Storm Dylan” actually amount to once this completely engineered mainstream media hyped “winter weather event” is all said and done? Patented processes of “chemical ice nucleation for weather modification” (a primary aspect of climate engineering operations) will likely cause considerable surface icing scenarios as these materials reach ground level. The endothermic reacting elements used in the geoengineering operations also tend to dry up much of the available atmospheric moisture. In their attempt to create the illusion of ferocious winter weather on a rapidly warming planet, the geoengineers are actually further fueling the overall planetary heating.

The gravity and immediacy of the rapidly unfolding climate and biosphere implosion cannot be overstated. Has the human race already sown the seeds for certain demise? The 7 minute video below spotlights the latest weather warfare assault that is being waged by the climate engineers.

Exposing and halting the ongoing climate engineering atrocities is the great imperative of our time. We must heed the calling of conscience and fully face this most critical issue. All those that are already awake are desperately needed to assist with the effort to wake others. A critical mass of awareness must be reached in the population, this is the only way forward in this fight. 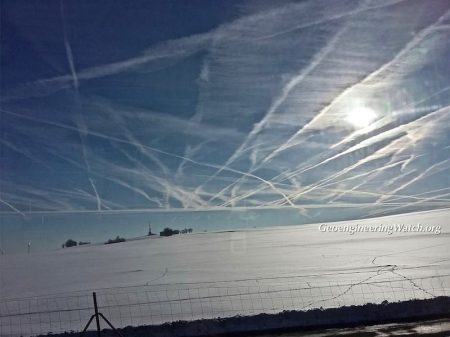 We must each learn to become efficient and effective in our efforts to wake others, sharing credible and compelling data is key. If we do not do all we can to make a difference today, we will not have tomorrow.
DW