Does the sun feel scorchingly hot? Does it feel much more intense than in decades now past? It is not your imagination. Not only are UV-B radiation levels escalating exponentially, so is the even more dangerous UV-C spectrum. All official UV monitoring sources tell us that lethal UV-C radiation from the sun is stopped 100,000 feet up by our atmosphere. Official agencies tell us that no UV-C radiation penetrates the atmosphere below 100,000 feet of elevation. These are blatant, glaring, and very dangerous lies. GeoengineeringWatch.org continues to work directly with a former NASA aeronautics engineer (a veteran of 40 years in the field of atmospheric study and ozone depletion) who is doing his best to sound the alarm on the critical UV radiation danger. Ongoing covert global climate engineering programs are destroying Earth’s protective ozone layer. Many mainstream sources confirm ozone damage “will” occur from geoegineering (along with countless other consequences), though such sources still will not admit geoengineering has long since been fully deployed. 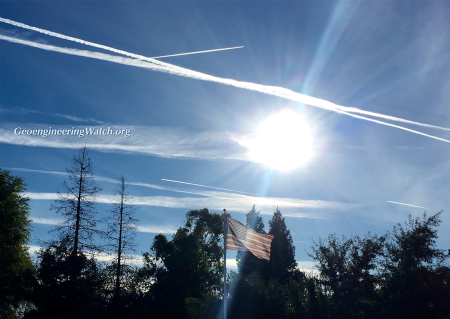 How dire is the situation? Far worse than almost any yet imagine. The chart below was assembled for GeoengineeringWatch.org by our NASA engineer colleague. To make the severity of the UV-C radiation exposure crystal clear, the chart was kept as basic as possible. Note that the baseline for the chart UV-C level is 0.00, this is the stated level of UV-C radiation from ALL official UV metering sources (many of the same agencies that officially deny the ongoing climate engineering reality). The chart’s skyrocketing red line of actual UV-C measurement speaks for itself. 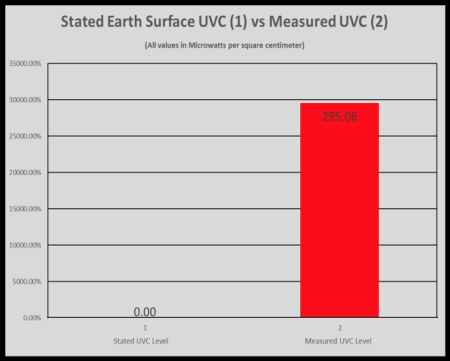 The UV-C radiation reading shown in the chart above was taken on 1-1-17. Ongoing measurments are in a similar range. The danger UV-C radiation exposure poses to the entire web of life cannot be overstated. 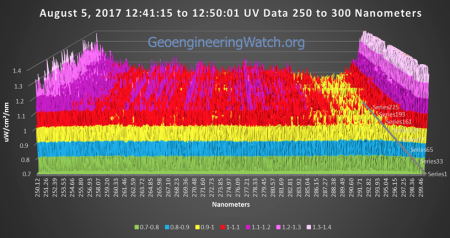 The ozone destruction / UV radiation increase equation is extremely non-linear, this fact must be remembered and considered.

Below is a direct quote from a World Health Organization (WHO) publication on UV radiation, the total denial of UV-C radiation reaching the surface of Earth is nothing less than a lethal lie.

Short-wavelength UV-C is the most damaging type of UV radiation. However, it is completely filtered by the atmosphere and does not reach the earth’s surface.

What does a Stanford University Study tell us about dangerous UV-C radiation? Yet another lie.

The UV-C region of the UV spectrum includes wavelengths below 280 NM; these highly energetic wavelengths are effectively absorbed by ozone in the stratosphere.

The CDC (Centers for Disease Control) gives us still another pacifying lie in regard to UV-C radiation.

UVC radiation is extremely hazardous to skin, but it is completely absorbed by the stratospheric ozone layer and does not reach the surface of the Earth.

From the University of Vermont:

The shortwave UV radiation (UV-C) poses the maximum risk. The sun emits UV-C, but it is absorbed in the ozone layer of the atmosphere before reaching Earth.

UV-C is completely absorbed in the upper atmosphere.

The global power structure (and the many institutions it now completely controls) cannot afford to have populations awakened to the now existential threats we face as a direct result of the ongoing illegal climate engineering / solar radiation management programs. 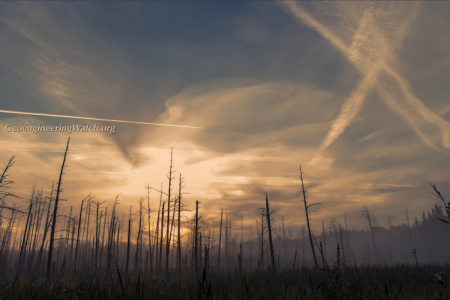 Below is a statement that has just been made by the retired NASA engineer that must remain anonymous at this time for many obvious reasons.

Looking to the near future:
Events in the upper Ozone Layer have changed again – for the worse.
My research on the Ozone layer and UV-C solar radiation has been extremely difficult due to the lack of public information and cooperation from the science community – this has changed recently.
With the current administration completely denying Climate Change, they cut funds to several agencies, resulting in a massive layoff in the science sector – some of those scientists and engineers are now coming forward with information on our atmosphere and upper ozone layer.
Collecting this data is tenuous, as most researchers and scientists have signed “non-disclosure” agreements and could suffer massive fines and/or jail time if their research data were ever to come into public view.  Anonymity and Caution are key words here.
However, there is an answer to our atmospheric issues, once the basics are understood – for example:  our Upper Ozone Layer is collapsing – why?
The answer is simple:  due to increased geoengineering efforts, and the previously existing fossil fuel pollutants in our atmosphere, there is less oxygen reaching the Top of Atmosphere (TOA).
The oxygen molecules created from our oceans, are being destroyed by massive particulate matter being disbursed by aircraft, and other pollutants, before it can reach the Tropopause.  An estimate of oxygen reaching Tropopause is between 20 to 26% of what is normal.
Why is Oxygen important?
Oxygen, when irradiated by Solar UV-C – creates ozone.  Then it performs another critical function – it forms a barrier to harmful UV-C. It forms a shield for all life on Earth to the very worst wavelength of UV-C at 270 nanometers.
So what do we do?
It is imperative that we put the oxygen back at the Top of Atmosphere, and stop geoengineering – all of it, the SAI programs of the Military and the SRM programs from scientists.
Time is critical.  Many hundreds of thousands of plants and animals are gone forever – do we only “get the picture” when it’s our turn? 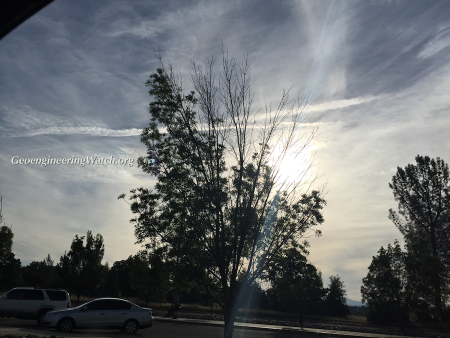 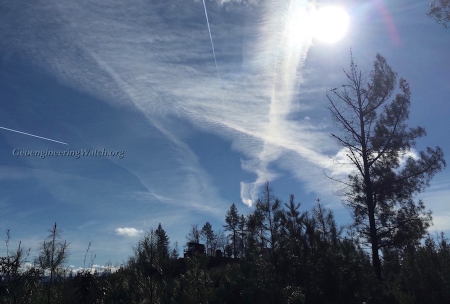 The die-off of forests around the globe is accelerating exponentially. The ongoing climate engineering assault (and the resulting ozone layer damage resulting from it) is a primary causal factor. Shasta County, California. Photo credit: Jovyde Wigington

The short video below documents the rapid die-off of formerly thriving forests in Northern California.

This next video (90 seconds) highlights the impact of scorching UV radiation levels on tree bark.

Many previous warnings about the UV radiation threat have been sent out by Geoengineering Watch and our NASA associate. With each passing day that the human race remains on the current course, the odds of averting total planetary omnicide (in the near term horizon) are diminished. All those who are awake and aware of what is unfolding are needed to help sound the alarm. All of us sharing credible data with groups, organizations, and individuals is critically important. Please, join us in the all important battle, every day counts.
DW