How Corporate Media Embraced Its Extinction

“Our liberty depends on the freedom of the press, and that cannot be limited without being lost.” — Thomas Jefferson

“Mainstream” journalism has ended up in the exact place it was never created to occupy – as an enthusiastic mouthpiece and amplifier of government talking points and corporate power.

In this era of fake news, the depth and control over medical and health journalism has reached breakaway speeds. Even as corporate media outlets attempt to bring balanced reporting to the relentless deluge of lawsuits—stemming from widespread harms of pharmaceutical company drugs and products—there remains some reporting which is more equal than others: vaccines

Vaccines remain the unassailable and protected product of pharmaceutical companies; they enjoy a free pass from deserved scrutiny. This vaccine worship appears to reach a sort of religious-like fervor, and no religion lets you challenge its god.

Whether opioid drugs, talc powder, or herbicides, one repeating theme revealed in discovery documents from ongoing lawsuits has been to underplay or just plain hide from the public the harms such products are known to inflict. This makes investigation difficult enough, but
media reporting and debate of vaccine safety is heavily limited and carefully controlled.

The media landscape is changing, however. The sheer volume and historic payouts from lawsuits showing harm and challenging the safety of corporate drugs and products can’t be ignored. The ”mainstream” corporate media’s hand has been forced to report on the events.

Whether opioid drugs, talc powder, or herbicides, one repeating theme has revealed itself in court documents. Unsealed internal records show that industry has continuously worked to underplay, or just plain hide from the public the harms their products could inflict. Such deception makes investigation difficult enough, but media reporting and debate of vaccine safety is heavily limited and carefully controlled

In the past, corporate media would employ the technique of a ‘limited hangout’ to frame such events in favor of, and to protect the bottom lines of corporate power.

‘Limited hangouts’ are used when false cover stories or talking points to misinform the public are compromised. In such an event, partial admissions or volunteering some truth is likely to have lesser impact to withhold (and “protect”) the more significant key and damaging facts. The desired effect is to narrow the public’s focus on this new, limited information deflecting thought of pursuing the matter further to expose the larger story.

An example of a modern-day limited hangout with a digital spin came from the Washington Post during their reporting of a flu vaccine study. The limited talking point is that vaccines are ‘safe and effective.’

Yet the flu shot has not been evaluated for overall cancer risks or safety in pregnant women. In addition, pre-licensure safety testing the FDA relied upon to rollout the shot upon the public did not enroll pregnant women.

When the Washington Post ran the headline, ”Researchers find hint of a link between flu vaccine and miscarriage,” they failed to inform their readers that the “hint of a link” was actually over a seven-fold increase. The Washington Post gave an obstructed view into the window of potential harm for pregnant women receiving the flu vaccine without admitting to the overall lack of safety science. This talking point continues to be heavily pushed by government agencies and the medical industry.

But the Post’s deceptive techniques went further. After being mocked on social media for their superficial report, they changed their original headline to a more authoritative ”What to know about a study of flu shots and miscarriages.” However, they still lied to their readers by omitting the dangers and ineffectiveness of the flu shot. 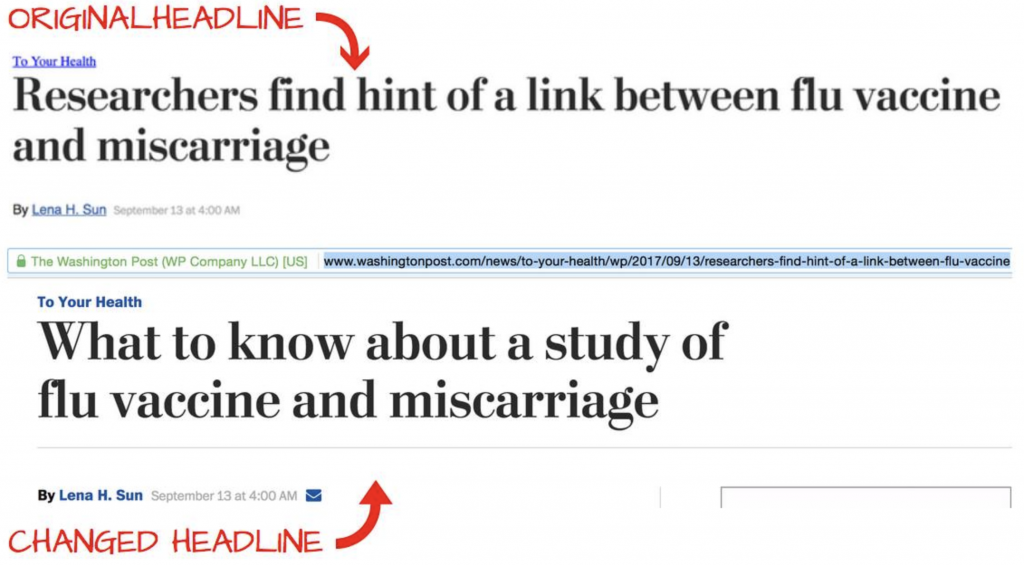 The internet’s ability to erase facts in realtime has added a new layer upon narrative-control techniques used by the media to correct their record in secrecy. And when they are caught in an outright lie, their attempts to hide the dishonesty should cause concern.

When longtime pro-Big Pharma outlet the Sacramento Bee was caught trying to stoke hysteria around measles cases, readers forced retractions from the outlet.

The SacBee presented the public with the idea that there exists a risk of autism from the measles. In their opening paragraph, the SacBee story warns, “…health experts say [measles] can cause deafness and autism in its survivors.” The article goes on to state “Measles has been proved to cause intellectual and neurodevelopmental disorders, including autism, in children.”

In the MIND institute’s original data, the researchers were referring to rubella, not measles. The SacBee took it upon themselves to create a false narrative by deceptively replacing the word “rubella” with “measles” in the MIND Institute’s research. 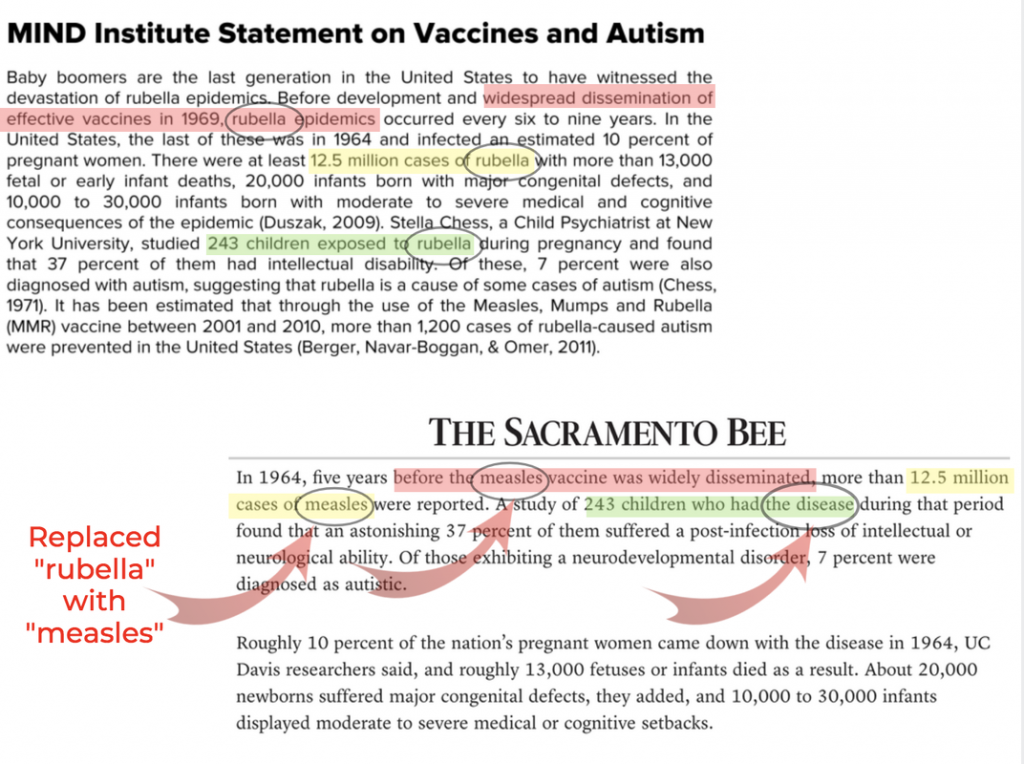 When the ”mistake” was brought to the attention of the Sacramento Bee by author and medical research journalist Neil Z. Miller, their response was to remove the link to the original research, effectively denying readers access to the scientific truth for the sole purpose of protecting lies. The article, once publicly available, now lives behind a paywall on the Sacramento Bee website.

The crumbling veneer which has been witnessed in certain areas of corporate press has spawned a popular new area of public interest. Spearheaded from outlets like Project Veritas, turning the perpetually outward-facing spotlight around to investigate corporate media. Although they have uncovered dangerous censorship of free thought, they are inspiring a courageous investigatory spirit that once surged through the veins of newsrooms in past generations.

“The media has become an industrial system of production that manufactures consent. This is true whether said by Noam Chomsky, James O’Keefe, or Glenn Greenwald. Political implications aside, the media has become an organ of propaganda that is only about commercialism, clicks, ratings, power and influence and political advocacy. All the while, the press evades scrutiny by appealing to rights afforded by the 1st amendment, while adhering to none the accompanying duties.”

When the media circles its wagons to collectively protect one specific product made by a notoriously untrusted Big Pharma industry the public must question why. When both the media and its small, exhaustively cited stable of “experts,” try and force an idea of “settled science” while stifling debate, the public must demand transparency. When the safety of a profitable product from previously criminal manufacturers can no longer be questioned, the scientific community must call out the lack of proper safety studies.