How to Worship Your Government

Home / Featured / How to Worship Your Government

“The President of the United States is in danger of losing the mandate of heaven.”

Thus spake Pat Robertson during the recent brouhaha over Syria, where the unthinkable notion that the US might actually pull out of a war zone instead of sending more troops in began to materialize last week.

Now, you might be tempted to dismiss this as just another raving of Pat “God blessed the Gulf War” Robertson, and you wouldn’t be wrong. But still, that’s quite the phrase: The “mandate of heaven.” What does it mean?

Well, it turns out he didn’t just make that up himself.

The “Mandate of Heaven” is an argument for the legitimacy of government that arose in ancient China. Called “天命” (Tianming) in Chinese, the concept rests on four basic principles:

-Heaven grants the emperor the right to rule;

-As there is only one Heaven, so there can be only one emperor at a time;

-The emperor’s right to rule is dependent upon his virtue; and

-The right to rule is not granted to any particular family line in perpetuity.

Now you might wonder what the “mandate of heaven” has to do with the modern American presidential system, but, in fact, it points to something very important. It is one of those things that is so obvious that it is never spoken out loud except in times of extreme crisis. It is the question of where the legitimacy of the government—and our would-be “rulers”—comes from in the first place.

If you think these questions are silly and abstract philosophical ruminations, consider the spectacle that took place in Japan this week. In a grand display of ceremonial pageantry that seems like something from a different millennium, Japan’s new emperor, Naruhito, climbed up on a canopied altar 6.5 meters above a crowd of international dignitaries and formally proclaimed his accession to the Chrysanthemum Throne. 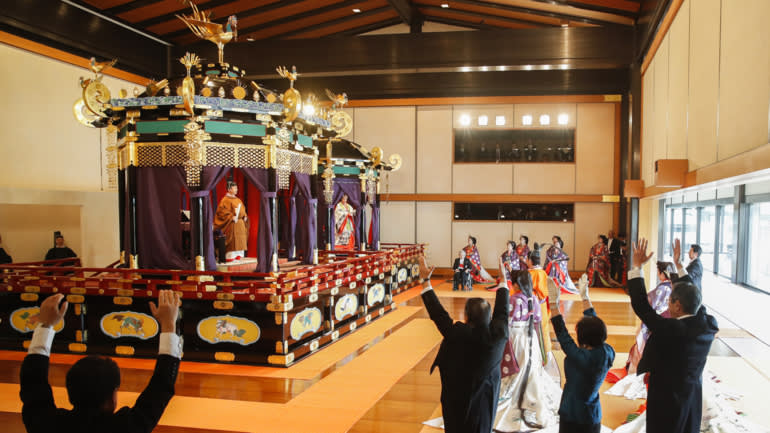 That night, the bigwigs in the Japanese government enjoyed a fancy court banquet with their guests, including Prince Charles, Belgium’s King Phillippe, and even embattled Hong Kong Chief Executive Carrie Lam. (It should be noted that the US sent Transportation Secretary Elaine Chao to witness the event because . . . Asian ancestry?) The hoi polloi, meanwhile, at least got a day off of work on the specially-proclaimed holiday (although not me, of course, because I don’t get a day off . . . ever!).

So why all the pomp and circumstance? Who cares anyway? The emperor doesn’t even really do anything, right? It’s like all those kings and queens and princes in Europe. They’re just window dressing who are wheeled out to wave at crowds from time to time, aren’t they?

Quite the contrary. The Japanese, like the Chinese of old, believe in a divine connection to their throne. In this case, though, they take it a step further. It’s not that the gods have granted some mandate to Naruhito to rule Japan based on some virtue litmus test. No, he is in fact of godly lineage himself, directly descended from the sun goddess, Amaterasu.

Now, you may think this is all very silly, but don’t worry; people don’t believe that Naruhito is actually a living god. No, of course not! People stopped believing that at the end of World War II when MacArthur and the Americans told them to.

. . .Well, some people still believe it, but they tend to be the crazies that every country have in ample supply (see Pat Robertson above). And the average Japanese doesn’t actually believe any of it, and probably never did. But if they were ever to ask from whence the legitimacy of the whole Imperial system and the emperor’s role as head of state actually derives, this is the hodgepodge of nonsense that would be fed to them. Luckily for the rulers, then, that people don’t tend to question their “master’s” legitimacy very much.

Now, tempting as it is to take the Orientalist route and claim this is all Eastern nonsense that has nothing to do with Western civilization, let’s not forget the Divine Right of Kings. That’s the old European political doctrine that the royal families have been specifically chosen by God Himself to rule over the people.

This idea can’t be dismissed as some ancient relic of a bygone era. The Monarch of the United Kingdom still uses Richard I’s old battle cry, “Dieu et mon droit!” as its official motto (despite the Saxe-Coburg-Gothas being several Houses removed from King Lionheart’s Plantagenets). And, depending which pub you happen to be in and the general state of lubrication, there are still some old royal loyalists who would be more than happy to engage in fisticuffs with anyone questioning ol’ Queen Elizardbeast’s divinely-granted authority.

This is why the American Revolution and the French Revolution were landmark moments in history. These were no mere tax rebellions or people upset about a lack of pastries (“Let them eat cake!”), they were a challenge to the fundamental legitimacy of monarchy itself. Telling, then, that even in their rebellion, the American revolutionaries had to turn to divine explanations for their new political philosophy. It was, after all, “the Laws of Nature and of Nature’s God” that entitled the people to their separate and equal station, and “their Creator” who endowed them with certain inalienable rights.

And this is why it is no mere analogy to say that statism is a form of religion. On the contrary. An appeal to the divine is necessary to bridge the gap between us mere mortals and the Mighty Lawmakers who have been granted the Divine Right to tell us what to do.

It is why there are extensive rules and rituals for handling the holy relics of the Church of Government.

And it is why so much statist pageantry still revolves around the concept that our “dear leaders” should be revered as divine figures themselves, whether subtly (the divine iconography that persists among representations of our “democratic representatives”) or not so subtly (the divine emperor declaring his accession to the throne from a raised platform in front of worshiping supplicants).

Although there are obvious similarities between the Western concept of the divine right of kings and the Chinese concept of the mandate of heaven, there are some important differences, too. The Chinese mandate, remember, is not granted to a particular family line, and it is not granted in perpetuity. It is only in effect so long as the emperor retains his “virtue.” And you’ll know it when he has lost this virtue; foreign invasions, famine, uprisings or other major disturbances are all signs that the emperor has lost his mandate and it’s time to find a new ruler.

Which brings us back to Pat Robertson and God Emperor Trump. Has Trump really lost the “mandate of heaven”? Well, since the question relies on a false premise—namely, that he ever actually had such a mandate—it remains unanswerable. But perhaps even the fact that the question is being asked at all is a step in the right direction.

Now if only we could all wake up, cast off the divine chains of these divine tyrants and rid ourselves of this Most Dangerous Superstition—the one that holds that a special class of people have the divine right to rule over us. And, having done that, civilization can leave its adolescence behind and become a fellowship of individuals, voluntarily cooperating for the betterment of the species. 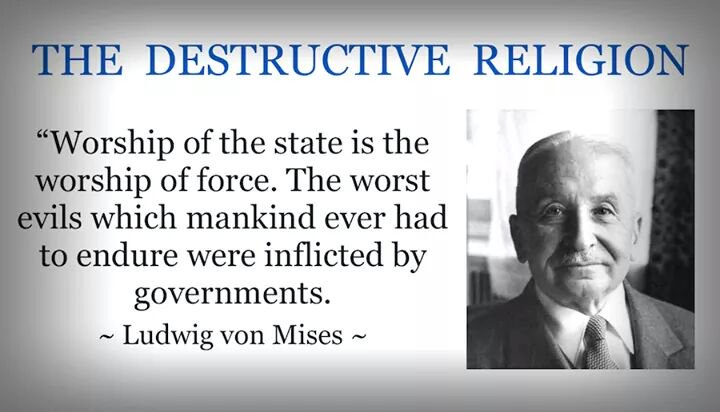