In 2015 Former Malaysian Prime Minister Mahathir Mohamad Warned Against Planned Global Genocide by Elites: “The Peace That We Will Get From This Is the Peace of the Graveyard.”

Home / Depopulation, Genocide, Eugenics / In 2015 Former Malaysian Prime Minister Mahathir Mohamad Warned Against Planned Global Genocide by Elites: “The Peace That We Will Get From This Is the Peace of the Graveyard.”

In 2015 Former Malaysian Prime Minister Mahathir Mohamad Warned Against Planned Global Genocide by Elites: “The Peace That We Will Get From This Is the Peace of the Graveyard.” 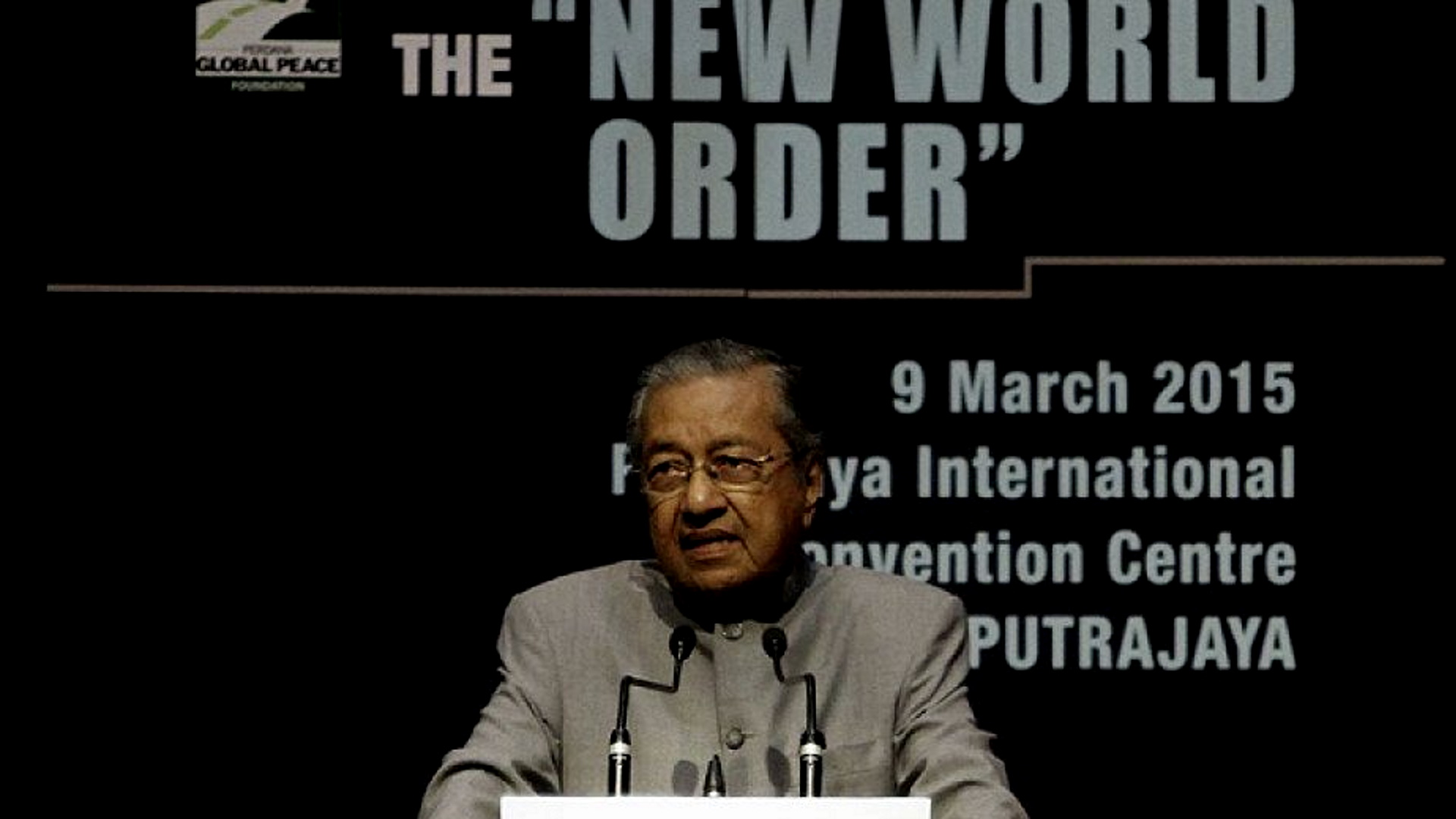 The globalist left has seized upon a new weapon to impose their agenda: the coronavirus pandemic.

At a March 9th, 2015 International Conference titled “The New World Order – A Recipe of War or Peace!” Former Malaysian Prime Minister Mahathir Mohamad warned that the ‘Elites want to reduce the world population to 1 Billion’ and will go to any length necessary to achieve their goal.

The conference was held at Putrajaya International Convention Center in Putrajaya, Malaysia, organized by the Perdana Global Peace Foundation (PGPF). PM Mohamad stated that the Trans-Pacific Partnership Agreement (or TPPA) is a strategy lead by the United States to dominate the world economy. Several guest speakers focused on borderless trade and globalization being used to usher in a one-world government.

“Basically, it is about having a world government. We should abolish all states, nations, and bodies but instead have only a one-world government. And that world government is to be by certain people, elites. People who are very rich, very intelligent, very powerful in many ways. They are the ones who will govern the world. There was not much talk about democracy or the choice of leaders, instead, there was to be a government by these elites who will impose their rules on everyone in this world. And for those who are unwilling to submit to them, there will be punishment,” Dr. Mahathir explained.

Dr. Mahathir also warned that the one-world government would not hesitate to invade and take over sovereign states to reach their goals.

Wealthy, powerful elites have long fantasized about presiding over a global government, where they have complete power over citizens. It’s speculated that the United Nation’s own Agenda 21 and 2030 Agenda for Sustainable Development has been used as the elite’s blueprint to depopulate the world.

The following propaganda video, produced by the left-wing organization Population Matters, claims most of the world’s challenges today are because of its dense population. We, humans, are the problem, and there are too many of us.

Mass, forced migration to the West promoted by multilateral organizations, left-wing governments, and organizations has been another vehicle for erasing borders. But as citizens push back against unvetted and potentially dangerous people flooding their countries, the globalist left has seized upon a new weapon to impose their agenda: the coronavirus pandemic.

Are Coronavirus Vaccines Part of the Depopulation Agenda?

Gates has had an unhealthy fascination, if not an outright obsession with depopulation, for decades.

Not only is Gates involved in the development of the new experimental injections, but he has stated that global warming is caused by too many humans living on the planet, advocated for a carbon tax, and recently purchased hundreds of thousands of acres of farmland.

In 2009, “The Good Club” comprised of well-known members such as Oprah Winfrey, Bill Gates, Warren Buffett, George Soros, Ted Turner, and David Rockefeller met to discuss how best to eliminate overpopulation and increase birth control, all in the guise of philanthropy. The group’s members are collectively worth hundreds of billions of dollars.

During a 2010 TEDTalk, Gates spoke about how introducing vaccines could help lower human’s CO2 output saying:

If we do a really great job on new vaccines, healthcare, reproductive health services through the Bill and Melinda Gates Foundation’s Family Planning services (i.e., abortion, birth control, infertility) we could lower that by perhaps 10 or 15%.

Gates’ interest in controlling the world’s population stemmed from his father, who was “pivotal in shaping his son’s world view” and sat on the board of Planned Parenthood for several years.

Planned Parenthood began as a eugenicist dream of Margaret Sanger to eliminate certain races from the population. It’s hard to ignore this connection. Know who else had a fascination with eugenics? Hitler.

“If you gave me only one wish for the next 50 years, I could pick who’s president;
I could pick the vaccine, which is something I love…”

Today’s “elite” are all but untouchable. When you have so much money that you own doctors, scientists, scientific papers and journals, the media, etc., it’s hard to imagine your average person being able to sift through the misinformation and propaganda being pushed on them. So instead, they’re willing to put themselves at risk by taking an experimental injection that hasn’t been thoroughly tested-all for the “greater good.”