Indeed, in an act of startling prescience, the incoming administration had been talking about a new “Domestic Terrorism Bill” for well over three months before the “riot” happened. The media had been calling for one for at least six. Major universities were writing papers about it.

It’s funny how often that happens, isn’t it?

I wrote at the time that the Capitol Hill “riot” could prove to be America’s Reichstag Fire – a fake attack, blamed on an invisible enemy and used to rush through restrictive legislation and emergency powers. A 9/11 sequel, extending the Patriot Act franchise.

Now, just a few short months later, the Biden White House has released their National Strategy for Countering Domestic Terrorism. Let’s take a look inside it, shall we?

SO, WHAT IS “DOMESTIC TERRORISM”?

The first thing to say about the “strategy”…is that it’s not really a strategy. It’s more of a mission statement or even a press release. It hits talking points, but not real policies. Its watchword is “vague” – in both definition of the problem and proposed solutions (with a couple of noteworthy exceptions, but we’ll get to that.)

For starters – who or what IS a “domestic terrorist”?

Well, their answer to that is, essentially, potentially anybody. They’re not identifying any particular ideology or cause or group – but rather EVERY ideology cause or group. I wrote, back in January, that any definition would be kept intentionally loose, and the strategy does not disappoint.

The cause of “domestic terrorism” can be racism, religious intolerance, environmental protest, anti-government feeling, animal rights, anti-abortion campaigners, “perceived government overeach”, “incel ideology”, “anti-corporate globalization feeling” or a mixture of any of the above.

“Domestic terrorists” may espouse violence or they may not espouse violence. They may work in groups, or be loners, or be loose associations with no organizational structure. They can be left wing or right wing, religious or secular.

They can be anybody who thinks anything.

There is a lot of entirely intentional vagueness here. Again and again, we are told that “the domestic terrorism threat is complex, multifaceted, and evolving”. They are keeping their options open.

Don’t expect ANY specifics on who is a “domestic terrorist” until AFTER any legislation is passed. That way, the great American public can insert their own personal bugbear into the ellipsis (and then be taken completely by surprise when it turns out the new laws apply to everyone).

That said, there have been some clues as to the kind of person that might be the target of any new anti-terror legislation.

He wasn’t alone, on this side of the Atlantic the head of the Metropolitan Police’s counter-terrorism unit “called for action against coronavirus anti-vaxxers”.

Even this document makes insinuations on that front.

In a startling contradiction, after spending five or six pages talking up the “complex” and “unpredictable” nature of “domestic terrorism”, they then make an incredibly specific prediction about a future “domestic terrorist attack”:

Taken from the “Assessment of the Domestic Violent Extremism Threat” (p. 10):

Newer sociopolitical developments–such as narratives of fraud in the recent general election, the emboldening impact of the violent breach of the U.S. Capitol, conditions related to the COVID–19 pandemic, and conspiracy theories promoting violence–will almost certainly spur some DVEs to try to engage in violence this year.

Apparently, the official position of the FBI, CIA, NSA and DHS is that domestic terrorism is a vast cloud of mystery, swirling with unknown and conflicting motivations….but they definitely know when the next attack will happen, and why it will take place..

SO WHAT’S TO BLAME?

The evil “domestic terrorists” and “violent extremists” might be widely diverse in their ideologies, social structures, motives and political leanings…but nevertheless, they ALL use the same exact methods of communication, and the same platforms to host their “misinformation”.

It turns out, according to this strategy, there’s really only one thing at the root of all “domestic terrorism”: The internet.

Yes, the vast majority of this “strategy” is focused on the digital world. In only 28 pages of text the words “online”, “social media”, “internet”, “platform”, “encryption”, and “site” occur well over 60 times combined. Here’s some examples:

It goes on, and on and on in that fashion.

As much as the Deep State talks up the supposedly unknowable nature of “domestic terrorism” early on, they are equally sure that every single one of them is on the net. Which, fortunately from the state’s point of view, means they can all be tackled with the same solution.

WHAT THEY’RE GONNA DO ABOUT IT

You probably don’t need me to tell you what the supposed “solution” to this entirely created “problem” is. It’s the same grab-bag of solutions that a power-hungry state will always seek, given the opportunity. Yes, there’s a token reference to guns and “high-capacity” magazines, but really it’s all about controlling the internet.

Specifically – it’s about surveillance, censorship, and propaganda. The big three.

Of course, the document never ever uses those words. Surveillance is “information gathering”. Propaganda is “messaging” or “education”. Censorship is “countering propaganda” or “working with media partners to remove incitement of violence”.

They use the shifting, indirect language of government, but the meaning is clear if you know how to read it:

…the Department of Homeland Security and others are either currently funding and implementing or planning evidence–based digital programming, including enhancing media literacy and critical thinking skills, as a mechanism for strengthening user resilience to disinformation and misinformation online for domestic audiences. The Department of State and United States Agency for International Development are doing similar work globally.

Translation: The DHS is funding massive propaganda campaigns designed to both brainwash the public, and discourage them from reading any sources which disagree with the official line.

The Department of Homeland Security has expanded its efforts to provide financial, educational, and technical assistance to those well placed to recognize and address possible domestic terrorism recruitment and mobilization to violence and will ensure that its counter–domestic terrorism prevention efforts are driven by data and informed by community–based partners.

Translation: DHS is working with social media monopolies to censor certain people, and paying them to pass citizens’ private information to the government and/or intelligence agencies.

Enhancing faith in American democracy demands accelerating work to contend with an information environment that challenges healthy democratic discourse. We will work toward finding ways to counter the influence and impact of dangerous conspiracy theories that can provide a gateway to terrorist violence.

Translation: “Enhancing faith in democracy” means censoring anybody who posts evidence that elections are fixed, that the political class is corrupt or that the media are servants of the state who peddle lies for cash.

And then there are some phrases that need no translation at all:

the Department of Justice is examining carefully what new authorities might be necessary and appropriate.

THE NATURE OF “VIOLENCE”

Time to address the elephant in the room: “violence”. The word is used a lot in the report. One-hundred and eleven times in 28 pages. It’s never just “extremism” when it can be “violent extremism”. But what does that word really mean in this context?

The answer to that is “absolutely nothing”. It is a phrase robbed of meaning. Applied on an ad hoc basis, based on political convenience rather than physical reality.

A reminder that this is described as “violent extremism”: 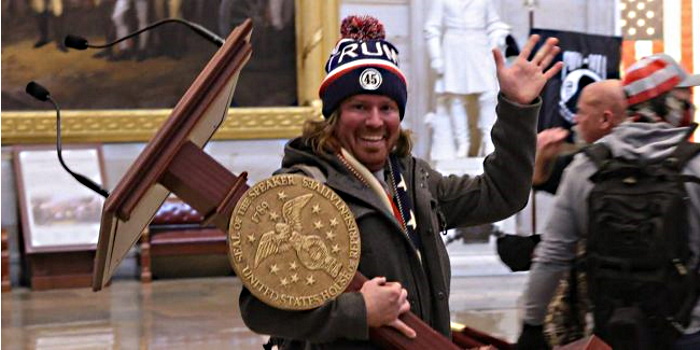 And this as “mostly peaceful”: 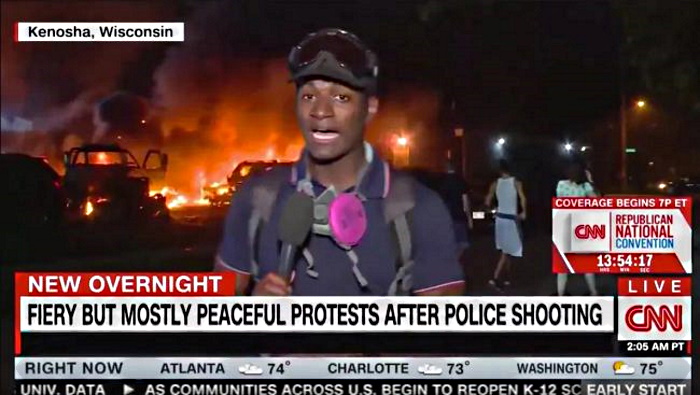 And this is “inciting violence”:

If the President of the United States can be deleted from the internet, impeached and tried before the Senate because “go home in peace and love” and “stay peaceful” are “inciting violence”, then the word is totally meaningless and we should simply ignore it.

Essentially, they have demonstrated they will classify anything they want as violent, and ignore any actual violence if they need to.

THE ROLE OF IDENTITY POLITICS

I doubt any White House policy announcement has ever leaned so heavily into the politics of identity before now. “Hatred”, “bigotry”, “LGBTQI+” “racism”…and so on. They all get a lot of mentions. But why?

Well, the simple answer is camouflage. Generally, by draping the inevitable Patriot Act 2.0 in the language of identity, they can trick “liberals” into believing it’s some kind of progressive policy.

More specifically, they can align “anti-government” with “white-supremacy”, as if they are always the same. In this sentence for example:

Today’s domestic terrorists espouse a range of violent ideological motivations, including racial or ethnic bigotry and hatred as well as anti–government or anti–authority sentiment…

General Mark Miley recently testified in front of the senate about how the need to “understand white rage”.

As Glen Greenwald wrote, this is not about racism, but about aligning the “progressive left” with the military. Turning militaristic, totalitarian Imperialism into a progressive cause, whilst smearing all those who oppose it as bigots and potential “domestic terrorists”.

This strategy is just the latest domino put in place. It’s a long con, with multiple moving pieces, but the end is clear. Though this document is deliberaletely cagy about the possibility of new legislation, that is all part of the dance.

The manipulation of the public has been government practice since the dawn of time. The contrived public reticence to act, concealing intrigues behind the scenes which create an apparent need for action. Eventually, the public will beg the state to “do something”, and they’ll unveil the something they were planning the whole time. Tale as old as time. True as it can be.

This is no different.

Only last night, the US Senate voted to create a “select committee” investigating the Capitol Hill riot. This political pantomime will roll on for a few weeks with “shocking testimony” from FBI agents and military intelligence operatives.

They will detail how “misinformation radicalised people online”, alongside admitting they “had knowledge, but lacked the power to act” or that “counter-terrorism forces were focused on foreign groups” and/or lacked “legal authority” to surveil domestic threats. There will be a couple of throwaway admissions, something akin to a “failure of imagination”.

Senators from liberal states will make speeches about how the military/CIA/FBI are institutionally racist because they assumed white people can’t be terrorists, and a few willing uniformed fall guys will look appropriately shame-faced behind their medals.

There will be no real inquest, and no new information. It will be an exercise in reinforcing an entirely fake reality. And the final findings will be that the FBI/CIA/NSA…or whoever…needs more money and power. A new bill (likely already written) will be pushed into the hands of some hip “liberal” politician, who will do a decent job pretending they wrote it.

If there is any noteworthy public objection to the new powers, well then we’ll see another “domestic terrorist” attack. Maybe there’ll be one anyway, just to underline how vital the new bill is. (They’re prepping us already, with the DHS warning about attacks on July 4th and a possible “summer of violence”).

And then, stirring itself to act only at the insistence of the Democrat-controlled Senate, the White House will sign-off on its Patriot Act 2.0.

The final paragraph of the strategy document reads:

This document represents that Strategy – a Strategy whose implementation is, already, well underway.

Connect with Kit Knightly at OffGuardian