You’ll recall that back in April of this year I examined the question of whether or not there was foreknowledge of the plandemic. Specifically, that episode of Questions For Corbett looked at:

and several other signs that those in positions of power knew that 2020 was going to be the year of COVID.

But April seems like an eternity ago and many more pieces of suspiciously predictive activities been dug up in the meantime.

So, in the interest of continuing this exploration, let’s examine 10 more signs of plandemic foreknowledge.

In 2019 the US Department of Health and Human Services (HHS) held a pandemic exercise called Crimson Contagion, which, the mainstream press notes, was “eerily similar” to the current scamdemic. The exercise scenario envisioned a novel strain of pandemic influenza originating in China and being brought back to the US by international tourists.

So why did the exercise make it into the mainstream press at all? Because Orange Man Bad, of course. More specifically, because it provides the “Bin Ladin Determined to Strike in US” cover story for this neo-9/11, subtly reinforcing the narrative by suggesting that COVID-19 is a real and existential threat to the US and that the valiant leadership of the HHS tried to warn the White House about PPE shortages and other preparedness shortcomings.

Extra points if you recognize this drill from my coverage of it in COVID-911: From Homeland Security to Biosecurity.

Canada’s international alert system for disease outbreaks—the Global Public Health Intelligence Network, or GPHIN, which, The Globe and Mail helpfully informs us, is “highly regarded”—was “silenced” by the Canadian government in early 2019. And we all know what happened at the end of 2019.

This story once again serves to bolster the mainstream narrative by portraying the novel coronavirus as a real and existential threat that could have been prevented if only the government had plowed more money into its public health department and paid more attention to the epidemiologists (who, as we have seen this year, never get anything wrong).

The Global Preparedness Monitoring Board is a body convened by the World Bank and the World Health Organization (WHO) that seeks to “ensure preparedness for global health crises.”  In their 2019 “Annual report on global preparedness for health emergencies” they warned, a propos of absolutely nothing, of the “very real threat of a rapidly moving, highly lethal pandemic of a respiratory pathogen killing 50 to 80 million people and wiping out nearly 5% of the world’s economy.”

They also set a number of goals for 2020, including:

The United Nations (including WHO) conducts at least two system-wide training and simulation exercises, including one for covering the deliberate release of a lethal respiratory pathogen.

But don’t worry, guys! That’s just a “simulation,” and we all know that drills never go live.

Last June, Dr. Michael Ryan—the executive director of the WHO’s health emergencies programme—told BBC News that “We are entering a very new phase of high impact epidemics and this isn’t just Ebola.” In case you didn’t get the warning, he added: “This is a new normal, I don’t expect the frequency of these events to reduce.”

Look out, folks, we’ve got a regular Nostradamus here.

Dr. Ryan, it should be noted, is the same WHO official who announced that the “new normal” of the COVID-19 era involves governments forcibly removing those suspected of infection from their homes and separating them from their families. Oddly, he forgot to mention that part when speaking to the BBC last year.

This one has to be seen to be believed: 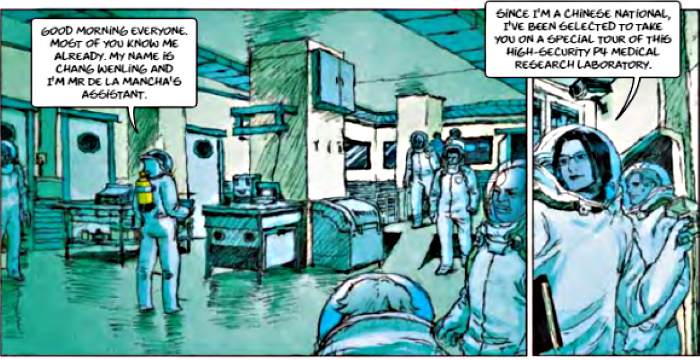 What you are looking at is a page from Infected, a comic book published by the EU Publications Office in 2012.

No, you read that right. A comic book published by the EU Publications Office.

And what’s the story of this comic book adventure?

During a tour of a P4 biosecurity lab in China, a time traveler from the year 2111 arrives to warn the assembled scientists that, in the future, a pandemic will ravage the planet. In order to prevent the calamity, the time traveler provides the scientists with a some vials of biological material that he says will be necessary to “nip any pandemic in the bud.”

Terrorists try to steal the material *blah blah blah* man scratched by a monkey *yadda yadda* global infectious outbreak *etc., etc.* and then . . . (you guessed it!) . . . the EU saves the day through an unprecedented global health campaign dubbed “The Way Forward.” 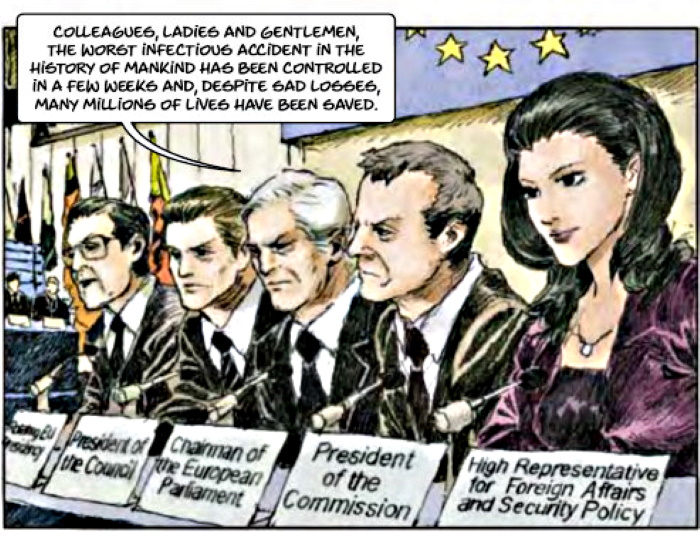 Yes, luckily for humanity, the EU-led “one health” approach saved us all from this “new era” of zoonotic pandemic outbreaks that we have just entered.

Personally, if I were a citizen of the EU I’d be upset that some portion of my taxes go toward paying for the production of propaganda schlock like this. After all, these are the same people who produced the dumbest propaganda video ever.

Oh, and just for the record, although the imaginary P4 lab in the comic is said to be in “Beijing,” China’s first (and only) P4 lab is in fact in Wuhan.

The World Bank runs a website called the World Integrated Trade Solution (WITS) that tracks global trade data by product using their “Harmonized System” (HS) tracking codes. On September 4, 2020, they posted data on COVID-19 test kits that raised some eyebrows. You see, the website indicated that these COVID-19 test kits were being sold as far back as 2017!

Proof positive that the whole thing was planned years in advance, right?

A cursory glance at the data would give even the most credulous truther pause for thought about the significance of this “find.” If we were to take this posting at face value, then we have to believe that not only were 58 separate countries producing and exporting these COVID-19 test kits (meaning that tens of thousands of people would have been involved in their production, sale, shipping and storage), but that countries like Switzerland were producing over 2,000,000 kg worth of these kits (valued at a cool $23 billion) without a single person anywhere in this supply chain asking, “What’s COVID-19, anyway?” and not a single person coming out afterward to say, “You know, I thought it was odd that we were exporting billions of dollars worth of these COVID-19 test kits, but it was even weirder when COVID-19 was identified and named three years later.”

Or, you know, the test kits were general medical test kits that were relabeled for COVID-19 use in April of this year and retroactively relabeled in the WITS system. Because that’s exactly what the fact checkers are saying.

And you know what? I believe them. (“Oooooooh, I just knew James was a globalist shill!” jeers the crowd.)

The World Customs Organization even announced the reclassification in April of this year.

This is another example of how poorly researched information gets passed around online so that the fact checkers can arrive on their white horses and save the day by dispelling the obvious misinformation (Gates and the God gene vaccine at the CIA, anyone?).

So I don’t consider this one plandemic foreknowledge at all, but thought I would throw it in to put the debunking on record.

7) A White House Advisory Group Published a Report on How a Pandemic Would Ravage the Economy . . . Last September

In September 2019 the White House’s Council of Ecnomic Advisors published a report on “Mitigating the Impact of Pandemic Influenza through Vaccine Innovation.” The report warned of “the potentially large health and economic losses in the United States associated with influenza pandemics,” estimating that such a pandemic would cause “from $413 billion to $3.79 trillion” worth of damage to the economy. And, as the title suggests, it argues that “[n]ewer technologies, like cell-based or recombinant vaccines” could help drastically mitigate that damage.

Unsurprisingly, the usual MSM presstitutes used the story to reinforce the narrative that pandemic diseases are the new normal, that the US is woefully unprepared to fight the war on the invisible enemy, and that investment in novel vaccine technologies can help save the country from economic ruination.

You might remember back in 2013 when Germany’s Bundesbank issue a remarkable statement announcing that they would repatriate 674 tons of their gold holding from the New York Fed. You may even remember that they specifically set a 2020 deadline for that repatriation.

All of these pieces of evidence led analysts like Ronan Manly to predict that 2020 would be the year of the great “system reset,” a transformation of the world financial system that would ultimately be used to usher in a new international monetary order.

This has nothing to do with a pandemic, of course, but then again, neither does the financial crisis we’re living through. The truth is that the current financial meltdown has been gathering steam for years and was well underway for at least a year prior to any of this COVID-19 hysteria. “Following the money” to track down the real perpetrators of this crime seems as good advice for would-be scamdemic investigators as it is for 9/11 investigators.

As you can see, there were many different warnings that a pandemic emergency was set to take place this year. As you can also see, there is no “smoking gun” that proves anything specific about COVID-19. Even worse, many of these “warnings” actually serve to bolster the narrative that this scamdemic really is an emergency—one that we could have prevented if only we’d thrown more money at big pharma and given more power to the public health technocrats.

But such is the nature of these large-scale events. Amateur sleuthers get caught up searching for the single, undeniable “smoking gun” and lose sight of the bigger picture.

The bigger picture here is that—exactly as I have demonstrated in my work on Medical Martial Law and Medical Martial Law 2020 and COVID-911—the groundwork for the emergence of the biosecurity state has been carefully laid over the course of the past two decades (at least). From the passage of emergency health legislation to the creation of new pandemic preparedness offices to the signing of international health treaties, this medical martial law infrastructure has ensured that—regardless of whether it is real or fake, planned or unplanned—any public health crisis could be used as the trigger for the beginning of the biosecurity era.

By all means, keep looking for that smoking gun (and, if you happen to find it, let me know in the comments below). But unless we discuss What No One Is Saying About the Corona Crisis and address the root of this new biosecurity paradigm, the bioterrorists will get away with their scam.

This weekly editorial is part of The Corbett Report Subscriber newsletter.

[Leave comments and connect with James Corbett at the original article on Minds.com or at The Corbett Report.]