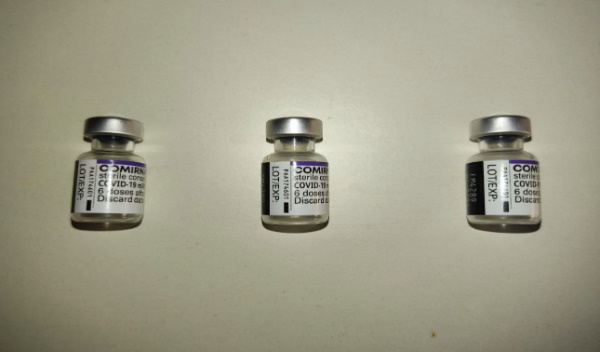 As announced at the time, La Quinta Columna has shared a report on their finding of graphene-like objects, self-assemblies, and microtechnology in 3 Pfizer vaccination vials.

Biostatistician Ricardo Delgado has announced that his team will soon have the report available in several languages for subsequent dissemination in different countries.

Below, Orwell City brings to English the important information given by the Spanish researchers.

Good evening, everyone. La Quinta Columna has issued a report entitled “Identification of possible micro-technology and artificial patterns in Pfizer vaccines with optical microscopy,” which you can download just below this video. And in which we collect the results of the optical microscopy analysis and photographic report of what was recently observed in the Pfizer vials.The report is supported by links to the scientific literature related to the research and object of study. It’s further divided into three parts:

In this report, we draw a series of final conclusions. And we also encourage the scientific and independent community to make similar observations, following the guidelines set out in this study.The file is in PDF format and is digitally signed. We consider the images to be particularly neat and clear. And we demand an explanation from the health and medical community that has been, and still, administering this target product to our civil society. As well as from the European Medicines Agency itself and other regulatory bodies.The report will be per the previous complaints presented with the preliminary report by Dr. Campra, dated June 2021, and the final technical report, also by Dr. Campra, dated November of the same year. La Quinta Columna asks our subscribers to spread the word.Soon, the report will be translated into other languages so that it becomes known and studied in other countries. Thank you all for your attention.

Orwellito is the creator of Orwell City, a website dedicated to gathering important information from La Quinta Columna scientists and other Spanish-speaking researchers who are working to reveal the truth about the so-called covid pandemic and other global medical deceptions.

Orwell City shares this work with the English-speaking world by offering summaries, transcriptions and subtitles for videos.