This week’s number of reported adverse events among all age groups following COVID vaccines surpassed 350,000, according to data released today by the Centers for Disease Control and Prevention (CDC). The data comes directly from reports submitted to the Vaccine Adverse Event Reporting System (VAERS).

Every Friday, VAERS makes public all vaccine injury reports received as of a specified date, usually about a week prior to the release date. Data released today show that between Dec. 14, 2020 and June 11, 2021, a total of 358,379 total adverse events were reported to VAERS, including 5,993 deaths — an increase of 105 deaths over the previous week. There were 29,871 serious injury reports, up 1,430 compared with last week. 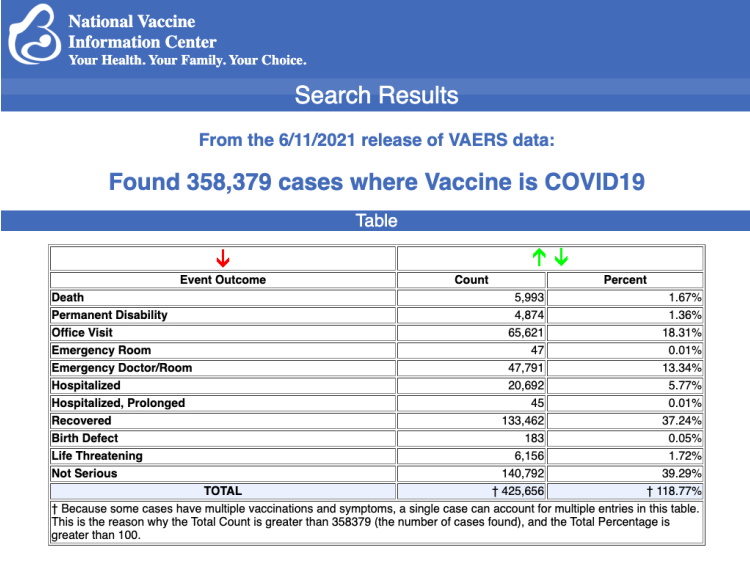 The meeting will now be held during a regularly scheduled ACIP meeting on June 23 – 25.

The emergency meeting was announced last week after the CDC acknowledged a higher-than-expected number of reports of heart inflammation in young people after they received a Pfizer or Moderna vaccine.

The CDC on June 10 said it was aware of a total of 475 cases of myocarditis or pericarditis in patients 30 and younger. The disclosure was made during a U.S. Food and Drug Administration (FDA) hearing to consider what data the agency would need in order to extend Emergency Use Authorization of COVID vaccines for children under 12.

A search of the latest available data in VAERS revealed 1,117 cases of myocarditis and pericarditis, among all age groups reported in the U.S following COVID vaccination between Dec.14, 2020 and June 11, 2021. Of the 900 cases reported, 686 cases were attributed to Pfizer, 391 cases to Moderna and 36 cases to J&J’s COVID vaccine.

This week, The Defender reported on two cases of young people who developed heart complications after being vaccinated with the Moderna COVID vaccine, including a 19-year-old college freshman who died, and a 21-year-old student who is recovering.

On June 15, The Defender reported that Simone Scott, a 19-year-old freshman at Northwestern University, died of complications from a heart transplant she underwent after developing what her doctors believe was myocarditis following her second dose of the Moderna COVID vaccine.

Scott received the second dose on May 1, and on May 11, visited a doctor on campus because she wasn’t feeling well. On May 16, she texted her father complaining of dizziness and fatigue. He called campus police who, when they checked in on her, had to administer CPR.

After multiple interventions, including hooking Scott to an ECMO machine that mirrors the function of the heart so her own heart could rest, doctors determined she needed a heart replacement. She died June 11.

Scott’s mother told local media, “I still feel like she’s here, even though I know she’s not and it just feels like such a waste.”

Scott’s  doctors have not fully confirmed the cause of her death, but they said it appears she suffered from myocarditis.

On June 15, The Defender reported that a 21-year-old New Jersey student suffered severe heart inflammation after receiving his second dose of Moderna’s COVID vaccine. Justin Harrington, whose school required him to get the vaccine in order to attend classes in the fall, experienced flu-like symptoms followed by heart pain within eight to 12 hours of receiving the vaccine.

In an exclusive interview with The Defender, Justin’s father, Timothy Harrington, said his son felt different after the second shot. Every time his heart beat it hurt and he felt pressure,” Harrington said. “Then he developed heart pain down both arms.”

Harrington said his son, who has no underlying medical conditions, did not experience heart pain with his first dose of the vaccine. Although Justin has since been released from the hospital, he has to wear a heart monitor and take four different medications for six months, has to sleep propped up, can’t exert himself and he’s missing out on one of the most important times of his life, his father said.

As for Justin’s recovery, Harrington said, “He has minor scarring on his heart and doctors hope they caught it early enough that there will be no other issues — but it’s pure conjecture at this point.”

As The Defender reported June 14, eight people in Maine died with COVID after being fully vaccinated, according to the latest numbers from Maine’s Centers for Disease Control and Prevention (CDC), which confirmed a total of 457 breakthrough cases in the state.

Initial data suggest breakthrough cases in Maine are more common in older individuals and people with underlying health conditions — the same populations that, among the unvaccinated, are most at risk of hospitalization or death from the virus. About half of the vaccinated people in Maine who tested positive for COVID had not experienced symptoms when contacted by case investigators, according to the Maine CDC.

On June 3, Napa County California announced a fully vaccinated woman, who was more than a month past her second Moderna shot, died after being hospitalized with COVID. The 65-year-old woman had underlying conditions and tested positive for the Alpha variant.

As of June 9, the California Department of Public Health had identified more than 5,723 breakthrough COVID cases. Of the 5,723 cases, at least 417 people were hospitalized and least 47 died. Approximately 48% of cases were missing hospitalization data. It is not known if the primary cause of hospitalization or death was COVID or if there were other causes.

Other states continue to report breakthrough cases, among them Texas, which recorded  more than 768 breakthrough COVID cases through June 1, with 8% (61 cases) resulting in death.

In Washington, the state’s Department of Health reported 1,837 cases of breakthrough infection through June 9. Of those, 10% resulted in hospitalization and 31 people died from COVID-related illness. The majority of cases occurred in the 35 to 49 age group.

The CDC conservatively estimates more than a third of Americans (at least 114.6 million) have been infected with SARS-CoV-2.

As The Defender reported June 16, there is ample reason to believe that in most of these individuals, SARS-CoV-2 infection “induces long-term immunity.”

For example, a December 2020 study by Singapore researchers found neutralizing antibodies (one prong of the immune response) remained present in high concentrations for 17 years or more in individuals who recovered from the original SARS-CoV.

More recently, the World Health Organization (WHO) and the National Institutes of Health (NIH) published evidence of durable immune responses to natural infection with SARS-CoV-2.

Yet health authorities are largely ignoring this fact as they continue to push for everyone to get the vaccine. As the American Institute of Economic Research reported, it appears in order to promote the COVID vaccine agenda, key organizations are not only “downplaying” natural immunity but may be seeking to “erase” it altogether.

New Cleveland Clinic study found people who had COVID were less likely to be reinfected than fully vaccinated individuals who never had virus—suggesting vaccine is of no benefit to people who already had COVID.#TheDefender: https://t.co/zL66EdwTnDhttps://t.co/zvQMuYwHaa

On March 8, The Defender contacted the CDC with a written list of questions about reported deaths and injuries related to COVID vaccines. After repeated attempts, by phone and email, to obtain a response to our questions, a health communications specialist from the CDC’s Vaccine Task Force contacted us on March 29 — three weeks after our initial inquiry.

On May 19, a CDC employee said our questions had been reviewed and our inquiry was pending in their system, but would not provide us with a copy of the response. We were told we would be contacted by phone or email with the response.

We’ve contacted the CDC numerous times since and there is no change in the status of our questions, to re-submit our questions or to callback later. It has been 102 days since we sent our first email inquiring into VAERS data and reports and we have yet to receive a response.