Law Enforcement Across the U.S. Overwhelmingly REFUSING to Enforce COVID Orders – Will the Public Follow?

Law Enforcement Across the U.S. Overwhelmingly REFUSING to Enforce COVID Orders – Will the Public Follow? 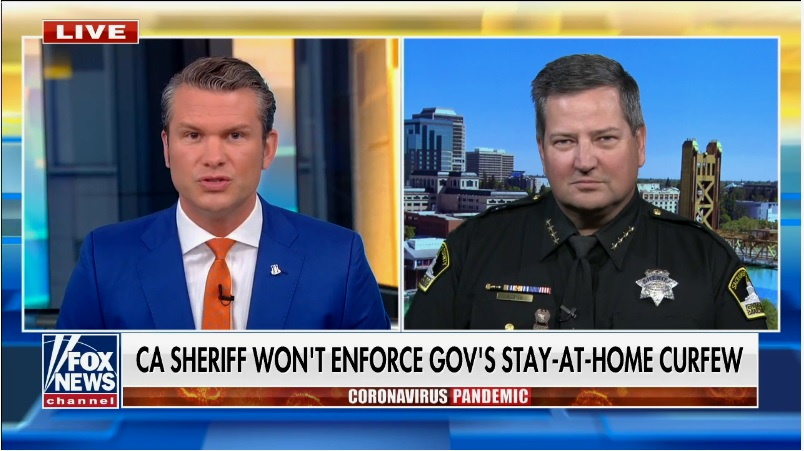 Sacramento County Sheriff Scott Jones appeared on Fox News and stated his department would not enforce the Governor’s new curfew, nor any other COVID orders from him or unelected Health Department bureaucrats. (Source.)

As literally millions of people take to the streets all across Europe to protest new COVID orders as many face a second “lockdown” this year in the name of COVID, there is growing evidence that as states in the U.S. try to order more people to obey their edicts as the U.S. also heads towards a second lockdown, that law enforcement simply is going to refuse to enforce these orders this time around.

Why? Because they are too busy enforcing real laws and chasing down real criminals, than to worry about who is in your home for Thanksgiving, or if you are walking around outside without a face mask, etc.

The vast majority of the U.S. public seems to still get their information from the corporate media controlled by the Globalists, so will enough of the public wake up to the fact that all of these COVID orders are NOT laws, and are legally unenforceable?

The American public appears to be sufficiently uneducated enough today to not even understand what a “law” is anymore. A new law is made when someone in the legislature proposes a “bill” which then must pass both houses of the legislature, which is the government body tasked with making “laws,” and then signed into law by the executive branch, either the Governor at the state level, or the President at the national level.

The executive branch can issue “orders,” but the issuance of an “order” does not automatically make it either “legal,” or “enforceable.” Not even during a “pandemic.”

Since these COVID “orders” by Governors are supposedly in the name of “emergency health orders” related to COVID, it appears that most of the country’s law enforcement agencies are waking up to the fact that these Governors just mostly want more control, especially when they themselves do not even follow their own orders, and these orders actually have little or nothing to do with “health,” and are therefore refusing to enforce them.

In New York, Governor Andrew Cuomo got upset this week because many of the State’s Sheriffs have come out and assured the public that they are not going to enforce his order that no more than 10 people can attend a Thanksgiving dinner.

New York’s governor Andrew Cuomo has warned law enforcement they have to implement his Covid restrictions over Thanksgiving.

Mr Cuomo had faced a revolt from a string of upstate sheriffs who said they would not have officers implement the rules that bans more than 10 people at family gatherings.

“I don’t believe as a law enforcement officer you get to pick and choose which laws you enforce,” said Mr Cuomo said in response to the criticism. (Source.)

Sorry Mr. Cuomo, but your “order” is not a law! And law enforcement is correct in not using their time in chasing down REAL criminals to be raiding peoples’ Thanksgiving dinner plans.

New Mexico Governor Michelle Lujan Grisham, who has made a similar order for her state, came out in public and even admitted that her order, or anybody else’s order limiting people attending Thanksgiving dinners, is not enforceable.

During an interview aired on Friday’s “PBS NewsHour,” New Mexico Gov. Michelle Lujan Grisham (D) said that “You can’t enforce” the state’s five-person family gathering limitation and no place in the nation can enforce such a rule.

“NewsHour” Senior National Correspondent Amna Nawaz asked, “You’re asking people in New Mexico to limit their gatherings to five. How do you begin to enforce that?”

Grisham responded, “So, you ask one of the most important questions. You can’t enforce that. There is no way, anywhere in the country, we’re going to be able to say, look, you brought another household together. There [were] ten of you having Thanksgiving dinner.” (Source.)

How sad that so many in the U.S. will obey these “unenforceable” orders and willingly allow their Thanksgiving plans to be ruined.

In West Virginia, Governor Jim Justice issued an “amended” order for face masks making them required even inside buildings. He threatened to close down any businesses that refuse to comply.

To the business owners, he told them to call law enforcement if their patrons did not comply with his order.

Sorry Governor! Your order is not a law, and is unenforceable.

Lawyers and the West Virginia Attorney General Patrick Morrisey opposed the governor, and so the governor backed down.

In Oregon, the Marion County Sheriff’s Office has also publicly stated that they will not enforce Governor Kate Brown’s orders after she publicly told citizens to call the police on people who were not adhering to her COVID decrees. (Source. See also: Clackamas County’s Tootie Smith doubles down on defiance of Oregon COVID-19 restrictions.)

Then there is Governor Newsom, who presides over what some people refer to as the Communist Republic of California.

Newsom has gone farther than any U.S. governor to date, imposing a state-wide curfew between 10 p.m. and 5 a.m.

And this is following days of media coverage attacking him for failing to obey his own COVID orders by wining and dining with other officials, unmasked with no social distancing, at a fancy restaurant where someone took pictures that made its way to the press. (Source.)

Just after Newsom ordered the curfew, Breitbart News reported that every single Sheriff in Southern California has publicly stated that they will NOT enforce Newsom’s curfew.

Fox News interviewed Sacramento County’s (California State Capital) Sheriff Scott Jones who stated that he also was not going to enforce the Governor’s curfew order, nor any other COVID order.

Jones explained that his department still has “the same types and amounts of calls for service as we always have” to deal with and he doesn’t want his sheriffs “to be instruments of…oppression. I want folks to call us when they need help, knowing that we are going to show up and make their lives better and make the situation better, and this is the opposite of that.”

Jones said, “Well, we won’t be enforcing that, or any of the other orders that are in existence now or might be coming. A couple of reasons for that: Really one is practical. We still have the same types and amounts of calls for service as we always have, from the mundane to the exciting.

But there’s also kind of a theoretical aspect of it. I mean, my kids, my family, my extended family are all suffering during this, like everybody’s family. And it really has had an oppressive effect on everybody’s family, and I really don’t want our women and men of the sheriff’s office to be instruments of that oppression.

I want folks to call us when they need help, knowing that we are going to show up and make their lives better and make the situation better, and this is the opposite of that.” (Source.)

This is not to say that there are no law enforcement groups, particularly city police departments who in some neighborhoods will use any means they can to control the public, especially in high crime areas, who will try to enforce these orders, like the curfews in California.

But even then, they do not have the law on their side, and these kinds of orders with no basis in the law are increasingly being defeated in court.

So what are you going to do America? The emperor has no clothes.

If you are not going to resist the wholesale destruction of America and what few freedoms we still have left, when law enforcement is overwhelmingly on your side, what are you going to do when the vaccine comes out and they try to vaccinate everyone in the nation?

Because then you will probably be dealing with the military, who are trained to fight and kill, rather than your neighborhood law enforcement officers, many of whom also have families living in your community.

There is no political solution to this problem. These orders will only get worse, and they are happening in both Blue and Red states, and it matters not who sits in the Oval Office.

Only massive resistance by the public, such as we are starting to see now in Europe, will put a stop to this madness.