We know that the anthrax attacks of 2001 were not carried out by Muslim terrorists, but what many of us may not know is that these attacks provide strong evidence that 9/11 wasn’t either.

Exposing this connection could become much easier if the Lawyers’ Committee for 9/11 Inquiry (LC911) is successful in getting the U.S. Congress to launch a new investigation into the hugely significant but often overlooked anthrax attacks.

To this end, LC911 has laid out its rationale for wanting the case reopened in a 78-page petition that was sent to Congress on October 15, 2020. The petition is accompanied by 69 exhibits. All of this material can be viewed on the LC911 website (LC911for911.org).

LC911 contends that the official narrative of the anthrax attacks is false and that it, like 9/11, involved both a cover-up of what really happened and accusations against innocent parties. 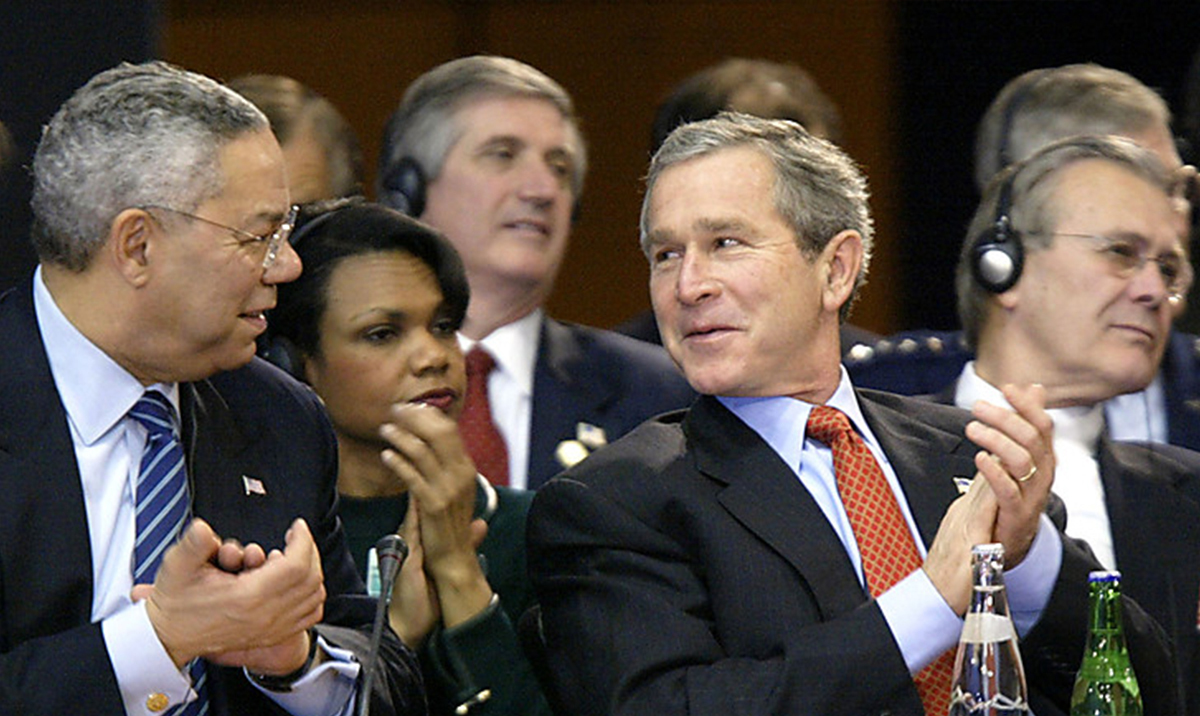 “It’s after 9/11, but we look at it as being connected,” LC911 president David Meiswinkle, who is also a member of his organization’s anthrax committee, explained in an interview. “We did anthrax in part because no one has done it. There is no Architects & Engineers [for 9/11 Truth] for anthrax.”

An essential finding of LC911’s investigation is that the man the FBI and the Department of Justice claim was the sole perpetrator of the attacks, Dr. Bruce Ivins, not only wasn’t responsible but couldn’t have been.

Ivins was a microbiologist who worked on anthrax vaccine development at the United States Army Medical Research Institute of Infectious Diseases (USAMRIID) at the Fort Detrick military base in Maryland until his apparent suicide in July 2008. It was only after his death that he was publicly named by the FBI as its primary suspect.

The first wave of letters containing dried anthrax spores was sent one week after 9/11 to a number of locations, including several media outlets. A second wave went out the following month, and these contained a much deadlier variety, with spores that are so concentrated (one trillion spores per gram) that they behaved almost like a gas, Meiswinkle explains. 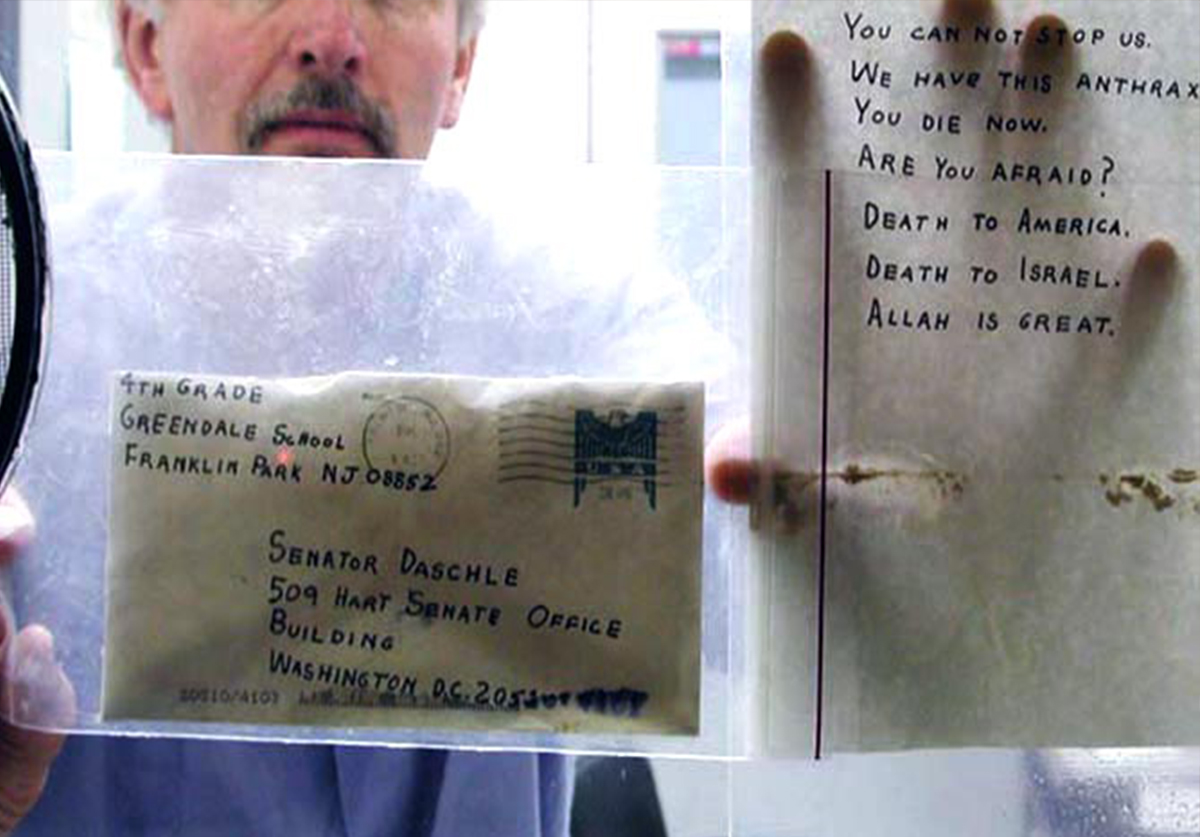 Among the targets of this second wave were U.S. senators Patrick Leahy and Tom Daschle. Both were resisting the effort to get the Patriot Act passed, and LC911 contends they were targeted to accelerate passage of the bill, something that Vice-President Dick Cheney was pushing hard for.

Five people died in the attacks, including two postal workers, and 17 were injured.

The letters themselves contained references to 9/11 and suggested that both 9/11 and the anthrax attacks were the work of Muslim terrorists. Then anthrax used was also determined to be from the Ames strain, which is known to be used by the U.S. military, although it is also held by other countries. 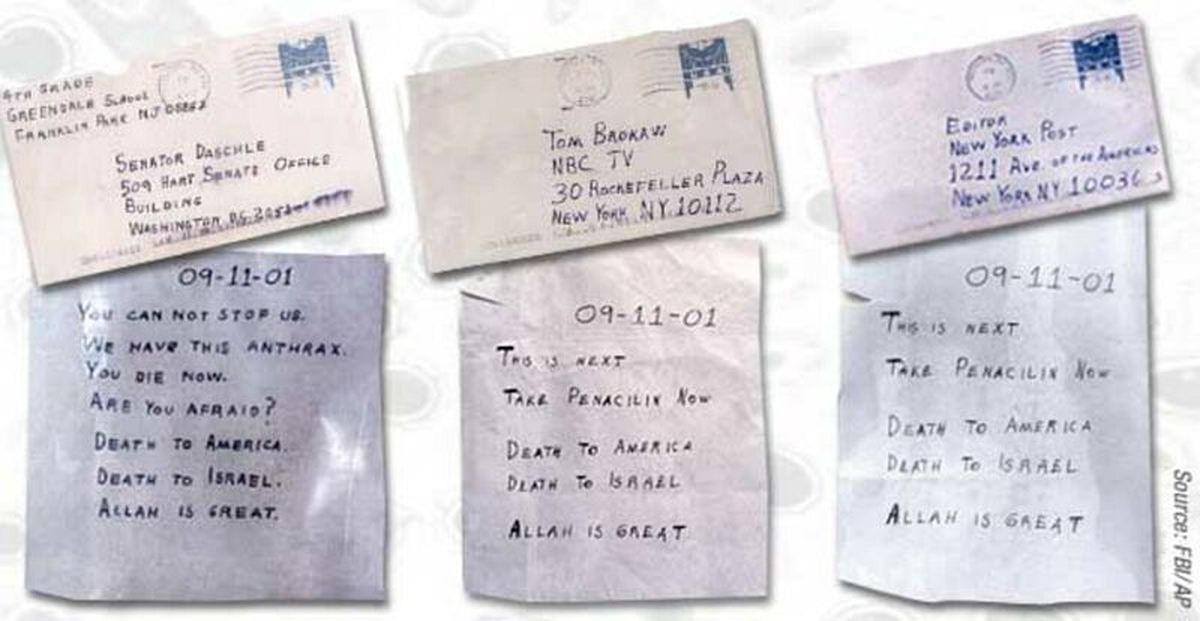 The two from the group first read:

The ones from the second group contained similar language and presentation:

09-11-01
YOU CAN NOT STOP US.
WE HAVE THIS ANTHRAX.
YOU DIE NOW.
ARE YOU AFRAID?
DEATH TO AMERICA.
DEATH TO ISRAEL.
ALLAH IS GREAT.

It is significant that, in accusing Ivins, the U.S. government was admitting that the anthrax attacks, which the letters appeared to blame on Muslim extremists, were actually most likely to have originated in a U.S. military facility.

Prominent 9/11 researcher Graeme MacQueen, also a member of LC911’s anthrax committee and author of the 2014 book The 2001 Anthrax Deception: The Case for a Domestic Conspiracy, says the fact that we know the anthrax did not come from Muslim terrorists is hugely revealing about 9/11.

“It strains credibility. It would make anyone ask, if the second one was fake then maybe the first one was too.”

MacQueen says LC911 took a different approach with its petition than he did in his book, focusing on scientific evidence that can be positively verified.

“[The book and the petition] complement each other, you could say, but they are not the same.” 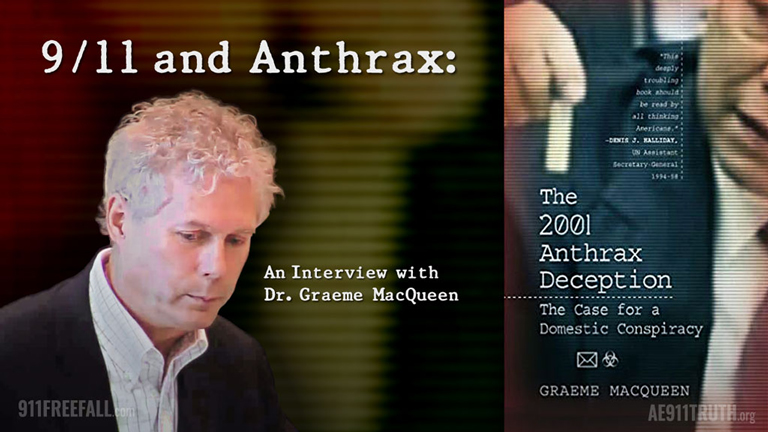 In The 2001 Anthrax Deception (chapter 7, page 134), MacQueen addresses a stunning link between the anthrax attacks and 9/11 in the form of a connection between several of the alleged 9/11 hijackers and the first person to die in the anthrax attacks.

One of the anthrax letters was sent to the now-defunct Sun newspaper in Boca Raton, Florida. The paper was owned by American Media Inc., the same company that owns the National Enquirer. Robert Stevens was a photo editor at the Sun, and he was the first to die after coming into contact with the anthrax.

Mike Irish was the paper’s editor in chief, and he had known Stevens for 25 years. Mike Irish’s wife, Gloria, was a real estate agent who helped two of the alleged hijackers (Marwan al-Shehhi and Hamza al-Ghamdi) find apartments in the summer of 2001. Each of these apartments was shared by two of the alleged “hijackers.” Al-Shehhi was said to be a close friend of alleged Flight 11 pilot Mohammed Atta, who he once stayed with in Hamburg, Germany.

In addition, Mike Irish, a licensed pilot, was a former member of the Civil Air Patrol based at the airport in Lantana, Florida. This is the same airport where Atta is supposed to have rented a plane in 2001. Stevens lived in Lantana.

The connections between Gloria Irish and the alleged hijackers were actually reported by several major media in October 2001, but this was before the anthrax attacks had come to light and before the connection to Stevens was clear. 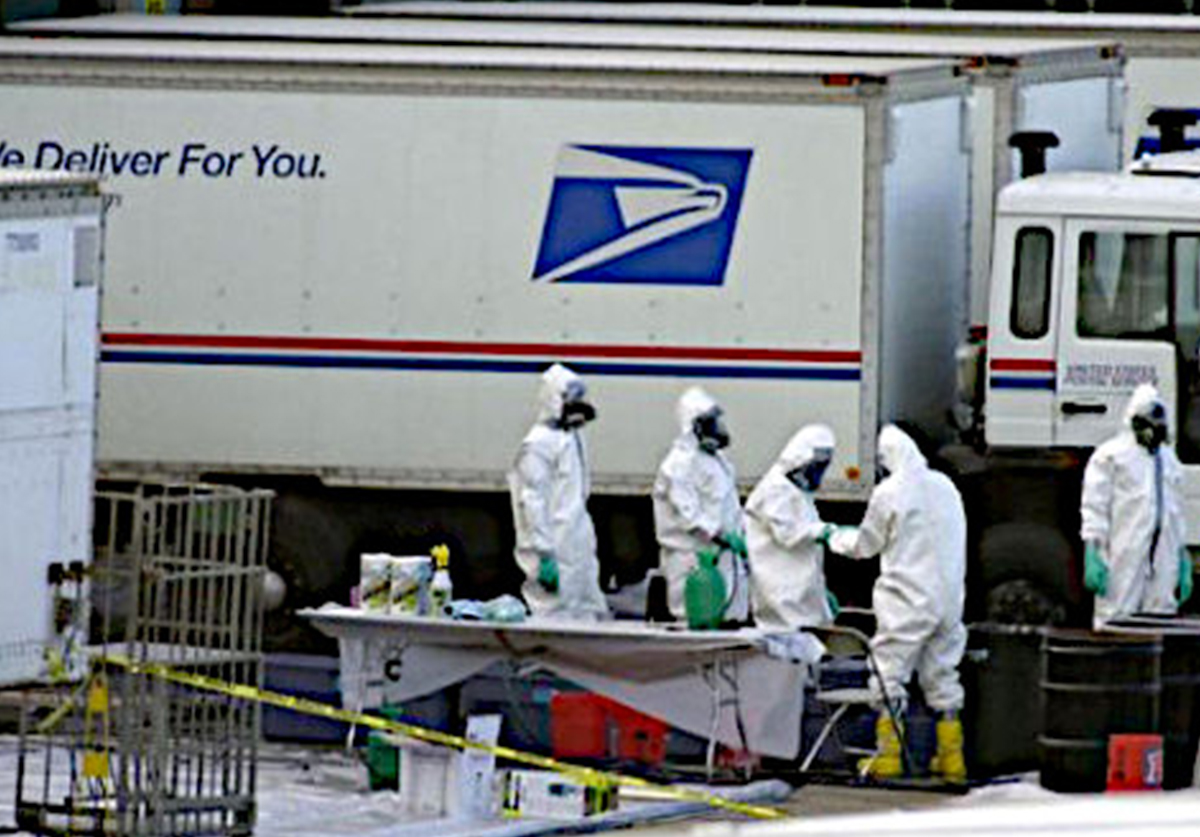 Ivins’ colleagues say he was innocent

While Bruce Ivins was publicly accused of the crime only after his apparent suicide, LC911’s research shows that the FBI had previously targeted other scientists with harassment and surveillance. All of them, Meiswinkle contends, appear to have been innocent of any involvement.

He explains that one of the ways LC911’s anthrax committee developed its bank of evidence was by connecting with four scientists who worked with Ivins at Fort Detrick. These four — two were colonels and one was a lieutenant colonel — have provided statements as well as important documents to LC911 that the public has not seen before.

The USAMRIID scientists, Meiswinkle says, “all agreed that Ivins was the patsy, basically, the fall guy. And he was innocent. They knew him. They knew he couldn’t do that, that he didn’t have the capability to do it.”

LC911 also reached out to Richard Lambert, was in charge of the FBI’s “Amerithrax” investigation from 2002–2006. Lambert, who, in a federal court complaint, detailed obstruction by his FBI superiors, told LC911 representatives he met with that they would have to get Congress to subpoena the 2,000-page report he produced for the FBI because the material is classified. While he could not divulge what is in the report, he was able to confirm that 16 of those pages contain information exonerating Ivins. 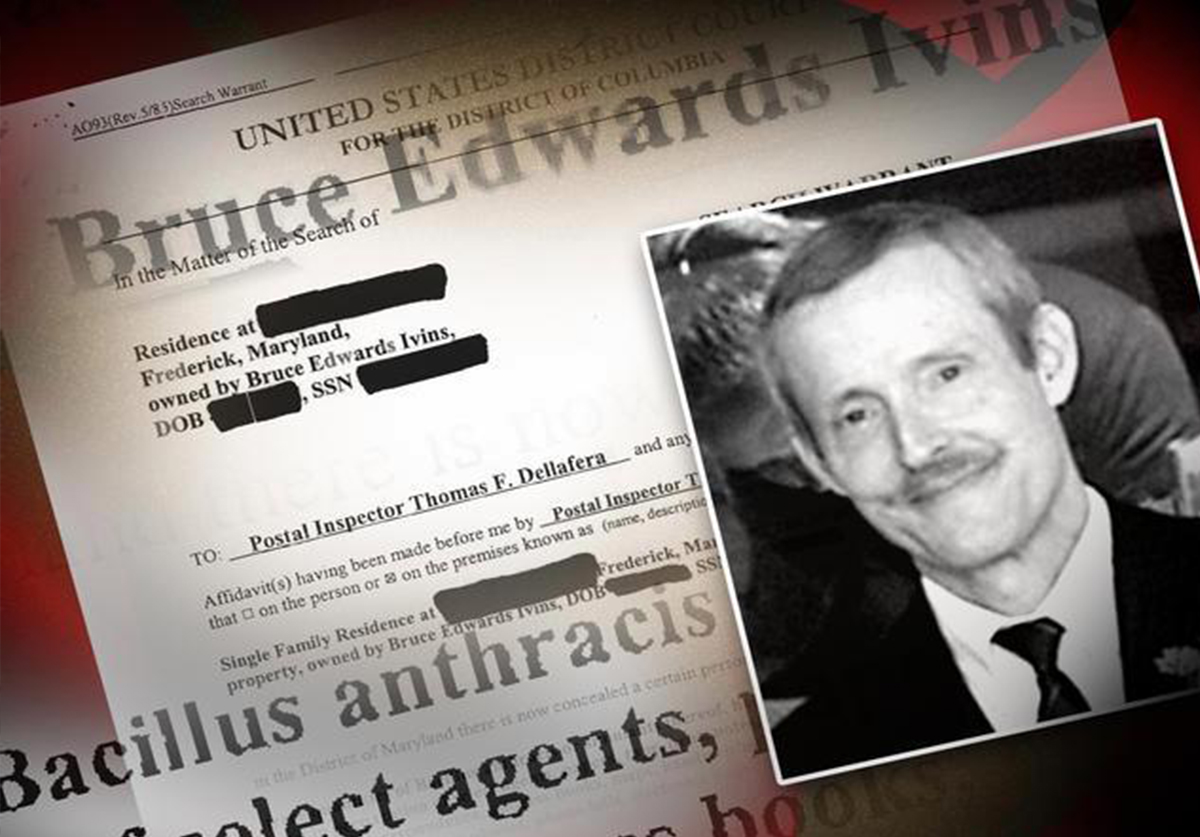 LC911 lists five primary conclusions it has reached about the anthrax attacks and the FBI investigation of the attacks in the executive summary of its petition to Congress, which states:

Anthrax committee member Dr. Meryl Nass has been an expert on the subject of anthrax and anthrax vaccines for 30 years. She took an additional interest in this case because she was friends with Ivins, who she is convinced was framed by the FBI.

“The fact that he was a friend of mine gave me a reason to pursue this all these years,” she said in an interview.

“The vast majority of the country thinks the case was never solved or that Ivins did it,” she adds. “That’s unfortunately how Americans are about many issues. They’ve been covered once with a flurry of activity and then facts come out gradually that challenge the original narrative, and people never become aware of these facts.”

She explains that not only did Ivins work exclusively with liquid anthrax — not the powdered variety used in the attacks — but the FBI could not find even a trace of either of the contaminant bacterium present in the first set of letters nor the silicon signature found in the second used in the attacks in Ivins’ Fort Detrick workplace. She says it would be impossible to remove such traces, if they existed.

“The FBI had fumbled along building a case against one perpetrator after another,” she says. “And they went from one person to another with no direct evidence for any of them.”

Nass says she learned from the Fort Detrick scientists that Ivins’ apparent suicide made him an easy and convenient “culprit” for the FBI to settle on.

“I learned basically that the FBI had been harassing several of them,” she says, “and that they felt there had been several people that the crime could have been pinned on, and that Bruce was the first one to break and to commit suicide, and that gave the FBI their man.”

The pressure on Ivins during this period was enormous, she adds.

“You take someone who is frail emotionally, and you pound on them for a year. You tell them you are about to accuse them of multiple murders and that you have the powers of the federal government to pin this on them.”

The FBI commissioned the National Academy of Science’s National Research Council (NRC) to assess the scientific basis for its conclusion that Ivins was the guilty party. The NRC’s 2011 report fell short of supporting the FBI’s claim that it had conclusively proven Ivins’ guilt, however.

The FBI claimed it had conclusively proven that the anthrax batch Ivins was working with at Fort Detrick, known as RMR-1029, was where the spores used in the attacks had come from. The NRC report contradicted this claim, stating that while the anthrax spores used in the attacks were “consistent with” spores Ivins worked with, there was no proof that they were the same.

Nass says that since 2001, biological warfare research has hugely expanded around the world.

“The preponderance of this massive bio-defense infrastructure that has developed in the United State, China, and elsewhere is, to a great extent, a consequence of the anthrax letters.”

LC911 board member and 9/11 researcher Barbara Honegger — who chronicled the connections between the anthrax attacks and 9/11 in a 2008 article — appeared at AE911Truth’s “Justice Rising: 9/11 in 2020” conference last September (along with fellow board members Meiswinkle and Mick Harrison) — to discuss LC911’s anthrax work.

During her talk, she said the attacks could offer the breakthrough needed to expose the 9/11 deception.

“… the government first wanted you to believe that it was a foreign organization, al-Qaeda, that was behind the anthrax attacks but only long enough to get their Patriot Act rushed through Congress,” she said, “Then and now they want you to believe that 9/11 and the anthrax attacks are completely unrelated, that a lone nut terrorist named Bruce Ivins did the entire thing himself.”

She suggests that the lie that Ivins was responsible is being used by the government to hide the fact that the same “domestic terrorists” — or at least some of the same ones — that were responsible for 9/11 also pulled off the anthrax attacks.

Meiswinkle says the goal is ultimately to get the evidence in front of a grand jury. LC911 has already submitted a grand jury petition concerning the World Trade Center evidence and plans to address both the Pentagon and Shanksville elements of 9/11 in the months ahead. It is also considering focusing on government obstruction, which he says is present in both 9/11 and the anthrax attacks.

If successful in getting Congress to investigate the anthrax attacks, LC911 could not only exonerate an innocent man, but it could open the eyes of many to the fact that these lesser-understood attacks provide powerful insights into the truth about 9/11 itself.