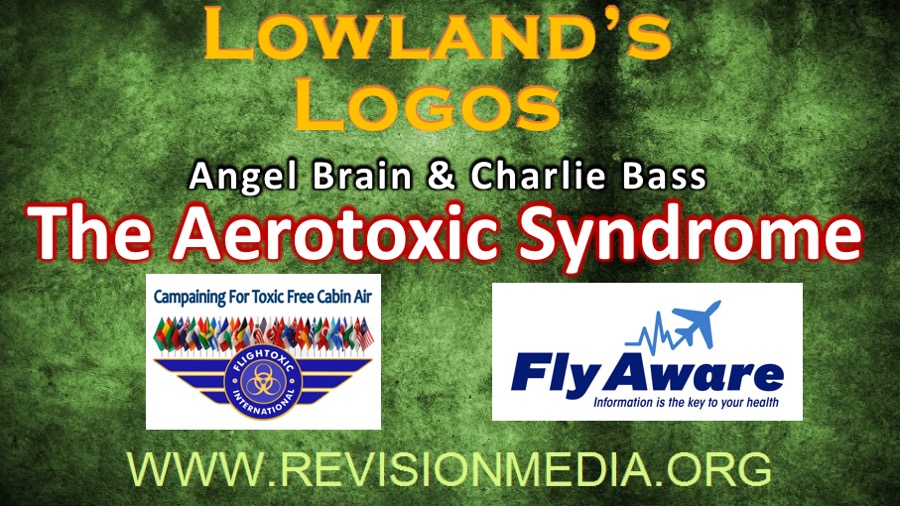 The subject of Aerotoxic Syndrome we are going to discuss today has been the starting point for me to start my activism. It was driven by a deep feeling of betrayal which is for most of us the drive to step up the plate and say NO enough of this. This feeling of betrayal serves as the necessary trigger to come into action whatever the cause might be.

Most people who work in aviation do their job because they love what they are doing, their dedication for the job comes from the heart. Maybe therefore many people who are affected by the exposure to neurotoxins in the contaminated air they breath in while performing their beloved job choose to ignore this unpleasant reality. Maybe it is the love for their job that has made them more attached to it which made it more difficult to speak out against this insidious corporate crime.

What is Aerotoxic Syndrome?

A supply of pressurized air is required by humans to sustain life at high altitude. This air is supplied direct from the compressor section of the jet engine and is known as ‘bleed air‘. Unfiltered bleed air is mixed inside the aircraft with recirculated cabin air at a ratio of 50/50. Although the recirculated is subsequently filtered, all of the bleed air which originates from the jet engines is unfiltered. Jet engines operate at higher temperatures and therefore use synthetic chemicals as oils. “Wet seals” are used to keep the oil and bleed air apart, but there seals are designed to leak, which allows small amounts of oil to be detected in the bleed air. Furthermore seals, like any mechanical component, slowly wear out and their efficiency then gradually declines, thus allowing more and more oil into both the cockpit and cabin air. 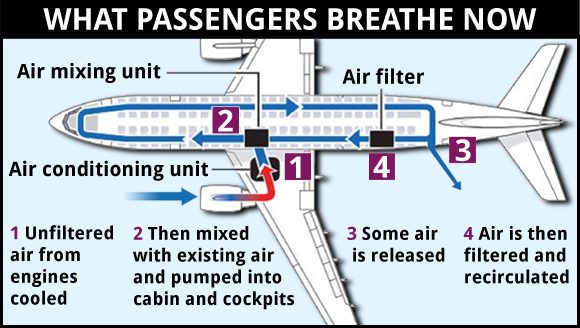 The seals can also suddenly fail resulting in visible fumes and/or smoke entering the cockpit and cabin – this is known as an ‘oil fume event’, but recently termed an ‘odour event’ by the authorities and manufacturers who are eager to distract attention from a fundamental design flaw. The engine oil contains 3-5% organophosphate additives as anti-wear agents. The oil becomes partially decomposed, i.e. chemically altered (‘pyrolysed’) due to the extremely high temperatures in the jet engine.

Exposure to contaminated cabin air effects individuals in different ways with both short and long term ill health, based on many factors:- levels and types of toxic chemicals present during an oil fume event (which may be visible or invisible) and occur on any flight, previous exposure history to contaminated air, genetic make-up, age, medical condition and potentially any medication being taken.

Those who have been subject to toxic oil exposure normally complain of headaches, breathing difficulties, muscle aching and exhaustion. Those who suffer full Aerotoxic Syndrome Symptoms where repeated exposures of toxic chemicals attack the central nervous system (CNS) which controls all of the major organs in the body – symptoms are mainly neurological but are many and varied. Aerotoxic Syndrome is frequently misdiagnosed and mistreated by doctors unfamiliar with a hidden cause of poisoning and then mistreated with anti-depressants and other drugs.

Today I am joined by 2 special guests Angel Brain and Charlie Bass who are both affected by, and active in the Aerotoxic arena.

Angel Brain is a former senior air stewardess in service with Gulf Air, Bahrain from 1993-1995. She was grounded and forced to resign in 1995, due to unexplained ill health. With no explanations from her employer Gulf Air, as to what had caused this serious ill health. This led to her search for the answers and her voluntary involvement in helping to expose the truth, that has been concealed by the airline industry for over six decades. Angel is the British protagonist featured in the award winning and most controversial documentary ‘Unfiltered breathed In -The Truth about Aerotoxic Syndrome’. Angel is also the foundress of Flightoxic International which is part of the global campaign for the recognition of Aerotoxic  Syndrome to be registered as an occupational hazard and environmental disease. The aim and the on-going campaign’s goal is to raise public awareness, as well as provide information and assistance for air passengers and aircrew who have been affected by Aerotoxic syndrome.

Charlie Bass has 15 years’ experience as an aircraft engineer in the Royal Navy Fleet Air Arm, so he has a full understanding of aircraft operational systems.

Charlie is fully qualified in nuclear, biological and chemical defense, biological nerve agents, and their effects on the human body.

Appointed by a Secretary of State in the UK to the OFCOM advisory council which is the independent body overseeing the activities of the UK’s communications regulator. He is offering first hand experience as to how an industry regulator, the industry it regulates and government operate/collude for mutual benefit, which reflects exactly what is happening today within the aviation sector and the Civil Aviation Authority (CAA)/European Aviation Safety Agency (EASA) governments and airlines.

Following the death of his son, British Airways aircrew Matthew Bass in January 2014, Charlie has been actively campaigning on the toxic cabin air front, spending four years in a legal process with Matt’s coroners hearing, which acted as the catalyst for Unite the Union based in the UK which Matt was a member of, to take up Matt’s case and 120 other case by those affected by contaminated air. Taking the airlines and CAA to court, this is in progress now.

I want to dedicate this show to Matt Bass, Richard Westgate and all fellow airline crew members who paid the ultimate price for doing what they loved to do most but were affected by the willful exposure of neuro and carcinogenic toxic compounds in the contaminated air that is still present in aviation today as we speak.