Home / Covid-19 Vaccines, PCR Tests & Masks / More Than Half of Army Reservists Have Not Received Even a Single Covid Vaccine Dose

And Unvaccinated Reservists Face No Discipline Until Next July, Far Later Than Employees of Private Companies

The Biden Administration appears to be pressing vaccine mandates on private companies far harder than its own armed services.

The majority of soldiers and civilians in the Army Reserve have not received any Covid-19 vaccinations, according to reserve’s own internal data.

As of Sept. 20, fewer than 35 percent of the 183,000 members of the reserve were fully vaccinated, according to a screenshot with details of Covid vaccinations by unit. Another 4 percent had received a single dose, while 2 percent – about 4,000 people – had already received vaccine exemptions.

In several large units, not even one out of four people was fully vaccinated. The 412th Theater Engineer Command, headquartered in Mississippi, had the lowest vaccination rate of all, under 20 percent.

The Army Reserve has set a deadline of June 30, 2022 for vaccinations for its force – more than six months later than most private companies that have imposed vaccine mandates on their employees.

The active-duty Army has set a deadline of Dec. 15, again later than many private companies.

The screenshot also reveals very large discrepancies in the number of vaccine exemptions granted. In some units, such as the legal command, no one has received an exemption. But in two large units, 10 percent of reservists have received exemptions. 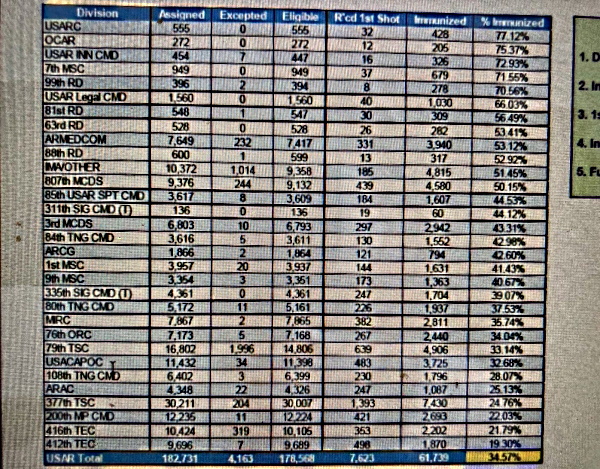 The Army did not dispute the authenticity of the figures. Lt. Colonel Terence M. Kelly, a spokesman for the Army, said in an email that the Army now believes that at least 44 percent of its reservists have received at least one shot, an increase of 5 percentage points since Sept. 20.

Lt. Colonel Simon Flake, a spokesman for the Army Reserve, declined to discuss the force’s specific plans to convince reservists to be vaccinated by June 30 or what actions it would take against those who refused to comply.

But Lt. Colonel Flake wrote that commanders have “ordered all Army Reserve units to ensure the majority of their force is fully vaccinated by January 1, 2022.”

Alex Berenson is a former New York Times reporter and the author of 13 novels, two non-fiction books, and the Unreported Truths booklets. His third non-fiction book, PANDEMIA, on the coronavirus and our response to it, will be published on Nov. 30.