Submitted by Rusty Weiss of The Mental Recession,

Robby Dinero, the owner of Athletes Unleashed gym located in Orchard Park, New York, tore up a $15,000 fine from the Erie County Health Department during a live Fox News interview. 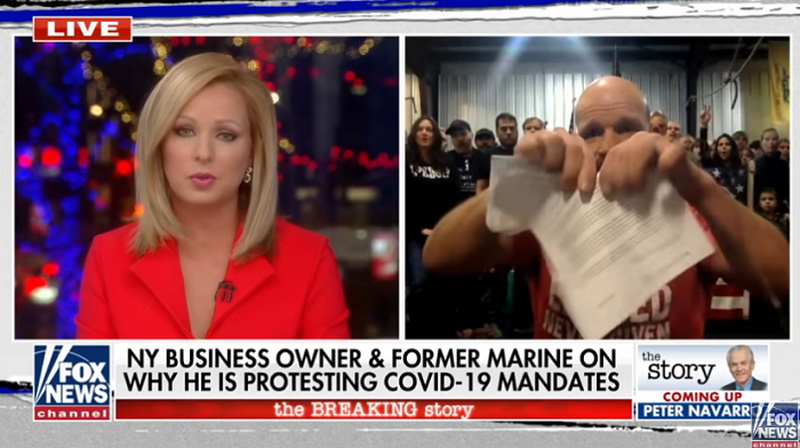 Dinero got hit with the extraordinarily hefty fine following a confrontation in which roughly 50 business owners attending a meeting inside the gym refused to allow a pair of sheriffs and a health inspector entry to the building without a warrant.

“They picked a fight with a Marine and a whole bunch of patriots,” the gym owner said in a separate interview with WBEN, before pointing out that “The Constitution protects those rights.”

The moment tonight when Athletes Unleashed gym owner Robby Dinero ripped up the $15k fine he received today from @ECDOH LIVE on @FoxNews. The fine was for holding a rally inside his gym Friday night. @NewsRadio930 pic.twitter.com/FUk6sOSCX4

New York Gym Owner Rips Up His Fine, Says He Will Not Comply

The veteran, having pointed out Cuomo’s and Erie County Executive Mark C. Poloncarz six-figure taxpayer-funded salaries, challenged them to look their constituents’ children in the eyes and tell them their parents’ work is not “essential.”

The lockdown rules, he believes, deny citizens their Constitutional right to earn a living.

Dinero then ripped up the fine on camera while supporters behind waved American flags and shouted, “We will not comply.”

Robby Dinero, the owner of Athletes Unleashed, tells WBEN that this protest today is about one thing: Freedom. They’re protesting the continued lockdown and he said they’re not able to get customers and because of the shutdown, they can’t replace them. pic.twitter.com/zf1wHgcloy

Last week, Dinero held a meeting with business owners inside his gym. He explained that the meeting was a protest of New York’s regulations that have closed gyms, salons, and other businesses deemed nonessential.

Oddly enough, despite the state’s blind eye to riots under the guise of ‘protests’ over the summer, authorities took issue with this particular peaceful protest. Sheriffs and the health inspector showed up and things escalated as the business owners refused to let them on the property without a proper warrant.

“Get out! Get out!” they repeatedly yelled.

As the authorities leave, one protester can be heard shouting, “Take your Commie s*** elsewhere!”

Cuomo has been regulating everything in his state during the pandemic, from what time New Yorkers can eat in restaurants to what they can eat in restaurants, and on to what people can do in their own home. His constitutional overreach has prompted several sheriffs to refuse to enforce his orders.

Cuomo responded by calling any sheriff who refuses to enforce his edicts a “dictator.” He said that without a hint of irony.