La Quinta Columna has gained the support of several researchers both in Spain and around the world.

A prominent researcher among those collaborating with them is the author of the Corona2Inspect blog, Mik Andersen, who’s carrying out “high-level research work“, as described by Dr. Pablo Campra during the presentation he gave on November 2.

On this occasion, the featured blog published an article about possible nanorouters that can be seen in some of the photographs taken by Dr. Campra. These nanostructures, most likely, would be part of the system that would allow the generation of MAC addresses in inoculated individuals.

Orwell City brings below the comments made by La Quinta Columna on this remarkable research entitled:

Well, you know there’s a blog called Corona2Inspect. The author is Mik Andersen. He writes under this pseudonym. He’s an important person. On this occasion, he has posted an article today, November 25. It’s titled “Pattern identification in coronavirus vaccines: nanorouters.” And the images he presents are very curious because he’s taking images out of the scientific literature and comparing them to what Dr. Campra found in different vials.

“Since the discovery of graphene oxide in coronavirus vaccines, all the findings and the discovery made only confirm its presence (Campra 2021). To date, we’ve also found evidence of more than reasonable indications of the existence of nanotubes, carbon nanoribbons, mesoporous spheres, colloidal nanoribbons…”

Here are the different links.

“Objects that shouldn’t be part of any vaccine and that aren’t declared among the components of the vaccines. Additionally, other types of objects have been identified and evidenced in images of blood samples from people vaccinated with coronavirus vaccines. Specifically, micronadators, crystallized graphene nanoantennas, and the famous graphene quantum dots, also known as GQD. On this occasion, analyzing one of the images obtained by Dr. Campra, I remember seeing this, corresponding to a sample of the Pfizer vaccine. See Figure 1, which is this one here, has discovered what’s most likely a nanorouter or part of its circuitry.

And this is where it gets interesting because they did indeed appear to have typically printed circuit designs. Especially those of us who have worked with electronics and draw the tracks were reminded of that.

“In the original image, a well-delimited drop can be seen in which there’s a crystalline structure of quadrangular or cubic shape. If you look closely, you can see some marks in these crystals with a regular pattern, well delimited in some cases, but limited by the optics of the microscope. The finding has been possible by isolating each quadrangular crystal by applying a process of rastering, focusing, and delimitation of the edges of the image…”

José Luis, this is also being analyzed by another chemist. We’ve got to have a meeting with Campra.

“…To further pronounce the observed marks.” “Once this process was completed, a draft was drawn with the lines and patterns inscribed on the crystal, creating a clean outline of what actually looked like a circuit. It was very striking to find parallel and perpendicular lines with a distribution far from what would be fractal patterns —which would correspond, then, to crystals’ randomness—, which allowed us to automatically infer the possibility that it had been the product of manufacturing.”

“Therefore, we looked for similar patterns in the scientific literature that had a similar scheme to the circuit that had just been drawn.”

I’m going to zoom in a little bit more so you can see it better. There. I’ve gone a little too far.

“The result of the search was almost immediate since the pattern of a quantum dot nanorouter was found, as shown in Figure 2.” 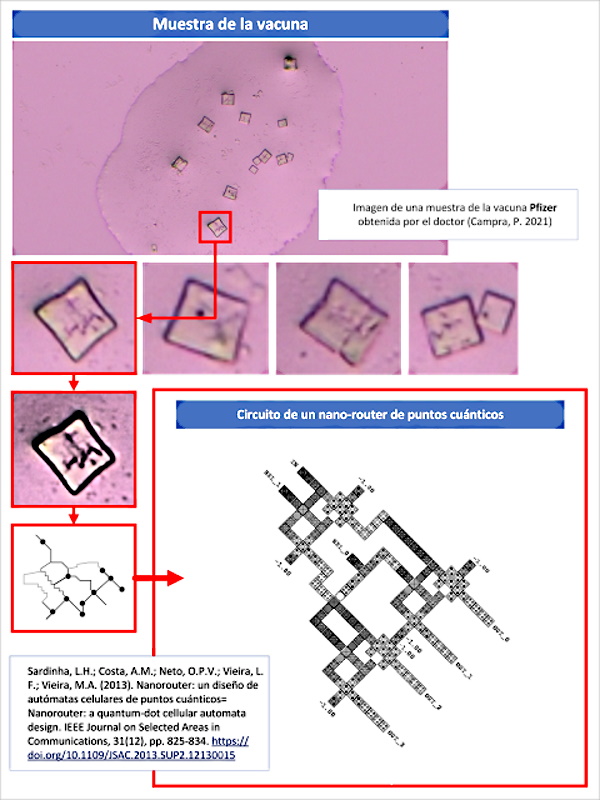 The images have been enlarged here. See, for example, this one here, which is very clear. It has these things like printed circuit board tracks. And this, what you see here on the right, is taken from the scientific literature. It’s a circuit of a quantum dot nanorouter. It actually has a very striking resemblance.

“Possible quantum dot nanorouters were observed in a quadrangular crystal in an image obtained by Dr. Campra.”

I seem to remember that it was the Pfizer vaccine. Precisely the first one, I think.

“In the lower right corner is the quantum dot nanorouter circuit published by Sardinha in 2013. Note the obvious resemblance between the sketch, the shape written on the crystal, and the quantum dot circuit.”

See? It’s very similar. Very similar even in the distribution it has. Quite similar.

“This discovery is of fundamental relevance. Not only to understand the true purpose and components of coronavirus vaccines, but also to explain the existence of the phenomenon of MAC addresses visible through the Bluetooth of many mobile devices. Because nanorouters, then, will, like routers, broadcast visible MAC addresses in, in this case, Bluetooth wireless technology, as is being proven, as well. The context of the discovery is as follows. Before proceeding to the explanation of the finding, it’s worth recalling the context in which it is framed, to ensure its understanding and subsequent deepening. First of all, it should be borne in mind that graphene and its derivatives, graphene oxide and carbon nanotubes, form part of the components of vaccines, as has already been explained in this blog. The properties of graphene are exceptional from a physical, thermodynamic, electronic, mechanical, and magnetic point of view. Its characteristics allow it to be used as a superconductor. It’s an electromagnetic wave absorbing material, a signal emitter-receiver, a quantum antenna which makes it possible to create advanced nano and micrometric scale electronics.”

Well, remember that these images were seen under the optical microscope. Those that you see in pink.

“So we would be talking, in this case, about micro-metric structures. So, the fundamental material for the development of nanobiomedicine…”

Here he talks about a paper.

Well, he talks about different studies.

“However, aside from all the benefits, the scientific literature is very clear about the health implications for the human body. It’s notorious that graphene, graphene oxide (GO), and other derivatives such as carbon nanotubes (CNT) are toxic in almost all their forms, causing mutagenesis (or cancer, chromosomal alteration), cell death, apoptosis, necrosis, the release of free radicals. And as a consequence of that, it increases toxicity rapidly in the lungs, favoring the cytokine storm that you know as bilateral pneumonia, genotoxicity, or DNA damage.”

All those studies that we have reviewed. “Systemic inflammation…”

“Immunosuppression, damage to the central nervous system, circulatory, endocrine, reproductive, urinary system, which can cause anaphylactic death (we also saw another study on that), and multi-organ dysfunction.”

“Secondly, graphene is a radiomodulatable nanomaterial.”

This is very important and one that people need to understand. And here’s the interaction with those radio frequency antennas.

All the links are here. This blog is very, very important to go deeper.

“It can also multiply radiation, acting as a nanoantenna, or else a signal repeater, a transistor. Exposure to electromagnetic radiation can cause the exfoliation of the material into smaller particles called GQDs (Graphene Quantum Dots), whose properties and physical peculiarities are enhanced due to their even smaller scale due to the “quantum hall effect,” since they act by amplifying electromagnetic signals and, with that, the emission distance, especially in environments such as the human body. Graphene quantum dots can acquire various morphologies, for example, hexagonal, triangular, circular, or irregular polygon.”

The truth is that this article is very long, but extremely interesting from beginning to end. And here, what’s most striking from the optical-visual point of view is the comparison, José Luis. If we compare the image of what’s in the scientific literature, you can see that it’s practically the same. Notice that it has… It’s the same!

I recall that when we started to see the images, at first, we thought that those structures that appeared there were sugar crystals or something like that. Heh, sugar crystals are a thing of the past.

That given what we’re seeing.

Exactly. Given what we’re seeing. It’s just that people don’t understand this. That’s why they’ve been pounding our brains for 20 or 30 years since the X-Files started. Mulder and Scully started to tell us fictional movie stuff, that this Mothman, that I don’t know what, that this and that. Crazy fiction stuff.

But they were preparing us psychologically for the mess they were going to make. All they do is watch weird series of strange things and, in the end, they say: “All this that these people are telling us is crazy.”

But that’s what they’re doing. They’re injecting something into people that, at the moment, is killing them. At some point, surely, they’re going to modulate them with it. At the same time, they’re mutating us for future generations.