Photographer Captures One of the Last Female Eagle Hunters of Mongolia

While golden eagle hunters were historically male, women did eventually break through but now the number of female hunters has plummeted to only ten. 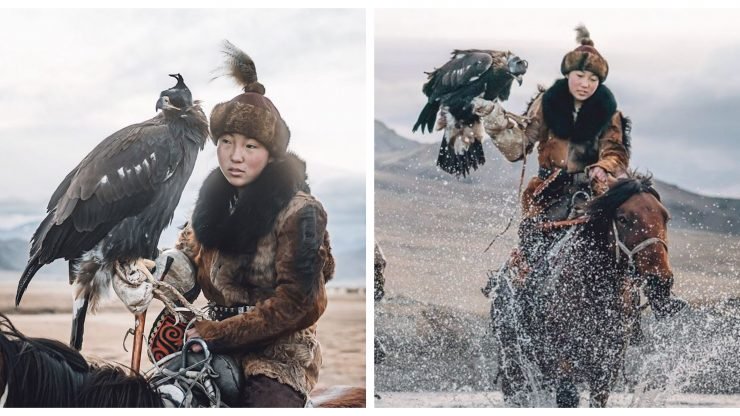 (TMU) — The nomadic tribes of western Mongolia have used the golden eagle to hunt for some 4,000 years. Today, only 10 women still practice the skill of hunting with eagles.

The tribes of the Altai region have trained young men and women in the art of hunting with golden eagles for centuries. While training to master this rare skill the hunters form a strong bond with their eagles.

Silhouettes of two eagle hunters during sunset. ⁣ What a time to be alive.⁣ ⁣ @followthetracks #mongolia #eaglehunters

Known as burkitshi, golden eagle hunters were historically male—the ancient art being handed down from father to son. Women did eventually break through the cultural “glass ceiling” and became excellent burkitshi.

However, the number of female hunters has plummeted to only ten.

Zamanbol, a member of the Kasakh tribe, is one of these female hunters and understands that she is part of a dying breed. She is not a full-time hunter like the rest of her family but spends her weeks in the city at school and trains as a hunter on weekends.

This is Zamanbol: one of just ten eagle huntresses in Mongolia keeping this old tradition alive. She's part of a Kazakh nomad family living in the Altai region of Mongolia. During the week, she goes to school in the city – on the weekends she visits her family and trains with her bird of prey alongside her brother. #mongolia #eaglehuntress #eagle @followthetracks

The training hasn’t changed since it started millennia ago, and the hunters dress in traditional handmade furs and leather while riding on horseback with their eagles.

The eagles are captured at around four years old. They are old enough to be able to hunt and young enough to adapt to human contact and form a bond with their human hunter. The eagles are treated as part of the family, fed by hand, and live in the family home in comfortable quarters.

From as young as 13, children will be given young female eagles to begin the bonding process which will continue for 10 years.

Zamanbol and her brother Barzabai have established strong bonds with their eagles, demonstrated by an ability to communicate with their birds during the hunt—a physically and mentally demanding process.

The hunters trek high up into the mountains and find a suitable vantage point from where to survey the valleys and plains below. They release the eagle perched on their arm once a target is spotted (usually a small mammal like a hare or a fox).

The eagle then swoops down and captures the prey and soars back up to the mountaintops to give it over to its hunter. Female eagles are always used as they are larger and more adept hunters than males.

The hunters only keep the birds captive for a 10 year period of their expected lifespan of 30 years or more, allowing them to live free and hopefully breed a new generation of golden eagles.

Letting them go is not an easy task with the strong bond formed. As one hunter recalled of letting his eagle go, “It was as if a member of my family had left. I think about what that eagle is doing; if she’s safe, and whether she can find food and make a nest. Have her hunts been successful? Sometimes I dream about these things.”

Thomas’ images capture Zamanbol on horseback and dressed in handmade fur clothing, radiating with free spirit, strength, and a strong bond with her eagle.

Thomas says of Barzabai (Zamanbol’s 26-year-old brother of the same age as Thomas), “While he’s living in the outdoors surrounded by family, incredible nature and animals, I’m sitting more than 60% of my time in front of a screen. A pretty basic comparison, but it made me think.”

Thomas managed to capture the unique beauty of the ancient—and possibly vanishing—culture of the Kasakh tribe’s kirbitshi, featured below.

Barzabai, the Kazakh eagle hunter. What we’ve in common: we're the same age, 26. What is different: while he’s living in the outdoors surrounded by family, incredible nature and animals, I’m sitting more than 60% of my time in front of a screen. A pretty basic comparison, but it made me think. 👨🏻‍💻

It was humbling being that close to a golden eagle whose wingspan can reach up to 2,34m. As I watched the Eagle Hunter train with his bird of prey, the fact that this animal can take down bigger animals such as goats, mountain cats or wolves, became more and more imaginable to me. 🦅 #followthetracks #mongolia #eagle #goldeneagle

For about 15 years, the hunter lives closely with the eagle. It becomes part of the family. A strong relationship is built over the years and they become a team. Especially, during winter season the fierce eagle helps finding prey. At a certain age, the eagle gets released and spends the other half of his life freely. #mongolia #followthetracks @followthetracks #eagle #eaglehunter #altai

The Mind Unleashed is a Conscious Media Aggregation organization.

“If ordinary people really knew that consciousness and not matter or material possessions is the link that connects us with each other and the world, then their views about war and peace, environmental pollution, social justice, religious values, and all other human endeavors would change radically.”