Polish Refugee in Canada: Communism in Poland Was Defeated Through Non-Compliance

Polish Refugee in Canada: Communism in Poland Was Defeated Through Non-Compliance

“There is a force — a force they cannot take away from us, which is willpower.
And willpower is always driven by love… So if you know what I’m talking
about, use love. Don’t be on their level.”
~ Bojena

A Polish refugee warns that policies and rhetoric that ultimately resulted in Martial Law in Poland is taking place in Canada.

During a “Rally For Freedom” held on November 6th, 2021 in Parliament Hill in Ottawa, a Polish survivor of communism named Bojena delivered a short, but fiery address.

The rally was organized in part by CourageousCitizen.com, and RAIR Foundation USA was in attendance. A speaker with Action4Canada explained that Poland beat communism peacefully.

“They didn’t use guns, they didn’t hijack anybody, there was no bombs going off… They did it through non-compliance,” he said. “And that spread to the rest of Europe,” he continued.

Bojena agreed, explaining that her grandmother was a survivor of the all-women Ravensbrück concentration camp. They were “slaves, working 14-16 hours per day,” Bojena said. “But she survived. Do you know why,” Bojena asked. “Because she had forgiveness in her heart but she was this kind of woman, okay?”

To illustrate her grandmother’s attitude during her time at the Ravensbrück concentration camp, Bojena made a gesture: 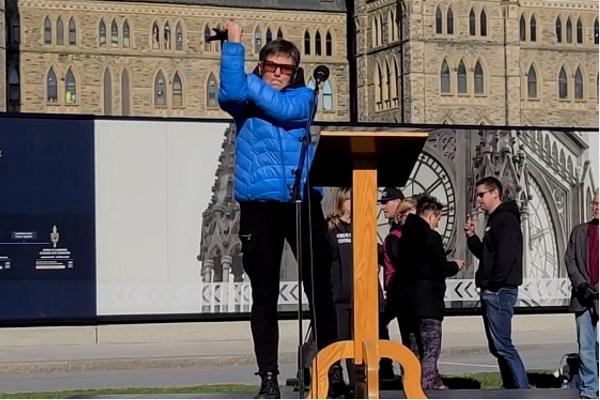 Bojena’s message is simple. To stop communism: Do Not Comply.

When Bojena was 17 years old, she was inspired by Poland’s anti-Communist Solidarity movement under Lech Walesa. “When I was 17, I was beaten, arrested actually twice… I came to Canada recognized as a political refugee,” she explained.

From a previous RAIR interview with Bojena:

But now the Polish refugee sees policies and rhetoric that ultimately resulted in Martial Law in Poland taking place in Canada. ‘We’ve been there, we Polish people – we’ve been there – the entire communist block – we’ve seen what the communists are capable of doing,’ she continued. ‘Please stand up before it’s too late,’ Bojena said.

Stressing the importance of non-compliance, Bojena said “[N]on-Compliance is my second name, okay?” Non-compliance based on the Constitution and Bill of Rights is needed to stop this tyranny, she stressed to the crowd.

We must stop waiting for others to save us, Bojena said. We can only save ourselves, she stressed. “If I can do it, it’s about freaking time you do it,” she said. “Non-compliance. Simply say ‘No!’,” she continued.