Modern technocrats have found lots of ways to ruin our food—like rapid heating of milk to 160 or even 230 degrees, zapping with microwaves, irradiating with radioactive materials, spray drying at high temperatures, extruding at high temperatures and pressures and embalming with sugar. Now a new technology has come on the scene: ultra-high pressure applied to a variety of foods for humans, pets and babies. 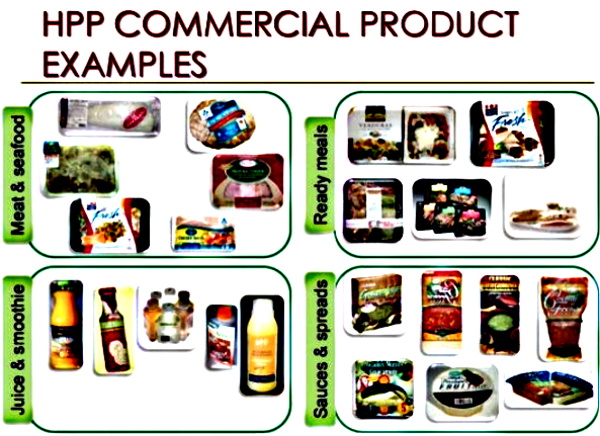 High Pressure Processing (HPP) is defined as “a non-thermal food and beverage processing technique based on the application of high levels of hydrostatic pressure transmitted by water, with multiple advantages for food and beverage companies.” That pressure is one thousand times the pressure of air at sea level—the equivalent of water pressure in a marine trench.

You can read all about it at hiperbaric.com and see how it works for juice, for shelf stable meals ready to eat, and for “raw” pet food.

HPP will open oysters without difficult shucking—after the processing, just open with your hand and the oysters—somewhat discolored– slither out! The process makes crab and lobster easier to remove from their shells.

Examples of high-pressure processed products commercially available in the U.S. today include fruit smoothies, guacamole, ready-to-eat meals with meat & vegetables, oysters, salad dressing, hummus, ham, chicken strips, fruit juice, salsa and fruit purees for babies.  You won’t find any particular symbol displayed (as for irradiation) to indicate whether a product has undergone HP processing, but you might see the words “cold pasteurized.”

The food industry claims that “HPP has the potential to produce high-quality foods that display characteristics of fresh products, are microbiologically safe and have an extended shelf life.”

The claim that HPP foods are “microbiologically safe” is not exactly correct.  A 2008 review entitled “High-pressure processing – effects on microbial food safety and food quality,” looked at the effects of high pressure processing on various pathogenic organisms and found that it did not eliminate all of them; the researchers found that spores were especially resistant to high pressure—just as they are resistant to heat.

But what we really want to know about are the health effects—long-term health effects–of eating HPP foods. As the industry plunges headlong into high pressure processing, no one really knows. No studies on long-term the feeding of HPP foods to mice or rats—or even dogs getting HPP “raw” pet food—appear in the literature.

I did find one study, published in the Journal of Dairy Science, 2016 which explored the feeding of HPP colostrum to calves. Said the researchers: “The results of this study suggest that high-pressure processing of bovine colostrum maintains an acceptable IgG level while decreasing bacterial and viral counts,” but also observed, “Calves fed pressure-processed colostrum had similar serum IgG but lower efficiency of absorption than calves fed heat-treated colostrum [emphasis added]. Changes in viscosity sometimes made calf feeding more difficult, but still feasible. Additional research to optimize this technology for on-farm use is necessary.”

The food industry is salivating over the idea of applying HPP to milk.  The first to do this was the Mexican company Villa de Patos , which claimed that it was “fresh” (that is “raw”)  and had an increased shelf life when refrigerated.

A few years later, the New South Wales Food Authority approved the commercialization of HPP milk in the Australian state. The company Made By Cow developed a process for the “safe production of never heated and non-homogenized milk,” which they could sell as “safe raw milk.”  Indeed, the processing made the milk slightly thicker and yellowish, which could mimic the viscosity and color of Jersey milk even if it came from Holstein cows!

With raw milk sales booming, and pasteurized milk sales declining, we can expect to see the dairy industry launch “cold-processed” pressure-treated milk in the U.S. Will this milk have the same benefits as real raw milk?  A letter published in the Summer 2021 issue of Wise Traditions indicates that the answer is no!

“For many years I have been con­suming raw milk from a pastured dairy in France called Gaborit,” wrote our correspondent. However, because of Covid and closed borders, I was unable to obtain this milk for eleven months and was forced to drink a substitute milk from Switzerland. When I began to have trouble with my teeth, I began to suspect the possibility that the local “raw” milk (Rohmilch in German) might be thermized (heated) although not to the temperature of pas­teurization (or perhaps microfiltered or whatever).

“What most aroused my suspi­cions was the experience of a friend, supposedly milk intolerant (and who hasn’t drunk animal milk for a good twenty years), who sneezed (red eyes as a bonus) a few minutes after having taken a sip of this “local” Rohmilch. She made it clear to me how irritated she was by this ex­perience and she fervently blamed herself for giving in to my sugges­tion. However, I must admit that I was the first to be surprised by the reaction she de­veloped so quickly after drinking just one sip. I had con­cluded that she was perhaps one of the very few people who were truly intoler­ant to animal milk, even if it were raw.

“Nevertheless, a few weeks later, she agreed to test the Gaborit milk (from Jersey cows), which I again had access to. She not only had no reaction to it, but she even felt so good that she drank a whole glass half an hour later.

“During the eleven months without the Gaborit milk, I developed five small cavities, as verified by my dentist. I had an appointment to have them filled, and while waiting, was able to get the French milk again. I went to the dentist today and she couldn’t believe her eyes.

“In the space of less than a month during which I was once again able to obtain the real certified raw milk from France, all the previously damaged teeth had calcified and hardened as a kind of self-healing, to the point that she told me that there was nothing more that needed to be done.

“The milk produced by the Swiss dairy is biodynamic and has the Demeter label. The cows are brown Swiss. I therefore assume that the cows are fed according to anthroposophi­cal guidelines. However, this dairy also produces pasteurized milk, so I wondered whether their Rohmilch is really 100 percent raw and, above all, non-thermized. When I contacted them, they assured me that the milk was not heat-treated in any way, only that they passed it through a cellulose membrane aimed to remove any impu­rities or dirt from the milk—but I think this is done with all milk and is not a damaging process unless done under high pressure.”

We do not know whether this milk was passed under pressure through a membrane or subjected to the same high-pressure processing techniques now used for juice, smoothies and so many other “cold processed” foods, but it is clear that pressure reduces the healing properties of Nature’s perfect food.

Since we have no idea what HPP does to the nutritional qualities of the food we eat, it’s best to exercise caution:  make your own salad dressing, salsa and guacamole, cook from scratch, only buy oysters that have been shucked before you, and above all, stick to real, raw milk purchased directly from a farmer you know.