It was never about public health and Russians know it

The Russian government is still planning to push through a deeply unpopular nationwide QR code law—but making such legislation a reality could be a tall order.

In some regions where QR codes are already in place, authorities have hastily abandoned enforcement efforts.

Fed-up Russians are boycotting, bypassing, and beating people up.

On November 22, Kazan, the capital of Tatarstan, became the first city in Russia to require QR codes for public transportation. The new rule led to absolute chaos: buses were being delayed by twenty minutes or more as conductors struggled to check QR codes—and there were numerous reports of angry passengers starting brawls.

It appears that Kazan basically… gave up. QR codes are still required to use public transport, but the rule is not enforced in any meaningful way.

In early December, Ilya Zotov, a member of the Public Chamber of the Russian Federation, Chairman of the All-Russian Association of Passengers, decided to investigate how Kazan’s QR codes regime works in practice.

His findings were quite extraordinary:

“Briefly: I traveled on 4 different bus routes, 1 trolleybus, and also in the metro. What did I see in fact?

– on 4 bus routes the QR code was never asked;

– in the trolleybus they asked if I had a code, I said yes (which is true), but they did not ask me to show it;

“In the metro, QR codes are checked at the entrance to the station, but you can show any code (of a relative or friend), there is no data reconciliation,” Zotov, wrote in his Telegram channel.

He also said that 70% of passengers were not complying with mask rules. The takeaway? Maybe this is not such a good policy:

“I come to the conclusion that this whole imitation is not needed… It is better for the authorities of Tatarstan to honestly admit this and cancel QR codes in transport,” Zotov wrote.

Enforcement reportedly remains quite lax. At the Doctors for Truth conference in Moscow on Sunday, your correspondent spoke with an activist who said that she recently took several bus rides in Kazan without having to present a QR code.

The most dangerous job in Russia?

One of the problems with enforcing QR codes in Russia is that you can get stabbed for doing it. On paper it sounds like a major growth industry, but is it really worth the lousy pay and the constant beatings?

For example, at the end of November a mall cop in Kazan was wounded in the arm with a knife after he asked a man for his QR code.

In some parts of Russia, violent opposition to QR codes appears to have played a key role in dropping the regime altogether.

REGNUM, citing local media, reported that a city in Altai gave up on enforcing QR codes in their shopping centers—partly due to the “very aggressive attitude of citizens towards the procedure”:

According to one of the managers of the shopping center, two inspectors were beaten up in the first ten days of the introduction of the vaccination inspection system in the Altai Territory.

St. Petersburg restauranteur Alexander Konovalov owns dozens of businesses. He announced last month that he would not be complying with the city’s QR code rules:

“The introduction of QR codes, the assignment of numbers, as in a concentration camp, is fascism. I have more than 200 establishments (among them bars, hookah bars, bakeries, beauty salons), in all my establishments they will not ask for a QR code. From time to time they come to us with checks, but we simply do not pay attention to it. Let them come.” 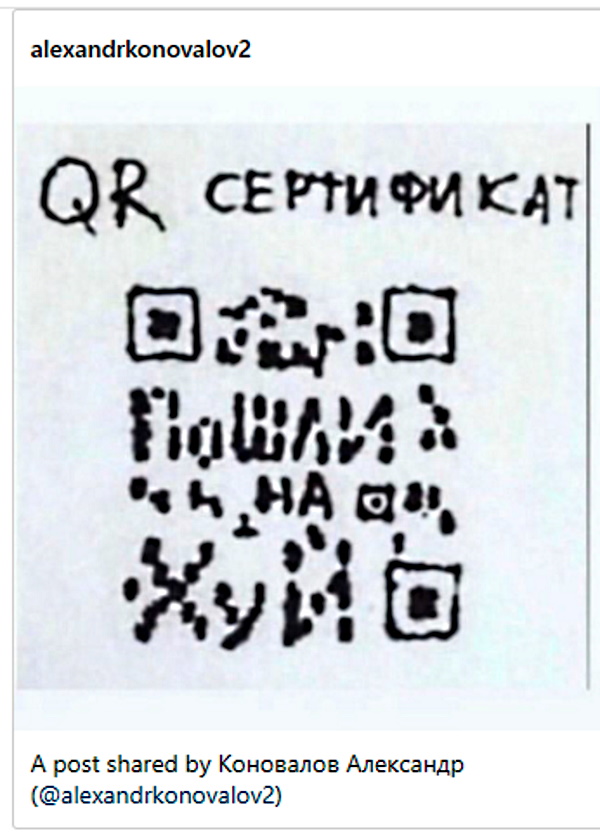 (Konovalov shared his “QR code” on his Instagram page, which reads: “Fuck you.”)

Notably, he claimed he has yet to be fined for disobeying the “public health” measure.

Meanwhile, dozens of St. Petersburg residents have filed a class action lawsuit against the city government demanding the removal of the QR code regime.

The United Russia party supported the bill on QR codes in public places, subject to its deep revision. This was announced on Monday, December 13, by the head of the faction in the State Duma, Vladimir Vasiliev.

Earlier this week it was announced that the State Duma had withdrawn parts of this bill that called for QR codes for trains and air travel—but it turns out this was slightly inaccurate:

“As for the introduction of QR codes in transport, this bill has not been removed from the agenda, but sent for revision. It is being studied and worked out in detail. As a doctor and as an MP, I believe it is very important to maintain restrictive anti-epidemic measures in order to curb the growth of morbidity. Tatyana Alekseevna Golikova came to the State Duma, she answered questions in great detail, with all the clarifications. In public places, QR codes will be valid. The only exception will be grocery stores and pharmacies. And all other publicly accessible places will be admitted only by QR codes. These are restaurants, theaters, museums, shopping centers—all of this will be done using QR codes,” said [United Russia member] Tamara Frolova, member of the State Duma Health Protection Commission.

What is the public health benefit of these codes? Can anyone explain this? And why does United Russia continue to pursue brazen political suicide? It’s very weird.

As we’ve mentioned before, the Russian government will probably need to simulate a fake alien invasion in order to spook people into accepting a digital ausweis. In the meantime, Russians will continue to use QR codes taken from washing machines to gain access to their local shopping centers.