by The Rutherford Institute
September 17, 2020

COLORADO SPRINGS, Colo. — The Rutherford Institute has issued a precautionary “opt out” letter as a means by which families whose children are taking part in remote learning / virtual classes might assert their Fourth Amendment privacy rights and guard against intrusive government surveillance posed by remote learning technologies. The Institute released its model “Parental Reservation of Rights – Remote Learning Surveillance” letter in the wake of a growing number of incidents in which students have been suspended and reported to police by school officials for having toy guns nearby while taking part in virtual schooling.

“Remote learning should not justify the expansion of draconian zero tolerance policies to encompass so-called ‘violations’ that take place in students’ homes and home environments. Nor should remote learning be used as a backdoor means of allowing government officials to conduct warrantless surveillance into students’ homes and home environments,” said constitutional attorney John W. Whitehead, president of The Rutherford Institute and author of Battlefield America: The War on the American People. “While COVID-19 has undoubtedly introduced significant challenges for the schools, the protocols adopted for navigating these circumstances demand a heightened degree of caution lest government officials heedlessly, needlessly and unlawfully violate key constitutional safeguards established to protect the citizenry against invasive and warrantless intrusion into the home.”

In issuing the model Reservation of Rights letter for use by parents with children enrolled in virtual classes, Rutherford Institute attorneys warned government officials against leveraging the current public health situation to further erode the privacy of American citizens: “At a minimum, schools must not use virtual learning platforms to conduct unwarranted surveillance of students’ homes nor use observations made from within the home as a basis for alleging a crime has been or is being committed.” The issue arose after Isaiah Elliott, a seventh grader at Grand Mountain School in Colorado Springs, Colo., was reported to police by school officials for playing with a toy gun in the privacy of his own home during a virtual class on the morning of August 27, 2020. Not only was the 11-year-old suspended for five days for “bringing” a “facsimile of a firearm to school,” but he was also traumatized when a police officer showed up at his home to interrogate him. School officials reported the incident to the El Paso County Sheriff’s office, and a deputy was dispatched to the school. The deputy reviewed a video of the art class that was recorded without the knowledge or consent of students or their parents and saw the boys playing with the toy gun. A police officer was then dispatched to the Elliott home, where he confronted Isaiah, warning him that he could face criminal charges in the future. Rutherford Institute attorneys have called on school officials to expunge Isaiah’s suspension. Institute attorneys also warned school officials against adopting draconian disciplinary measures that fly in the face of common sense and constitutional standards.

The Rutherford Institute, a nonprofit civil liberties organization, defends individuals whose constitutional rights have been violated and educates the public about threats to their freedoms. 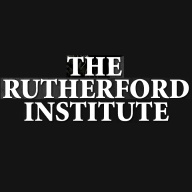