Rutherford Institute Issues Special Report on Second Anniversary of COVID-19: The Right to Be Let Alone in the Face of the Government’s Power Grabs

Home / Freedom & Natural Law / Rutherford Institute Issues Special Report on Second Anniversary of COVID-19: The Right to Be Let Alone in the Face of the Government’s Power Grabs

Rutherford Institute Issues Special Report on Second Anniversary of COVID-19: The Right to Be Let Alone in the Face of the Government’s Power Grabs

CHARLOTTESVILLE, Va. — Coinciding with the second anniversary of the COVID-19 outbreak, The Rutherford Institute has issued an in-depth, follow-up report on the impact of the nation’s response to the pandemic on civil liberties.

The 2022 report, “The Right to Be Let Alone: How to Safeguard Your Freedoms in the Face of the Government’s COVID-19 Power Grabs,” posits that the government’s response to the pandemic has become a massively intrusive, coercive and authoritarian assault on the right of individual sovereignty over one’s life, self and private property. As such, concludes John W. Whitehead, these COVID-19 mandates have become the new battleground in the government’s tug-of-war over bodily autonomy and individual sovereignty.

“Right now, COVID-19 vaccines are the magic ticket for gaining access to the “privileges” of communal life,” said constitutional attorney John W. Whitehead, president of The Rutherford Institute and author of Battlefield America: The War on the American People. “Having already conditioned the population to the idea that being part of society is a privilege and not a right, such access could easily be predicated on social credit scores, the worthiness of one’s political views, or the extent to which one is willing to comply with the government’s dictates, no matter what they might be.”

In March 2020, the World Health Organization declared the novel coronavirus, COVID-19, to be a pandemic, resulting in the most widespread and disruptive public health emergency in our lifetime. Since that time, political leaders from the president to governors to mayors have subscribed to a broad range of actions aimed at limiting the spread of COVID-19, some of which have been draconian and unprecedented. On the one-year anniversary of the COVID-19 outbreak, The Rutherford Institute issued an in-depth reporting, “Civil Liberties in the Age of COVID-19,” to address the delicate balance that must be struck between security and civil liberties, the hazards of government overreach, and the long-term ramifications of an “emergency state” in which the government is increasingly empowered to declare a state of emergency and impose lockdowns, mandates and restrictions in order to address a broadening range of concerns that prioritize the government’s wide-ranging and varying institutional concerns over the individual rights of the citizenry. Coinciding with the second anniversary of the pandemic, The Rutherford Institute has issued “The Right to Be Let Alone: How to Safeguard Your Freedoms in the Face of the Government’s COVID-19 Power Grabs,” which examines the far-reaching ramifications of how the pandemic has impacted the legal, moral and political debate over who gets to decide what happens to our bodies during an encounter with government officials. As the report warns, “This merely pushes us one step further down that road towards a total control society in which the government in collusion with Corporate America gets to decide who is ‘worthy’ of being allowed to take part in society.” 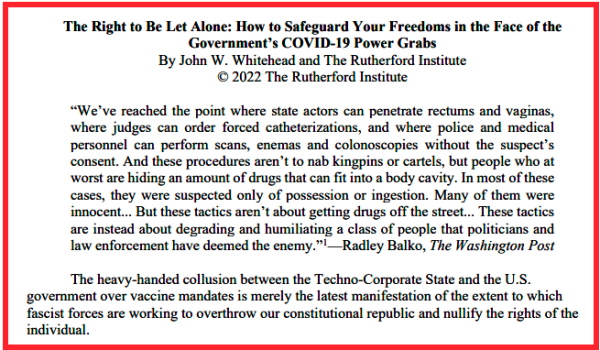 Connect with The Rutherford Institute

cover image based on creative commons work of KELLEPICS