Two years ago, in May 2019, I wrote an article titled Planetary Emergency, in which I explained what was about to happen to our world, listed the board members, chief officers and principal investors in SpaceX and OneWeb, and asked for help in reaching out to them. I wrote:

“Please contact me if you know any of the gentlemen or ladies I have listed, or if you know someone who can get us an audience with one of them. All we need is one. An opening into that community of billionaires, to begin a dialogue that will save this planet…

“All these people have families and children and have a stake in the future of the Earth. Some — for example, Kimbal Musk and his wife, Christiana — are long-time advocates for the environment and investors in environmental causes.”

In two years not a single person has answered that plea, and we are now only months away from global catastrophe. Below I will update you on the extraordinary escalation of the assault on the Earth’s life-giving envelope that is in progress, and I will renew my call for help.

Last month’s newsletter (Survey Results) contained a summary of about 1,000 emails I received from subscribers reporting sudden illness in themselves and their spouses, children, parents, neighbors, friends, coworkers, clients, cats, dogs, chickens, goats, and cows that I received from all over the world. On March 24-25, the first time that SpaceX and OneWeb both launched satellites on the same day, most people that I spoke with or heard from experienced similar, dramatic illness that came out of nowhere. Pain and itching all over their bodies, especially their legs, feet and head. Sudden increase in the ringing in their ears. Profound exhaustion and complete inability to sleep. Muscle spasms. Skin rashes. Stomach aches and diarrhea. Nosebleeds. Heart palpitations. Inflamed eyes. Ill temper, depression or suicidal thoughts.

In the following weeks it became clear that something extraordinary had happened, and is continuing to happen, not only to my friends and subscribers, and not only to people and their pets and farm animals.

In my newsletter of May 5, 2020 (The Evidence Mounts), I reported the sudden illness and deaths of thousands of blue tits and other small birds in Germany, in the Mosel River Valley and other areas with poor cell phone reception. They were described as “apathetic birds with breathing problems.” This occurred during March and April 2020, while Vodafone was upgrading its cell phone service in these regions from 2G to 4G LTE and building hundreds of new cell towers.

The German environmental organization NABU has been monitoring the health of these birds ever since and, like illnesses in the humans I heard from, blue tit deaths spiked in Germany beginning on March 25, 2021: 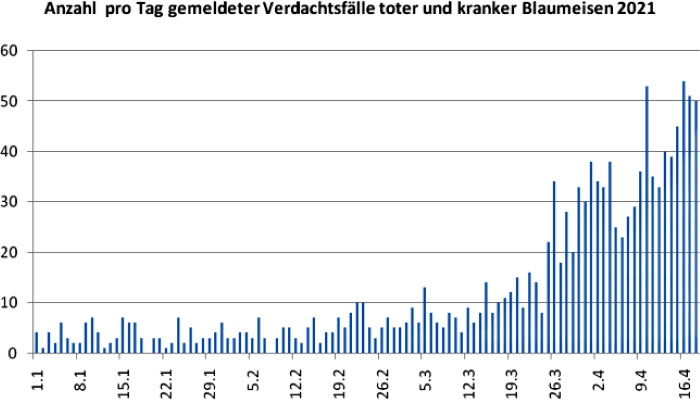 And lest anyone think that there aren’t animals that know what is going on, consider this report from a subscriber in Ireland:

“One of our cats now sometimes howls during the night, then takes my daughter upstairs, stands by the WiFi box demanding it’s turned off, then settles down to sleep.”

As I reported in my last newsletter, March 25 registered the second highest number of COVID-19 cases worldwide this year, and the fifth highest since the pandemic began.

There were strange natural anomalies reported as well, that I cannot explain but neither can anyone else. A woman in Hoboken, New Jersey took this picture of worms arranging themselves in a great spiral on the sidewalk. It was on March 25, 2021: 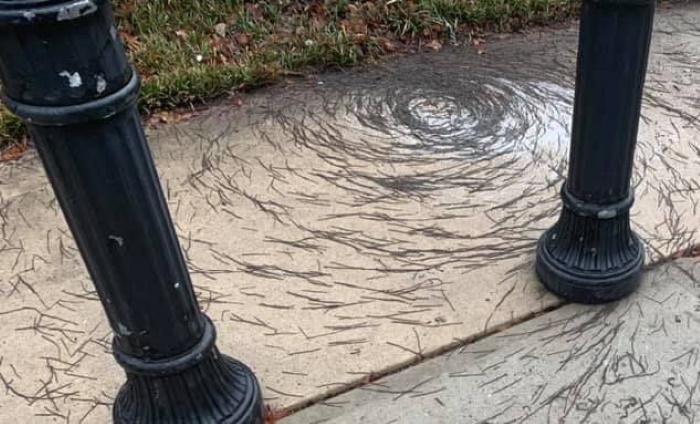 And photographs of hundreds of unusually silent sheep, also arranged in a perfect spiral, were taken by by Christopher Hogg, a lecturer at Royal Holloway University, London on March 26, 2021: 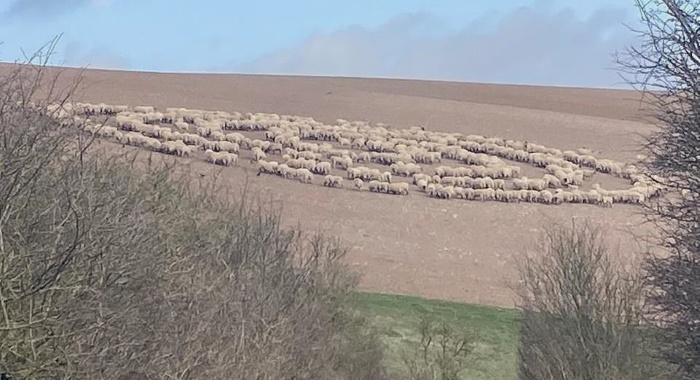 Both SpaceX and OneWeb have announced that they plan to begin commercial service this year. They are both racing to convert the most beautiful place in the world, whose unchanging vista has given a sense of peace and belonging to millions of generations of people, animals and birds — the heavens — into the world’s largest garbage dump, streaking with moving lights and the refuse of burned up and exploded satellites.

With its launches of April 28, May 4 and May 9, 60 more satellites per launch, SpaceX now has 1,554 operating Starlink satellites in low orbit around the Earth. For command and control of these satellites it has already built 61 ground stations in the U.S., 1 in Canada , 6 in New Zealand, 9 in Australia, 2 in Germany, 2 in France, 3 in the UK, and 7 in Chile, and many more are under construction. More than 10,000 customers are now beta testing the satellite network, and 500,000 people worldwide have pre-ordered user terminals. SpaceX expects to fill all their orders and begin commercial service of high-speed Internet from space this summer. At that time, users will still only be able to receive stationary service in a single location. By the

end of 2021, SpaceX expects to also be able to provide mobile service anywhere in the world with user terminals that can be mounted on ships, planes, RVs and trucks.

With its launch of 36 more satellites on April 25, OneWeb now has 182 satellites in low polar orbit. It has announced that by June of this year, after two more launches, it will be able to provide connectivity to the UK, Alaska, northern Europe, Greenland, Iceland, the Arctic Seas and Canada, that it will begin commercial service to those northern regions before the end of this year, and that it will provide global service in 2022.

SpaceX states in its application to the FCC for approval of its mobile user terminals that it is responding to consumer demand. It states that by 2022 approximately 4,800 billion gigabytes of data will be exchanged worldwide per year. “No longer are users willing to forego connectivity while on the move,” writes SpaceX.

And that is exactly the problem. People are treating data, which didn’t even exist as a commodity until the 1990s, as their God-given right. They do not understand that “data” is not something abstract but has its source in a finite and increasingly scarce natural world. That when you manipulate “data” you are manipulating forests, oceans and wildlife. People do not understand that the more data you shoot all over the world, the quicker you scramble this planet’s ecosystems until there is nothing left of them.

Meanwhile, building and launching rockets is becoming quicker, easier and cheaper all the time. A company called Relativity Space is now able to produce rockets using the world’s largest 3-D printer, dubbed “Stargate.” It already has contracts with Lockheed Martin, Telesat, Iridium and other companies and plans to begin launching its disposable rockets this fall. It advertises on its website that its rockets have “100 times fewer parts” and that it can go “from raw material to flight in 60 days.”

Now, virtually anyone can destroy the Earth.

The list of board members, officers and investors in SpaceX and OneWeb in Planetary Emergency is still accurate. I remain convinced that Kimbal Musk, who is both an environmentalist and a board member of SpaceX, as well as being the younger

brother of Elon Musk, is the most likely person to begin a dialogue with us. If you would like to help me contact him, please get in touch with me.

The last 18 newsletters, including this one, are available for downloading and sharing on the Newsletters page of the Cellular Phone Task Force. Some of the newsletters are also available there in German, Spanish, Italian and French.