The (Bill) Gates of Hell Foundation

The (Bill) Gates of Hell Foundation 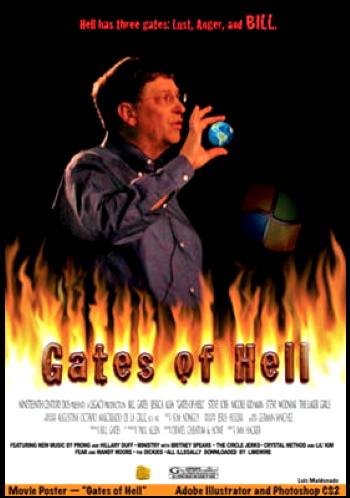 Why mince words when the planet’s being destroyed and we’re all being systematically murdered?

When it finally dawns on you what these New World Order elite globalists are up to it can be staggering.

And it can’t be more in your face than it is right now.

We have chemtrails continually ‘playing’ on the world’s biggest screen, our skies – horrific displays of absolute disregard for all things living. And yet the majority doesn’t even see them and there’s total silence about it from authorities and the media.

Flocks of birds are falling from the sky and millions of dead fish are washing up on our shores, and they all act dumb, like they have no idea what the hell is going on.

The Gulf of Mexico has been killed, the vital loop current disrupted, the weather shot to hell, the food and water are deliberately poisoned and altered, and then they screw with the stratosphere and magnetosphere with a host of devilish devices.

Never mind the deliberately trashed economy and the fabricated ‘war on terror’ while the police state clampdown continues. 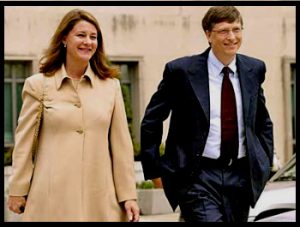 And we’re not supposed to notice?… or think this is deliberate destruction of our world?

And so they trot out a “friendly, respectable face” for this deliberate destruction and depopulation, hoping we won’t notice the havoc being wreaked in front of our eyes, all the while making us think they’re doing us a favor and ‘pioneering our future’.

…And with a message straight from the Bilderbergers which seems to say..

‘It’s time to step up the depopulation plan’…

So good, so clean, so ‘successful’, so giving… 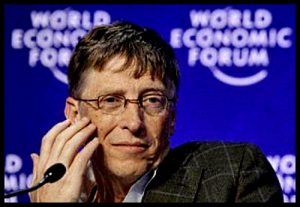 Microsoft founder and one of the world’s wealthiest men, Bill Gates, projects an image of a benign philanthropist using his billions via his (tax exempt) Bill & Melinda Gates Foundation, to tackle diseases, solve food shortages in Africa and alleviate poverty.

In a recent conference in California, Gates reveals a less public agenda of his philanthropy – population reduction, otherwise known as eugenics.

Gates made his remarks to the invitation-only Long Beach, California TED-2010 Conference, in a speech titled, “Innovating to Zero!.”

Along with the scientifically absurd proposition of reducing man-made CO2 emissions worldwide to zero by 2050, approximately four and a half minutes into the talk, Gates declares,

“First we got population. The world today has 6.8 billion people. That’s headed up to about 9 billion. Now if we do a really great job on new vaccines, health care, reproductive health services, we lower that by perhaps 10 or 15 percent.”

Watch this clip for yourself if you haven’t seen it yet, as he builds false premise upon false premise, like they all do as if we’re stone cold idiots, and then he gives his chilling solution on how to “Innovate to Zero”…

The Decade of Death

By the way, they’ve set a goal for their vaccine program they love so much. Is this a signal to their own?

Bill and Melinda Gates announced today that their foundation will commit $10 billion over the next 10 years to help research, develop and deliver vaccines for the world’s poorest countries.

And Not Just Vaccines, Folks…

Besides vaccines, the Gates are funding 10 different projects researching new contraception methods, including their latest that involves sterilizing men by putting ultrasound on their testes. (Nice one, Bill. Hope you’re trying it out nightly.) 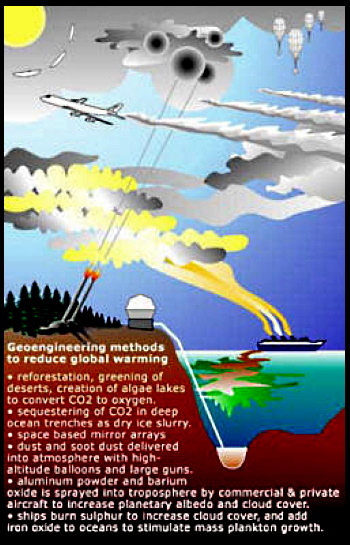 But more importantly, the Gates of Hell also fund two other major thrusts towards the destruction of earth’s eco-system and the extermination of its inhabitants:

Bill Gates has already proven his interest in geoengineering schemes with his earlier co-patent filing for reducing the intensity of killer hurricanes.

So perhaps we’re not too surprised that Science Insider has dug up the Microsoft chairman’s past projects on altering the Earth’s climate, ranging from filtering carbon dioxide to reflecting sunlight via brighter clouds. Source

It seems that not only will genetically modified salmon enter the environment along with unforeseen changes, but a new self-sterilizing mosquito may be joining them.

The plan, concocted by United Nations’ Office for the Coordination of Humanitarian Affairs, involves creating genetically modified mosquitoes that either kill or sterilize themselves.

The United Nations’ aim is to combat Dengue fever through the genetic manipulation of nature. 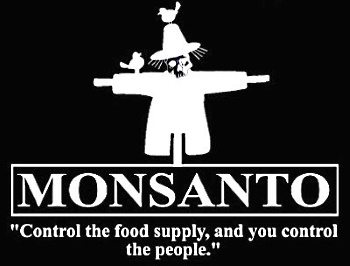 Besides funding and profiting tax free from this horrific company, there’s an ‘image problem’ there too for which they’re trying to use Bilderberg Bill and Melinda.

The immediate impact of these partnerships is to enhance the public image of Gene Giants that are donating royalty-free genes to needy farmers.

But the longer-term goal is to create the “enabling environments” (bio-safety regulations, intellectual property laws, positive media coverage to promote public acceptance) that will support the market introduction of genetically engineered crops and related technologies. 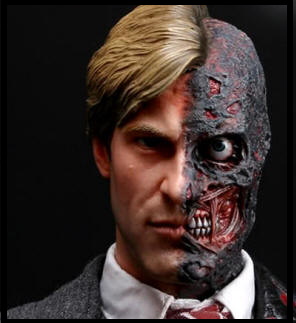 The Elite Call To Arms?

For those of you ‘awake and aware’ to what’s going on, that the world’s self-appointed ‘elite’ are planning a great ‘culling of the herd’ comes as no surprise. What’s remarkable is how blatant they’ve become about the subject.

And the Bill and Melinda Gates (of Hell) Foundation is the new poster child and sanitizing ploy.

But while every effort is being made to give the Gates Foundation a benign, philanthropic appearance, their primary program is clearly population reduction, just wrapped in brighter elitist “do gooder” package.

“Awwwww. Look how they’re giving back and leading these new technologies…”

But they’re throwing everything at it. And telling the others it’s time to throw in as well.

“A Time To Give, Brethren”

Obama called for the Oval Office meeting, which also included Gates’ wife, Melinda, to discuss the Giving Pledge project, started by Buffett and Gates to encourage wealthy U.S. individuals and families to give most of their fortunes to charity, the administration official said, speaking on condition of anonymity. Source

The old money will soon be worthless when we go through the ‘transition’ they have planned for us.

“Use it for a good cause men. We’re going to make the earth our own private country club!”

Why do you suppose they just locked up supplies of all the world’s natural seeds in an underground vault in Norway, but are busy altering the genetic make up of the seeds WE’RE supposed to eat?

And why are they feverishly burrowing their monstrous underground cites while trashing the environment on the surface of the earth?

Oh, you don’t know about that?

Or don’t believe it or “they woulda told us”?

Please, pull your head out. 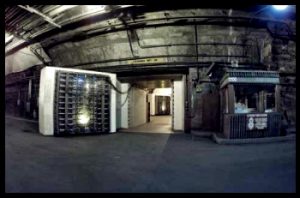 Are they preparing to board their underground ‘arks’?

Would you rather just let the train run over you and I and others not say anything?

Read up on “depopulation” and “eugenics” and you’ll find this has been their MO for centuries, periodically “culling the herd” with wars and epidemics, gutted economies and famines, all while keeping the world in one form of social slavery or another.

It’s nothing new. It’s just that the expanding growth of humanity is accelerating at such a rate, our numbers frighten them, and besides, they want all those resources for themselves.

Have you noticed they tend to hoard slightly?

The Rothschilds alone are worth an estimated 500 trillion dollars… with a ‘T’. The queen of England and the Vatican could bail out AND support half the world.

They’re not real big on sharing if you haven’t noticed, yet they make you feel guilty for devouring the earth’s resources.

Why believe anything they say?

This is how they view us.

Bill Gates is one of many eugenicists, but he’s channeling gobs of money and a lot of perceived clout, and apparently they think he has the image to pull this off.

That global warming and the other scams still have such traction is hard to believe, but that’s the image the media is portraying. And people are swallowing it, I’m sorry to say, and will likely sit back and watch our demise and blame themselves for it.

A neighbor mentioned the weird yesterday and added, “Do you think it’s God’s way of punishing us for what we’ve done to the planet?”

The manipulated masses have been so dumbed down and indoctrinated, if the adulterated planet doesn’t kill them, they will practically volunteer for death to reduce their carbon footprint. That’s the cumulative effect and logical deduction you could arrive at. And it’s all by design. 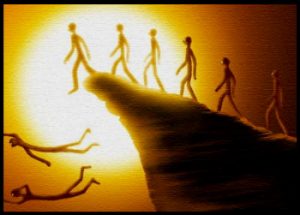 It’s amazing to behold. People get all snotty about their energy saving Prius or recycling efforts, while joining hands and singing kumbaya with benign exterminator Bill and his conniving ilk over ‘the woes of global warming and human swarming’.

Little do they know what their “final solution” really is.

This mass mind manipulation of guilt and lies is the drumbeat of the elites, while we sw-allow their planet destroying programs and march into the chemtrail sunset trying to eliminate our carbon footprints.

Only one way to do that…

How manipulated are you?

Stay conscious. They’re spraying hard, closing down on our food supply, and more fabricated troubles are on their way.

Keep your loved ones close and spread the word to the hungry.