In August 2019, five months before the onslaught of the Covid-19 crisis, two of the largest Worldwide Pharma conglomerates decided to join hands in a strategic relationship which barely made the headlines.

In an August 2019 Press release GSK confirmed the formation of a major partnership with Pfizer entitled the Consumer Health Joint Venture:

GlaxoSmithKline plc (LSE/NYSE: GSK) today announced that it has completed its transaction with Pfizer to combine their consumer healthcare businesses into a world-leading Joint Venture.

While emphasizing that the relationship is limited to “trusted consumer health brands”, the agreement is nonetheless far-reaching. It includes financial procedures as well as possible joint multibillion dollar investment projects.

While it does not constitute a merger, the GSK report points to selective integration (implying de facto collusion) in areas of marketing and distribution:

… the Joint Venture [GSK-Pfizer] will focus on completing the integration [in consumer health products] of the two businesses, which is expected to realise annual cost savings of £0.5bn by 2022 for expected total cash costs of £0.9 billion and non-cash charges of £0.3 billion. Up to 25% of the cost savings are intended to be reinvested in the business to support innovation and other growth opportunities.

At present, five multinational companies including GSK and Pfizer control 80% of the global vaccine market. Under the agreement between the two companies, GSK-Pfizer is slated to play a dominant and coordinated role in regards to the Covid-19 vaccine. 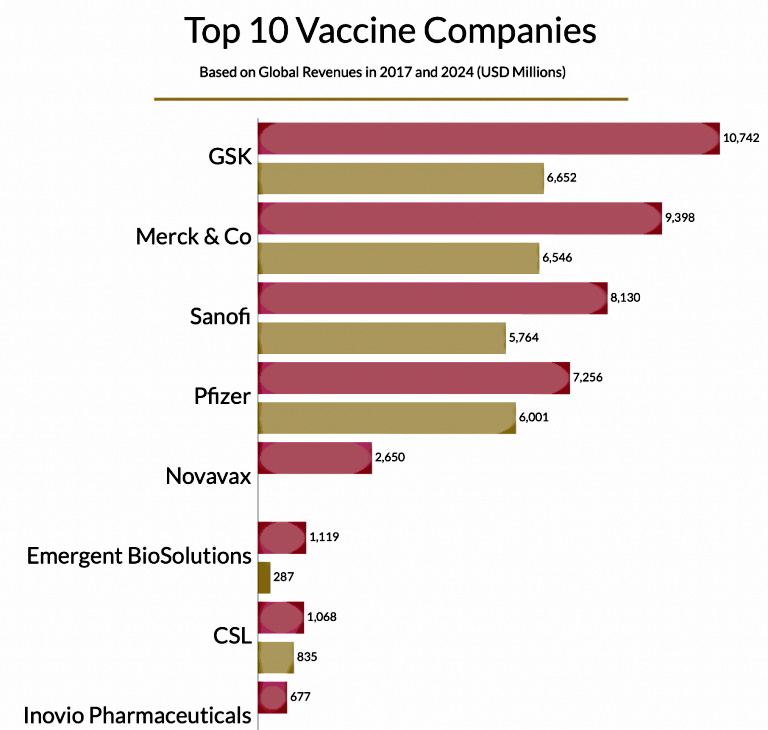 This GSK-Pfizer relationship also encompasses a network of  partner pharmaceutical companies, research labs, virology institutes, military and biotech entities, etc. many of which are currently involved in the Covid vaccine initiative.

The Covid vaccine is a multibillion dollar operation which will contribute to increasing the public debt of more than 150 national governments.

Supported by the fear campaign, Money rather than Public Health is the driving force behind this initiative:

“The completion of the joint venture with Pfizer marks the beginning of the next phase of our transformation of GSK. This is an important moment for the Group, laying the foundation for two great companies, one in Pharmaceuticals and Vaccines and one in Consumer Health.”  (GSK, August 1, 2019,  emphasis added)

While the two companies had envisageda “separation” clause following a process of restructuring, GSK and Pfizer have nonetheless integrated their decision making, specifically with regards to the vaccine market:

“With our future intention to separate, the transaction also presents a clear pathway forward for GSK to create a new global Pharmaceuticals/Vaccines company, with an R&D approach focused on science related to the immune system, use of genetics and advanced technologies,  …  Ultimately, our goal is to create two exceptional, UK-based global companies, with appropriate capital structures” (GSK)

What is at stake is the de facto formation of a Big Pharma Worldwide monopoly with a global network of “partners”.

Most of the so-called 125 (“small pharma”) candidates are involved in subcontracting (out-sourcing) manufacturing and marketing activities on behalf of the Big Pharma conglomerates.

The COVAX Initiative and Big Pharma

The COVAX initiative launched in April 2020 was intended to facilitate the Worldwide  distribution of the Covid vaccine. It is coordinated by the Coalition for Epidemic Preparedness Innovations (CEPI), GAVI, the Vaccine Alliance, and the World Health Organization (WHO) (all of which are partially funded by the Gates foundation).

In turn, the Gates foundation is a major shareholder of the Big Pharma vaccine conglomerates including GSK and Pfizer:

Sanofi and Glaxosmithkline were awarded about $2.1 billion in July from the U.S. Operation Warp Speed to support development and large-scale manufacturing of their adjuvanted recombinant protein subunit vaccine, providing the federal government with 100 million doses. The companies also have supply deals with the U.K., Canada and Gavi, an international vaccine alliance. (BioWorld, December 202o, emphasis added)

The GSK-Pfizer joint venture alliance is being used to extend their control over vaccine sales and production in all major regions of the World including China and Latin America, through a nexus of corporate and scientific partnerships.
.
Other major actors are France’s Sanofi which acts in partnership with GSK, Moderna which has ties to Pfizer, Merck, Astrazeneca and Johnson and Johnson.

The November 2020 Launching of the Covid Vaccine

Or did Pfizer, Moderna  “go straight to human “guinea pigs.”? Human tests began in late July and early August. “Three months is unheard of for testing a new vaccine. Several years is the norm.” 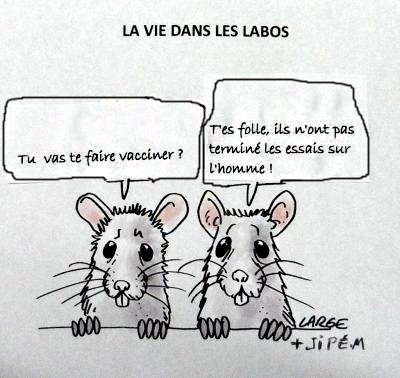 Our thanks to Large and JIPÉM

This caricature by Large + JIPÉM  explains our predicament:

Mouse No 1: “Are You Going to get Vaccinated”,

Mouse No. 2: Are You Crazy, They Haven’t finished the Tests on Humans”

And why do we need a vaccine for Covid-19 when both the WHO and the US Center for Disease Control and Prevention (CDC) have confirmed unequivocally that Covid-19 is  “similar to seasonal influenza”.

The unspoken answer is “Big Money”.

The plan to develop the Covid-19 vaccine is profit driven. It is supported by corrupt governments serving the interests of Big Pharma.

The US government had already ordered 100 million doses back in July 2020 and the EU is to purchase 300 million doses. It’s Big Money for Big Pharma, generous payoffs to corrupt politicians, at the expense of tax payers.

The objective is ultimately to make money, by vaccinating the entire planet of 7.4 billion people for SARS-CoV-2.

The Covid vaccine in some cases envisages more than one shot. If this plan were to go ahead as planned, it would be the largest vaccine initiative in World history and the biggest money making operation for Big Pharma.

Moreover, under the Pfizer Moderna initiative, the mRNA vaccine will have an impact on the human genome.

And there is also the project promoted by GAVI to insert a “digital passport”.

It’s called the ID2020 Agenda, which, according to Peter Koenig constitutes “an electronic ID program that uses generalized vaccination as a platform for digital identity”.

The Founding Partners of ID2020 are Microsoft, the Rockefeller Foundation and the Global Alliance for Vaccines and Immunization (GAVI) among others.

It is worth noting the timeline: The ID2020 Alliance held their Summit in New York, entitled “Rising to the Good ID Challenge”, on September 19, 2019, exactly one month prior to nCov-2019 simulation exercise entitled Event 201 at John Hopkins in New York:

Is it just a coincidence that ID2020 is being rolled out at the onset of what the WHO calls a Pandemic? – Or is a pandemic needed to ‘roll out’ the multiple devastating programs of ID2020? (Peter Koenig, March 2020)

ID2020 is part of a “World Governance” project which, if applied, would roll out the contours of what some analysts have described as a Global Police