The Secretive Sterilization Program Behind the Tetanus Shot

The Secretive Sterilization Program Behind the Tetanus Shot

How the ubiquitous use of the tetanus shot may be behind the US and world population decline. 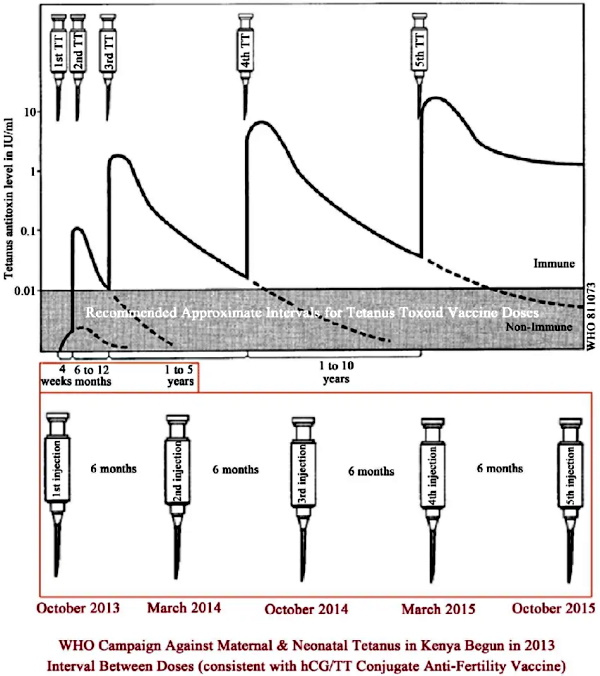 After years of hearing about the planet’s overpopulation as a young woman, I made a very clear and conscious decision not to have children. I considered this my “contribution” to the earth, not to add an additional burden upon our natural resources.

Little did I know that I may have been duped like many other women I know who made a similar decision. Now, if I had known the truth, that our planet, particularly the US birth rates, have been in decline for… well, decades now, I may have made a very different decision.

A lagging US birthrate continues to be a little-known fact. Ask the average American, and they would swear to you that we are on a massive overpopulation curvature.

Dr. Carrie Madej tipped me off a year ago that the US was utilizing the tetanus shots as an undercover sterilization campaign. She told me that she knew firsthand that the more a woman receives a tetanus shot, the more likely she will be unable to conceive.

I had always suspected a host of reasons for the global population decline, most of which are environmental. However, it never dawned on me that tetanus shots could play a huge role.

Official U.S. birth data for 2020 showed that births have been falling almost continuously for over a decade. For 50 years now, the U.S. total fertility rate has remained near or below the “replacement” level of 2.1.  The total fertility rate estimates the average number of babies a woman would have in her lifetime; 2.1 is the level needed for a generation to replace itself.

It wasn’t just Dr. Carrie Madej pointing out a correlation between infertility and tetanus shots.

A brouhaha had been stewing in Africa in the early 1990s when the Kenya Conference of Catholic Bishops and the Kenyan Health Ministry were going head to head in a battle over the safety of a tetanus vaccine administered to women in the country.

In November 1993, a Catholic publication appeared claiming an abortifacient vaccine was being used as tetanus prophylactic. Catholic church leaders began accusing the WHO and UNICEF of nefariously lacing tetanus shots they had given to girls and women of childbearing age containing the anti-fertility drug human chorionic gonadotropin (hCG).

In October 2014, 6 vials were obtained by Catholic doctors and were tested in 6 accredited laboratories. Again, hCG was found in half the samples.

But it wasn’t just Kenya authorities making this accusation.

It was also in 1994 that the Pro-Life Committee of Mexico became suspicious of a tetanus campaign that excluded all males and children and called for multiple injections of the vaccine in only women of reproductive age.

We have been led to believe that one tetanus injection should protect for at least ten years. Yet, these tetanus protocols in Mexico and Africa targeted childbearing women to be injected every six months.

Continuously denying the accusation, in 2014, the WHO and UNICEF made a public statement expressing “their deep concern about the misinformation circulating in the media on the quality of the Tetanus Toxoid (TT) Vaccine in Kenya.”

They neglected to include in their statement that the WHO announced a “birth-control vaccine” for “family planning” in 1976 when WHO researchers had “conjugated tetanus toxoid (TT) with human chorionic gonadotropin (hCG), producing a “birth-control” vaccine. Conjugating TT with hCG causes pregnancy hormones to be attacked by the immune system. Expected results are [spontaneous] abortions in pregnant females and/or infertility in recipients not yet impregnated. Repeated inoculations prolong infertility.”

Similar tetanus vaccines laced with hCG have been uncovered in the Philippines and Nicaragua. In addition to the WHO, other organizations involved in the development of an anti-fertility vaccine using hCG include the Bill and Melinda Gates Foundation, the Rockefeller Foundation, the UN Population Fund, the UN Development Programme, the World Bank, the Population Council, the All India Institute of Medical Sciences,  the US National Institute of Child Health and Human Development, and Ohio State universities.

Once again, we have another criminal case of uninformed consent. Women who have no clue these shots have been preventing pregnancies or causing spontaneous abortions. The tetanus shots are possibly another example of medical malfeasance of the highest order.

How do we respond? First of all, know that the risk of a person contracting tetanus is very low unless he/she is an agricultural worker and working near animal manure. It’s not rust that gives us tetanus; it’s manure. The medical establishment never tells us this. If you are a young woman or girl that intends on becoming a mother someday, perhaps think twice about the tetanus shot. The more shots you receive, the higher the risk of not being able to conceive.

If you want more in-depth information, I recommend watching (and sharing) the newly released 30-minute documentary, “Infertility: A Diabolical Agenda.”

Lastly, spread the word. At the very least, let women know they should seriously investigate before deciding whether or not to take a tetanus shot. Knowledge is power.