The #SyriaStrikes: An Open Source Investigation

As you know by now, President Trump ordered missile strikes on the Al Shayrat airfield in Syria Thursday night. Starting at 8:40 PM Eastern Daylight Time, the US guided-missile destroyers USS Ross and USS Porter launched a total of 59 Tomahawk Land Attack Missiles. This being the age of the internet, you can watch the missiles being launched (at a cost of $1.41 million a pop) in a series of YouTube videos kindly supplied by the Pentagon.

For his part, the teleprompter-in-chief handled his ceremonial role perfectly, intoning all the usual poliltical blather that we have come to expect from the Bush/Clinton/Bush/Obama/Trump puppets. To wit: “Tonight, I ordered a targeted military strike blah de blah de blah vital national security interest of the United States da dee doo dee dum no dispute that Syria used banned chemical weapons etc., etc., I call on all civilized nations to join us yadda yadda.” You get the gist. (But if you really must, you can watch the whole statement here.)

And, as a man is known by the company he keeps, look at the warmongers, neocons, terrorists and other loons who are lining up to sing Trump’s praises over this glorious action:

Although the full aftermath of the strikes is still unknown as of press time, early reports from the Syrian national news service indicate that the strike killed 9 civilians, including 4 children. Russian sources, meanwhile, claim that only 23 of the 50 Tomahawk missiles actually reached their target, the Al Shayrat airfield, destroying a material storage depot, a training facility, a canteen, six MiG-23 aircraft in repair hangars and a radar station. 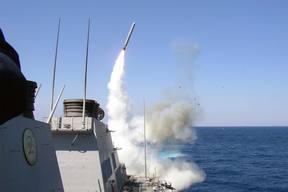 Syrian armed forces command are confirming that six military personnel were killed in the attack. The Al Ekhbariya TV channel broadcast a statement from the Syrian Armed Forces detailing the six deaths and an unspecified number of injuries. “The US aggression is a violation of all international norms and an attempt to weaken the combat capability of the Syrian army in the fight against terrorist groups,” the Syrian armed forces command said. “Our response to this attack will be the determination to crush terrorists on Syrian soil wherever they are.”

But whatever damage the individual missiles may have inflicted in Syria, they have the potential to inflict even greater damage in the arena of global geopolitics. In this regard’s, Russia’s response has been of particular interest.

In an official statement, Moscow has labeled the attack “an act of aggression against a UN member state,” calling for an emergency meeting of the UN Security Council. Other reports quote a Kremlin spokesman who says that Putin believes the attack was done under a “trumped-up pretext.”

Most worryingly, Russia has suspended the flight data sharing agreement with the US that coordinates the two powers’ activity over Syrian airspace and prevents missiles or sorties being shot down by accident. This was the same communication hotline that the Pentagon used to notify Russia about the strike before it happened. The scrapping of the agreement can only be read as Russia’s signal that future attempts by the US to breach Syrian airspace will be treated as a hostile action and dealt with militarily.

Now Russia is announcing new measures to bolster Syria’s air defense system and expand its own military presence in the country.

However frayed US/Russian relations have become in this age of “Cold War 2.0,” they just got a hell of a lot worse.

In fact, it was only one week ago that everything seemed to be going in the exact opposite direction. John McCain was furious with Rex Tillerson for daring to suggest that the Syrian people should decide what happens with Assad. ISIS was on the run and the “rebels” (read: terrorist insurgency) seemed all but broken. Peace talks were about to put the final nail in the coffin of the six year-long quest to topple the Syrian government… 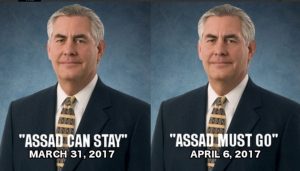 …and now this. So what happened? Well, we have two stories to choose from.

The warmonger’s story is that Assad, being the most insane and suicidal leader in the history of the world, decided to snatch defeat from the jaws of victory and gas some of his own citizens just as the world was contemplating leaving him alone.

The alternative story is that an airstrike on Idlib hit a chemical weapons stockpile that the terrorists had stored there, thus releasing the material on their own population.

Points in favor of the alternative story are numerous. They include:

So we arrive back at the key question about this series of events: cui bono?

Well, the warmongers get their Path to Persia.

The cabal that started the ball rolling in Syria and created I-CIA-SIS get to push their war through to its conclusion.

The oiligarchs get an oil boost just as an unexpected glut started to bite into their profits.

The neo-neocons are closer than ever to getting their lusted after war with Russia.

Raytheon and the other military-industrial parasites get a nice payday.

And all those #MAGA Trump train riders get a nice welcome dose of reality.

But it’s not all bad news. At least we can laugh at the site of CNN anchors being shocked speechless by an unscripted moment of reality.

This is obviously an unfolding, ongoing news story.