For much of the past month national media has been replete with headlines decrying “vaccine hesitancy” as coronavirus infection rates continue on the decline. Amid dire “warnings” this may “hinder” herd immunity goals, local and federal health agencies are busy pouring vast resources into vaccine-promoting ad campaigns. “The United States has a surplus of coronavirus vaccine doses on its hands, and long gone are the days when people waited hours to get jabbed. Dwindling demand has forced governors and mayors to get creative,” The Washington Post observed this week.

But one initiative in Dallas County in Texas is going far beyond anything we’ve seen thus far, and as many on social media have observed, it is downright creepy and bizarre in its brazenly coercive optics. Texas has long been fully opened and bars and restaurants are now packed, but vaccine sites are not, apparently. So naturally Dallas County Health and Human Services (DCHHS) thought it would be a good idea to go to the bars with the vaccines… along with uniformed US Army National Guard soldiers.

On a busy Friday night in a Dallas neighborhood widely dubbed the “live music capital of North Texas” US military personnel entered popular venues, including random convenience stores (as seen in the video), to coerce coax unvaccinated individuals to get the jab on the spot.

“So right now we are going to give a COVID vaccine to someone inside a 7-Eleven – this is what community service looks like and getting the community vaccinated,” a video narrator states.

The Dallas County HHS featured its efforts in a short social media clip showing a couple of US Army solders in full camouflage fatigues flanking a top Dallas health official.

“By getting vaccinated you’ll be able to enjoy going out again knowing that you’re safe & protected” – except of course the people in the popular nightlife area this past weekend were already clearly quite comfortable “going out again” to have a good time. A local CBS-DFW news clip said of the new Dallas HHS-National Guard campaign that Dallas County is hoping to attract the “younger crowd”.

Not only were multiple uniformed federal troops manning a “pop-up” vaccine table on a Deep Ellum street, but they were filmed going into the venues to confront encounter people.

The local CBS affiliate emphasized the campaign “targets” young people (as the above local news coverage of the initiative spells out exactly).

“Specifically where the younger people are,” as “this week the FDA announced it’s expanding emergency use authorization for Pfizer COVID-19 vaccine for those 12 and up,” CBS said. And one top Dallas health official told the broadcaster: “That’s why we are here” …as uniformed soldiers stood behind him.

One 7-11 clerk who agreed to receive the shot was asked by the troops: “How do you feel that you got the vaccine right here, at work, by US soldiers?”

They was walking around Deep Ellum last night randomly trying to vaccinate people and bar goers who haven’t been vaccinated yet in dallas pic.twitter.com/AQ3dH44Lbj

The man then extolls the benefits of being a US citizen – which given the weird optics of the whole encounter between the jab-proffering Army personnel and an apparently somewhat recent immigrant to the US, brings up some serious questions…

For starters, when a “vaccine crew” of literal uniformed soldiers randomly walks up to citizens saying they “need to get vaxxed”… do the individuals understand it’s entirely an option and not an authoritative mandate? And would (in the example of the video) a recent immigrant to the country or even new American citizen understand the nature of the encounter? 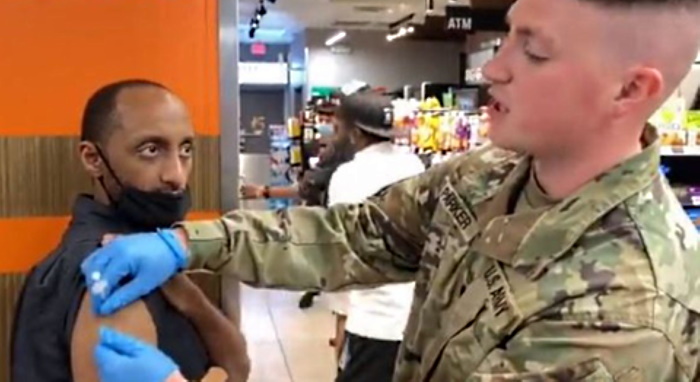 But of course this appears to be the entire point…

“Since Feb. 24, it [Dallas] has served as one of several federal vaccination sites run by the U.S. military and Federal Emergency Management Agency aimed at increasing immunity in underserved and highly vulnerable communities,” The Dallas Morning News wrote previously.

With vaccine hesitancy on the rise, and with President Biden’s new bizarre announcement that “Those who are not vaccinated will end up paying the price” – is the new “creative” strategy all about putting “muscle” in terms of serious federal authority in the room (or on busy nightlife venue streets) for added pressure?

PRES. BIDEN: “Those who are not vaccinated will end up paying the price.” pic.twitter.com/qQ7cAyoYUW

Are vaccine-bearing troops coming to a neighborhood near you?

Connect with Tyler Durden at ZeroHedge