US Airlines: ‘Dangerous 5G Rollout Will Grind Commerce to a Halt’

US Airlines: ‘Dangerous 5G Rollout Will Grind Commerce to a Halt’

Earlier this month, 21WIRE raised the alarm about the dangerous consequences of western governments’ reckless 5G roll-out, which will leave airlines exposed to to incredible risks in terms of navigation interference due to the untested 5G C-band signal which will disrupt modern passenger and cargo airplanes that rely on sensitive radio altimeters to calculate their altitude above the ground in low visibility conditions. In addition, the 5G signal could also affect airplane’s essential safety features.

Due to pressure from corporate giants like AT&T and Verizon and other Big Tech firms, government agencies have opted to ignore this risk and press ahead anyway with this experimental unregulated technology.

Now airlines are finally speaking out about the blatant collusion between 5G stakeholders and corrupt government agencies.

Paul Shiver from The Blaze writes…

As telecommunication giants Verizon and AT&T prepare to roll out their hotly anticipated new 5G service on Wednesday, major U.S. airlines are warning that the launch will result in “catastrophic” disruption for the aviation industry.

In a letter sent Monday to Biden administration officials, a group of airline CEOs stressed that the forthcoming C-Band 5G deployment would ground “huge swaths” of the U.S. fleet and “could potentially strand tens of thousands of Americans overseas.”

“Unless our major hubs are cleared to fly, the vast majority of the traveling and shipping public will essentially be grounded,” they said in the letter, viewed by NBC News.

The airline executives stated plainly that the rollout could be accompanied by an aviation crisis the likes of which the country has never seen.

“To be blunt, the nation’s commerce will grind to a halt,” they stated plainly.

The letter was reportedly signed by the CEOs of American Airlines, United Airlines, Delta Air Lines, Southwest Airlines, and Jet Blue, as well as by leaders of shipping companies UPS and FedEx.

Fifth-generation wireless technology, known simply as 5G, is expected to deliver ultra-fast internet speeds, massive capacity, and increased connectivity to users. However, the chief executives argued that, as it stands, 5G signals would interfere with safety equipment that pilots rely on to take off and land in inclement weather.

CNBC noted that the Federal Aviation Administration has indeed warned that potential interference could affect sensitive airplane instruments such as altimeters, which measure the distance from the bottom of an aircraft to the ground during low visibility operations.

As of Sunday, the FAA had only cleared an estimated 45% of the U.S. commercial airplane fleet to perform low-visibility landings at airports where the 5G service would be deployed.

“This means that on a day like yesterday, more than 1,100 flights and 100,000 passengers would be subjected to cancellations, diversions, or delays,” the CEOs cautioned in the letter, adding, “Immediate intervention is needed to avoid significant operational disruption to air passengers, shippers, supply chain and delivery of needed medical supplies” 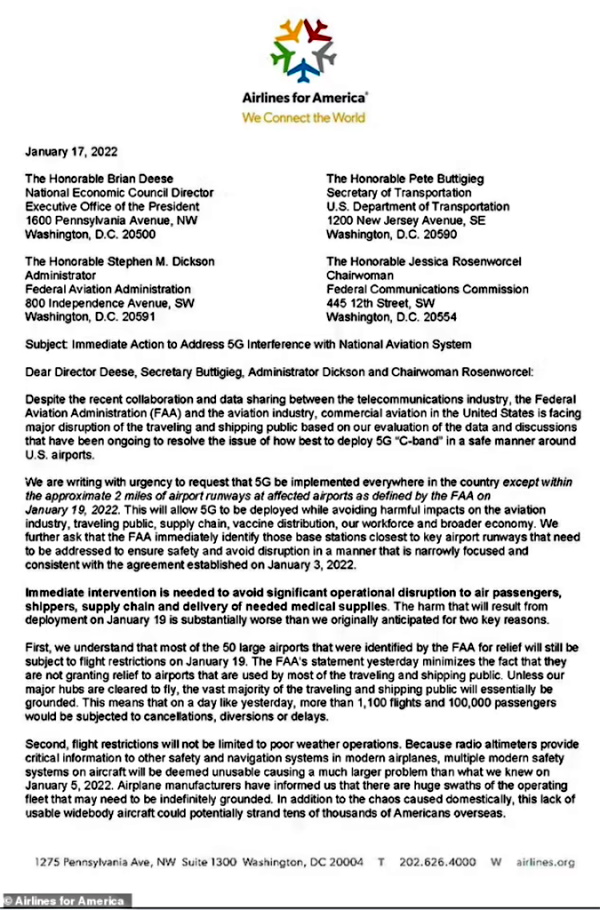 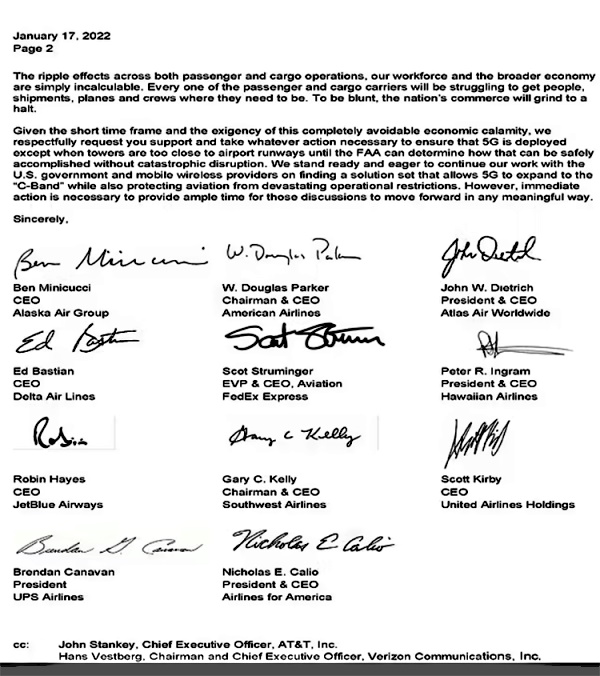 Continue this story at The Blaze