Data released today by the Centers for Disease Control and Prevention (CDC) showed the total number of reports (including foreign and U.S.) of deaths following COVID vaccination, across all age groups, surpassed 12,000. 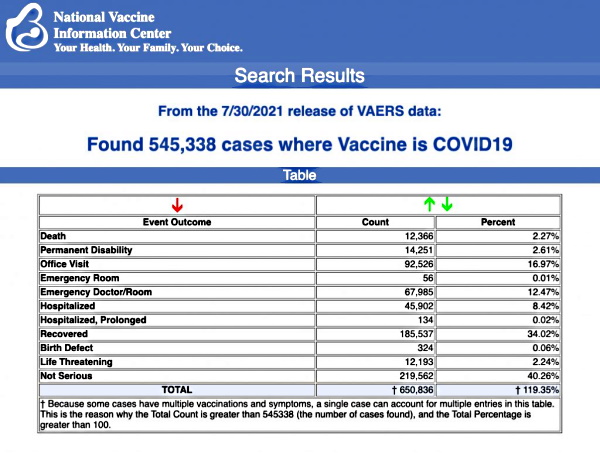 The U.S. Food and Drug Administration (FDA) has accelerated its timeline to fully approve Pfizer’s COVID vaccine — planning to complete the process by the beginning of September, people familiar with the effort told The New York Times.

President Biden said last week he expected a fully approved vaccine in early fall. But the FDA’s unofficial deadline is Labor Day or sooner, according to The Times.

The agency said in a statement its leaders recognized approval might inspire more public confidence and had “taken an all-hands-on-deck approach” to the work.

The FDA’s move is expected to kick off more vaccination mandates for hospital workers, college students and federal troops.

Federal regulators have been under growing public pressure to fully approve Pfizer’s vaccine ever since the company filed its application on May 7.

According to research published last week in Scientific Reports, vaccinated people may play a key role in helping SARS-CoV-2 variants evolve into those that evade existing COVID vaccines.

Researchers identified three specific risk factors that favor the emergence and establishment of a vaccine-resistant strain. They are: a high probability of initial emergence of the resistant strain; a high number of infected individuals; and a low rate of vaccination.

However, the analysis also showed the highest risk for establishing a vaccine-resistant strain occurs when a large fraction of the population has already been vaccinated but the transmission is not controlled.

The data is consistent with a study released last week by the Centers for Disease Control and Prevention which showed vaccinated people may transmit the Delta variant —  now responsible for 80% of COVID cases in the U.S. — just as easily as the unvaccinated.

As The Defender reported Aug. 3, World Health Organization (WHO) officials said they are still trying to understand why the Delta variant is more transmissible than the original COVID virus strain.

As COVID—especially Delta variant—surges among fully vaccinated, Brian Hooker, Ph.D., said the more variant deviates from original sequence used for vaccine, the less effective vaccine will be on variant.

“There are certain mutations in the Delta variant that, for example, allow the virus to adhere to a cell more easily,” said Dr. Maria Van Kerkhove, WHO’S technical lead on COVID, at a press briefing July 30. “There are some laboratory studies that suggest that there’s increased replication in some of the modeled human airway systems.”

The CDC warned lawmakers July 29 of new research indicating the Delta strain is more contagious than chickenpox. The variant also appears to have a longer transmission window than the original COVID strain, and may make older people sicker, even if they’ve been fully vaccinated, CNBC reported.

“For this reason, new variants of viruses that circulate widely through the population tend to become more transmissive but less pathogenic. In other words, they will spread more easily from person to person, but they will cause less damage to the host.”

Hooker said the more the variant deviates from the original sequence used for the vaccine, the less effective the vaccine will be on that variant, which could explain why fully vaccinated people are getting infected with the Delta variant.

But this isn’t the case for natural immunity, Hooker explained:

“The vaccine focuses on the spike protein, whereas natural immunity focuses on the entire virus. Natural immunity — with a more diverse array of antibodies and T-cell receptors — will provide better protection overall as it has more targets in which to attack the virus, whereas vaccine-derived immunity only focuses on one portion of the virus, in this case, the spike protein. Once that portion of the virus has mutated sufficiently, the vaccine no longer is effective.”

Offspring band boots drummer for refusing to get vaccinated

Pete Parada, drummer for the Californian rock band Offspring, said he was ousted from the band because he refused to get a COVID vaccine, despite having already had COVID and acquiring natural immunity.

“Since I am unable to comply with what is increasingly becoming an industry mandate, it has recently been decided that I am unsafe to be around, in the studio and on tour. I mention this because you won’t be seeing me at these upcoming shows. I also want to share my story so that anyone else experiencing the agony and isolation of getting left behind right now knows they’re not entirely alone.”

Parada, who had COVID more than a year ago, said he was medically advised not to take the vaccine due to his “personal medical history and the side-effect profile” of COVID vaccines.

Parada has a history of Guillain–Barré syndrome (GBS), a serious but rare autoimmune disorder linked to multiple vaccines, including COVID vaccines.

Parada said he was confident he could handle the virus again, but he could not handle another round of post-vaccination GBS, which dates back to his childhood and has become progressively worse over his lifetime.

In a series of tweets, Parada said he unequivocally supports informed consent — “which necessitates choice unburdened by coercion” — and does not find it “ethical or wise” to allow those with the most power, including government, corporations, organizations or employers to “dictate medical procedures to those with the least power.”

Some of the nation’s largest employers are mandating COVID vaccines, The New York Times reported this week.

Tyson Foods this week told its 120,000 workers in offices, slaughterhouses and poultry plants across the country they would need to be vaccinated by Nov. 1, as a “condition of employment.”

Microsoft, which employs roughly 100,000 people in the U.S., said it would require proof of vaccination for all employees, vendors and guests to gain access to its offices.

Last week, Google said it would require employees who returned to the company’s offices to be vaccinated, while Disney announced a mandate for all salaried and non-union hourly workers who work on site.

Walmart, the largest private employer in the U.S, Lyft and Uber mandated vaccines for white-collar workers but not for millions of frontline workers.

The moves brought praise from the White House.

“I want to thank Walmart, Google, Netflix, Disney, Tyson Foods for their recent actions requiring vaccination for employees,” President Biden said in a press briefing on Tuesday. “Look, I know this isn’t easy — but I will have their backs.”

“Others have declined to step up,” Biden said. “I find it disappointing.”

Despite multiple phone and email communications with many people at the CDC, and despite being told that our request was in the system and that someone would respond, we have not yet received answers to any of the questions we submitted. It has been 144 days since we sent our first email to the CDC requesting information.