Vaxxed vs Unvaxxed: Lawsuit Seeks to Protect Americans From Discrimination Based on Vaccination Status

In a federal complaint filed last month in the U.S. District Court of California, constitutional litigators Greg Glaser and Ray Flores presented results of a pilot study showing unvaccinated adults and children are healthier than their vaccinated counterparts.

On George Washington’s birthday, Feb. 22, constitutional litigators Greg Glaser and Ray Flores will be in federal court in Sacramento to request an order immediately protecting all Americans from discrimination based on vaccination status.

In the federal complaint filed December 2020 in the U.S. District Court of California — Eastern District, Sacramento, Glaser and Flores state:

“As a matter of national security, this constitutional case is respectfully brought by scientifically focused patriotic Americans, including United States military family members. The American population is currently in the process of being decimated by chronic illness, due to injured and dysfunctional immune systems … The Control Group dataset provides profound proof that vaccine exposure is in fact the primary cause of this nation’s current public health crisis.”

According to Glaser, here is the case in a nutshell:

“America is dying from the current trajectory of chronic illness. Our Control Group pilot survey proved it is the vaccines causing our nation’s demise. And even the government’s own admissions make it clear vaccines are unavoidably unsafe. There is no single agency such as the U.S. Food and Drug Administration that can be petitioned to heal the whole nation, nor a single law such as SB277 that can be overturned to heal this nation from the current trajectory. That is why Ray Flores and I are requesting comprehensive relief in the form of an executive order preventing discrimination based on vaccination status. If we prevail, then every American will be protected from mandatory vaccination.” 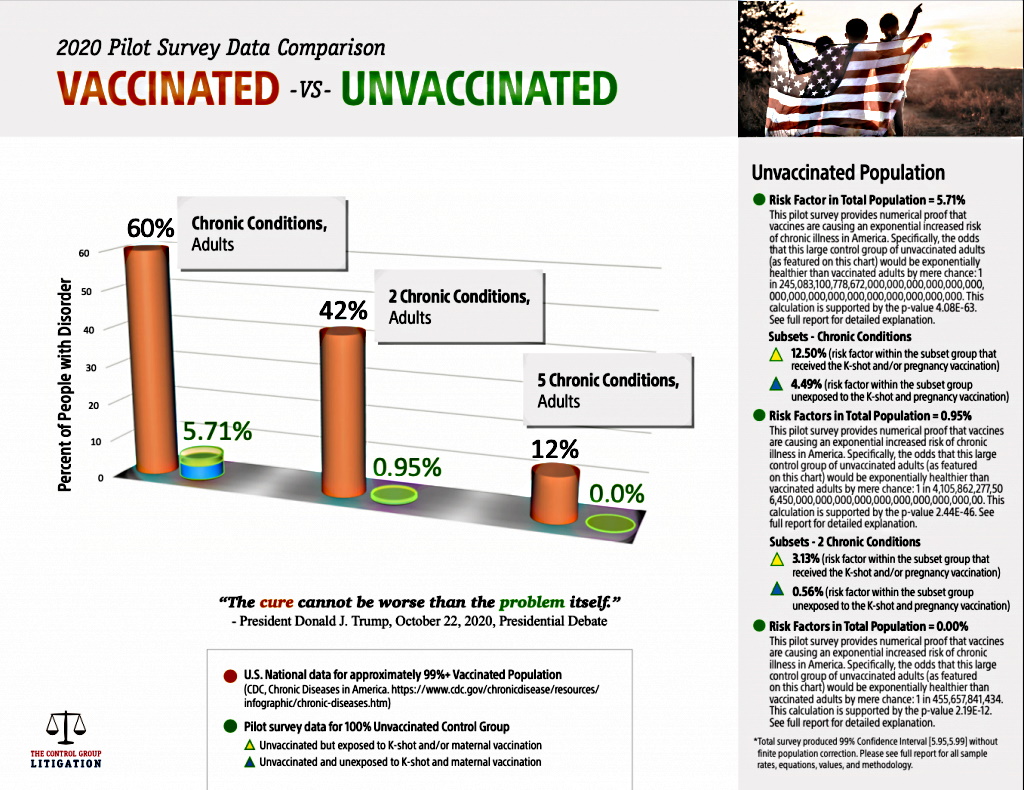 Glaser said he believes this case is the most comprehensive presentation of evidence to date on vaccine harm. For example, Glaser and Flores have 400+ top-level science exhibits offered for judicial notice, which requires the court to accept certain statements made by government officials and other authoritative sources. A key goal of this judicial notice technique is to help shift the legal burden to the state to prove vaccine safety. According to Glaser, because the State has no vaxxed versus unvaxxed study, the state cannot meet its legal burden.

Judicial Notice #1 connects all these chronic illnesses (i.e., digestive disorders, diabetes) to the immune system with the most authoritative citations on the planet.

Judicial Notice #2 shows that vaccines are dangerous and untested — once again all of these are authoritative citations the government cannot dispute.

And Judicial Notice #3 shows how vaccines are made and distributed through communist China.

Because the evidence is so voluminous, Glaser and Flores also filed infographics (demonstrative evidence) to help showcase some of the main points: Health Crisis In America, Vaccines Are Dangerous, Vaccines Are Made In Communist China.

A great deal of the complaint is devoted to insisting that control groups are necessary to the scientific method, and the court’s job is to preserve this particular vital evidence necessary to rescue America from the current trajectory of chronic illness.

Some evidence highlights from the case include:

All of the evidence filed in the complaint can be found on The Control Group litigation website.