Weather Warfare: Beware the US Military’s Experiments with Climatic Warfare

Weather Warfare: Beware the US Military’s Experiments with Climatic Warfare

‘Climatic warfare’ has been excluded from the agenda on climate change.

his article was first published by The Ecologist in December 2007.  It summarizes several in-depth and detailed articles written by the author on environmental modification (ENMOD) techniques for military use.

It should be noted that while the HAARP program based in Gakona, Alaska was closed down, the US Air Force which managed the HAARP project, nonetheless confirmed that ENMOD techniques for military use are slated to continue:

“We’re moving on to other ways of managing the ionosphere, which the HAARP was really designed to do,” he said. “To inject energy into the ionosphere to be able to actually control it. But that work has been completed.”

The ongoing debate on climate change including the Worldwide protest movement fails to acknowledge the role of climatic warfare, namely the deliberate manipulation of climate for military use.
.

Similarly, the mainstream media has failed to analyze the military dimensions of climate change.

A recent Associated Press (AP) “report” entitled “The superspreaders behind top COVID-19 conspiracy theories”,  directed against several authors and independent media including Global Research describes Michel Chossudovsky as “a professor emeritus of economics … and a conspiracy theorist who has argued the U.S. military can control the weather”. (emphasis added)

My response: “do you home work”. Sloppy journalism on this and other issues (including Covid).

There is a vast literature on weather modification for military use. The US Military can control the weather. And that is not a conspiracy theory.

I refer the distinguished AP journalists to consult the US Air Force document entitled “Weather as a Force Multiplier: Owning the Weather in 2025“ 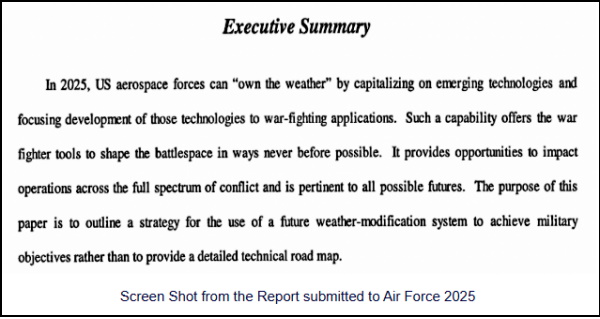 The causes must be carefully investigated. They are not attributable to CO2 Emissions.

There is however no evidence that these occurrences are the result of  “weather modification techniques” as defined by the US Air Force in “Weather as a Force Multiplier: Owning the Weather in 2025“

Yet at the same time, it should be be understood that advanced and sophisticated environmental modification techniques (ENMOD) are fully operational.

Rarely acknowledged in the debate on global climate change, the world’s weather can now be modified as part of a new generation of sophisticated electromagnetic weapons. Both the US and Russia have developed capabilities to manipulate the climate for military use.

Environmental modification techniques have been applied by the US military for more than half a century. US mathematician John von Neumann, in liaison with the US Department of Defense, started his research on weather modification in the late 1940s at the height of the Cold War and foresaw ‘forms of climatic warfare as yet unimagined’. During the Vietnam war, cloud-seeding techniques were used, starting in 1967 under Project Popeye, the objective of which was to prolong the monsoon season and block enemy supply routes along the Ho Chi Minh Trail.

The US military has developed advanced capabilities that enable it selectively to alter weather patterns. The technology, which is being perfected under the High-frequency Active Auroral Research Program (HAARP), is an appendage of the Strategic Defense Initiative – ‘Star Wars’. From a military standpoint, HAARP is a weapon of mass destruction, operating from the outer atmosphere and capable of destabilising agricultural and ecological systems around the world.

Weather-modification, according to the US Air Force document AF 2025 Final Report, ‘offers the war fighter a wide range of possible options to defeat or coerce an adversary’, capabilities, it says, extend to the triggering of floods, hurricanes, droughts and earthquakes:

‘Weather modification will become a part of domestic and international security and could be done unilaterally… It could have offensive and defensive applications and even be used for deterrence purposes. The ability to generate precipitation, fog and storms on earth or to modify space weather… and the production of artificial weather all are a part of an integrated set of [military] technologies.’

In 1977, an international Convention was ratified by the UN General Assembly which banned ‘military or other hostile use of environmental modification techniques having widespread, long-lasting or severe effects.’ It defined ‘environmental modification techniques’ as ‘any technique for changing –through the deliberate manipulation of natural processes – the dynamics, composition or structure of the earth, including its biota, lithosphere, hydrosphere and atmosphere, or of outer space.’

While the substance of the 1977 Convention was reasserted in the UN Framework Convention on Climate Change (UNFCCC) signed at the 1992 Earth Summit in Rio, debate on weather modification for military use has become a scientific taboo.

Military analysts are mute on the subject. Meteorologists are not investigating the matter and environmentalists are focused on greenhouse gas emissions under the Kyoto Protocol. Neither is the possibility of climatic or environmental manipulations as part of a military and intelligence agenda, while tacitly acknowledged, part of the broader debate on climate change under UN auspices.

Established in 1992, HAARP, based in Gokona, Alaska, is an array of high-powered antennas that transmit, through high-frequency radio waves, massive amounts of energy into the ionosphere (the upper layer of the atmosphere). Their construction was funded by the US Air Force, the US Navy and the Defense Advanced Research Projects Agency (DARPA). Operated jointly by the Air Force Research Laboratory and the Office of Naval Research, HAARP constitutes a system of powerful antennas capable of creating ‘controlled local modifications of the ionosphere’. According to its official website, www.haarp.alaska.edu , HAARP will be used ‘to induce a small, localized change in ionospheric temperature so physical reactions can be studied by other instruments located either at or close to the HAARP site’. 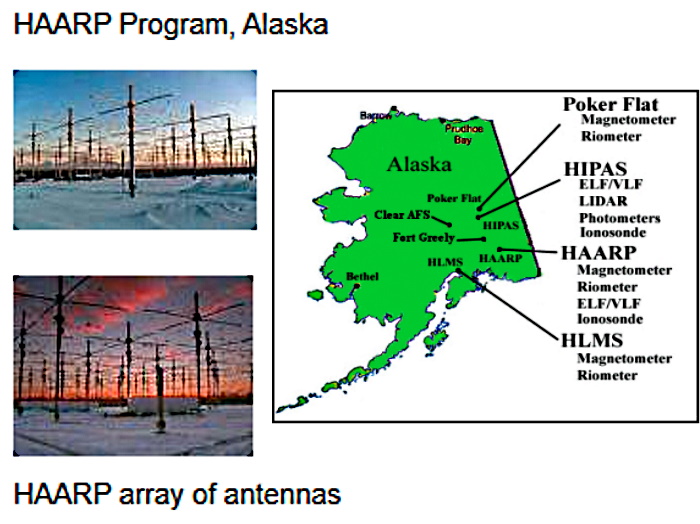 But Rosalie Bertell, president of the International Institute of Concern for Public Health, says HAARP operates as ‘a gigantic heater that can cause major disruptions in the ionosphere, creating not just holes, but long incisions in the protective layer that keeps deadly radiation from bombarding the planet’.

Physicist Dr Bernard Eastlund called it ‘the largest ionospheric heater ever built’. HAARP is presented by the US Air Force as a research programme, but military documents confirm its main objective is to ‘induce ionospheric modifications’ with a view to altering weather patterns and disrupting communications and radar.

According to a report by the Russian State Duma:

‘The US plans to carry out large-scale experiments under the HAARP programme [and] create weapons capable of breaking radio communication lines and equipment installed on spaceships and rockets, provoke serious accidents in electricity networks and in oil and gas pipelines, and have a negative impact on the mental health of entire regions.’*

An analysis of statements emanating from the US Air Force points to the unthinkable: the covert manipulation of weather patterns, communications and electric power systems as a weapon of global warfare, enabling the US to disrupt and dominate entire regions. Weather manipulation is the pre-emptive weapon par excellence. It can be directed against enemy countries or ‘friendly nations’ without their knowledge, used to destabilise economies, ecosystems and agriculture. It can also trigger havoc in financial and commodity markets. The disruption in agriculture creates a greater dependency on food aid and imported grain staples from the US and other Western countries.

HAARP was developed as part of an Anglo-American partnership between Raytheon Corporation, which owns the HAARP patents, the US Air Force and British Aerospace Systems (BAES).

The HAARP project is one among several collaborative ventures in advanced weapons systems between the two defence giants. The HAARP project was initiated in 1992 by Advanced Power Technologies, Inc. (APTI), a subsidiary of Atlantic Richfield Corporation (ARCO). APTI (including the HAARP patents) was sold by ARCO to E-Systems Inc, in 1994. E-Systems, on contract to the CIA and US Department of Defense, outfitted the ‘Doomsday Plan’, which ‘allows the President to manage a nuclear war’.Subsequently acquired by Raytheon Corporation, it is among the largest intelligence contractors in the World. BAES was involved in the development of the advanced stage of the HAARP antenna array under a 2004 contract with the Office of Naval Research.

The installation of 132 high frequency transmitters was entrusted by BAES to its US subsidiary, BAE Systems Inc. The project, according to a July report in Defense News, was undertaken by BAES’s Electronic Warfare division. In September it received DARPA’s top award for technical achievement for the design, construction and activation of the HAARP array of antennas.

The HAARP system is fully operational and in many regards dwarfs existing conventional and strategic weapons systems. While there is no firm evidence of its use for military purposes, Air Force documents suggest HAARP is an integral part of the militarisation of space. One would expect the antennas already to have been subjected to routine testing.

Under the UNFCCC, the Intergovernmental Panel on Climate Change (IPCC) has a mandate ‘to assess scientific, technical and socioeconomic information relevant for the understanding of climate change’. This mandate includes environmental warfare. ‘Geo-engineering’ is acknowledged, but the underlying military applications are neither the object of policy analysis or scientific research in the thousands of pages of IPCC reports and supporting documents, based on the expertise and input of some 2,500 scientists, policymakers and environmentalists. ‘Climatic warfare’ potentially threatens the future of humanity, but has casually been excluded from the reports for which the IPCC received the 2007 Nobel Peace Prize.