Weird Unemployment Figures? Or Something Else?

Weird Unemployment Figures? Or Something Else?

One of our regular readers noticed something, and shared it, and it’s significant enough I want to bring to people’s attention. In fact, this individual, P.T., noticed the same thing that Catherine Fitts mentioned during our last quarterly wrap up discussion. Since two people looking at the same numbers have come to the same conclusions, I want to see if anyone else has noticed anything.

Take a look at the following graph: 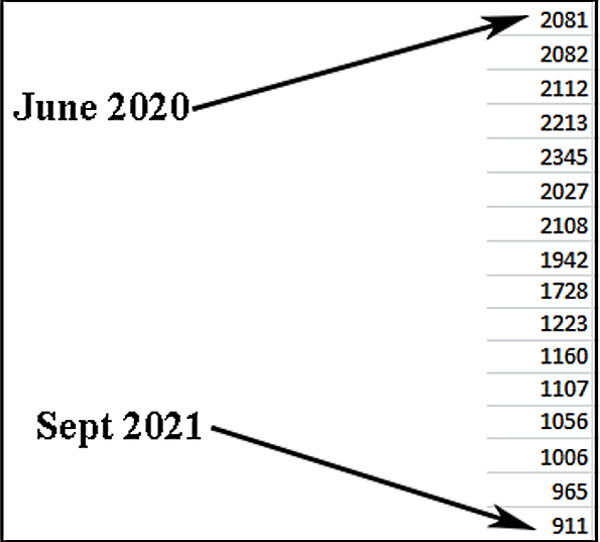 The source of this graph is here:

If you’ve been following some news, you might have heard that people in management are having difficulty hiring employees, and a variety of explanations have been offered for this. The article offers some other explanations:

The decline in the unemployment rate was not due to people “finding jobs.” It was due to over half a million of them deciding to walk off and not care. That’s a lot of people, and it’s the second consecutive month after a strong of mostly-good news in that regard since January. Last month also say a large (1.1 million) “walk off” rate.

What has changed? Mandates came in this spring and now its jab mandates, not just masks although the last couple of months might well have been both — specifically, many businesses going back to “Employees must wear one — ha-ha we told you things would be normal if you just took the shot. We lied.”

The only people who gained ground this month were those with 4-year degrees or better. Everyone else was stagnant. Work from home, anyone? No masks in your house, right? That doesn’t apply to people stocking shelves and moving material around though does it?

But that’s not the real trouble sign here. No, that’s the annual run rate of non-institutional population over the last 12 months. That is the total number of not-institutionalized people in the United States over the age of 16. The only ways to leave that count once you join it on your 16th birthday are to:

In case the figures in the chart are lost on you, here’s the explanation:

This number has run around 2 million on an annualized run-rate for a very long time. It is somewhat responsive to economic booms and busts with a 16-17 year lag; more people make children, but when they do it takes 16-17 years for them to show up in this figure. 16-17 years ago was literally the best of times; birth rates were rising as we came out of the Tech Wreck. Indeed in 2018 in December the annualized run rate was about 2.5 million. It was in December of 2019 too — right in front of Covid. And in December of 2020 it was back to more-or-less baseline at 2.1 million.

So where did the 1.2 million people that should have been added to the workforce over the last year go?

They didn’t go anywhere. They were added.

This means the real question is who got subtracted?

January of next year will be the adjustment month, as it always is. But these estimates are what they are and if they’re anywhere near accurate starting in February lots of people started dying who should not have died because the usual rate of death doesn’t move these figures.

Something did — and still is.

Or to put it more simply, subtract the September 2021 figures – 911 (oddly enough!) – from the June 2020 figure – 2081 – and you get 1.17 million, or approximately 1.2 million people that are simply missing. P.T. pointed out in the email sharing this chart that the “jabs” started in February 2021, the month recorded on the chart with the number 1728, and note the sharp decline the following month to 1223. His speculation – and mine – is that deaths from jabs are occurring in record numbers, and not being reported.

Now, I realize that the following is anecdotal, but another member of this website privately informed me that within a mile or so of their home, several homes are up for sale suddenly, and appear to be empty.

So what I wonder is, are people simply disappearing – whether by death or some other reason – and are they not being reported? Has anyone noticed a similar thing – missing people – in their neighborhood? Something is going on, and it doesn’t appear to be very kosher. I recall the incident of the Detroit television station that I mentioned in the Solari wrap-up, that solicited videos from its audience of people that their audience knew, who died un-jabbed. What the station received, however, was an inundation of comments, stories, and videos from people complaining about people who had been jabbed, and suffered adverse reactions, even death.

Whatever may be going on, chances are, it isn’t good…